On 'Here We Are,' songwriter Teagan Ward navigates the politics of empathy and rage 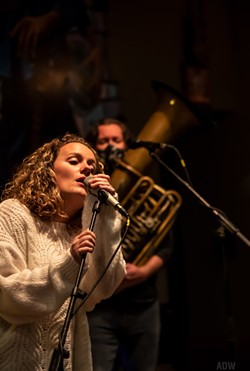 “One of frustration, I suppose,” she says.

Ward works in the travel industry, developing tour packages to be sold by travel agents. She’s also a singer and songwriter in the Rochester scene, with her band Teagan and the Tweeds.

“I was trying to use all of the time that I have, now that all of the things that I love — music and travel — are not doable right now,” she says. “And I found myself with a lot of writer’s block. I would sit and play my guitar for a long time and not really have anything come to fruition. So my girlfriend Sarah challenged me to stop getting on my soapbox at home about politics, and just the situation with the pandemic, and focus that energy into my writing.”

Stuck at home, living in open-ended social isolation, Ward focused on what was unfolding right in front of her.

Another headline across the screen…

That’s the opening line from her new single, “Here We Are,” released this week on most of the internet music outlets. So she has new music, and a gig of sorts coming up this weekend.

You don’t need to be told this: COVID-19 is a presence in every aspect of our lives. So Saturday’s 10th year of Homegrown, a January celebratory collaboration between Rochester’s Three Heads Brewing and Lovin’ Cup Bistro & Brews, has morphed into Homegrown 9½: Now With More Home because of the coronavirus pandemic. A livestream event starting at 2 p.m., it’s a survival triumvirate for these quarantine times: music, food, and beer.

For $160, you get the full Homegrown kit: a baker’s dozen of 16-ounce beers from local breweries, two "Good-bye to 2020" sampler glasses, and Rochester-centric food. You also get access to the livestream: culinary demos by local chefs, beer talk from the brewmasters themselves, and performances by The Honey Smugglers, The Moho Collective, Friday in America, and Teagan and the Tweeds. Tickets are available online through Lovin’ Cup.

Ward does a Tuesday-evening livestream show from a friend’s studio down the street from where she lives, or sometimes on location from a local bar or restaurant after it’s closed. It’s an attempt to stay relevant, not only for herself as a musician, but for those businesses. And she spent the summer playing venues such as Marge’s Lakeside Inn, outdoor gigs that the best information we had suggested were reasonably safe.

But now she understands firsthand why we have reached the point where so many people are socializing from the safety of their homes. In October, Ward tested positive for COVID-19. She experienced two days of “the worst flu-like symptoms I ever felt,” before easing out of it.

“It was terrifying then, because it didn’t seem as normal as it is now, which is so scary to say,” Ward says. “But I think, honestly, for me the scariest part for me was seeing the positive test results that I got back and thinking about the responsibility that I had, even more so, to just stay as safe as I could.”

That responsibility included telling everyone she had been around about her positive test, and urging them to get tested as well.

And then there’s her comment about how “it didn’t seem as normal as it is now.”

That’s the reality, an uncontrolled pandemic verging on killing 400,000 Americans. And there are all of those other “headlines across the screen” that Ward sings about: peaceful protesters on behalf of Black Lives Matters being tear-gassed and beaten; camo-clad, self-described militias armed with automatic weapons roaming the Michigan statehouse; a 17-year-old kid shooting people on the streets of Kenosha; a mob of Trump supporters surging through the Capitol building in Washington, D.C., defecating on the marble floors, assaulting cops and searching for Vice President Mike Pence so they can hang him because he can’t reverse the results of the November election. Ward even mentions the epic level of fires in California from early in 2020; environmental scientists tell us global warming is helping to create the conditions that are setting our planet afire, while the president insisted that raking up the dead leaves and sticks on hundreds of thousands of acres of forest floor would do the trick.

We’re trapped in a fantasy world far beyond what any songwriter could concoct. All they can do is observe, and report back to us.

Ward, accompanying herself on acoustic guitar because “getting together with six people in a studio isn’t really feasible,” reports to us with her new song:

Crying hearts in clouds of fog
Peaceful pleas that just go oh so wrong
They take in our emotions and shoot back bombs
But here we are
Oh, here we are

Here we are, indeed. It’s just the news. Ward wrote the song in one day.

“I’m home, so I’m working,” she says. “I have the news on, and it’s just frustrating to know that we’ve come to this division that we’re at. Whether or not you sit on the left or the right of politics, I think everybody can agree that we’re just divided. On top of that, for me at least, I love being out and being social. And you don’t get to talk about any of these things that are going on politically, with our president and with the division. And so that cathartic and social aspect is gone.”

Opportunities for musicians to have their voices heard in a big way have been hard to come by since the pandemic. Ward was a part of one effort last year, a weekend called the Rochester Livestream Music Festival. But her songs addressing what was unfolding had yet to arrive.

“I don’t have that release of either playing music to people, or sitting over a beer with somebody and just debating politics or debating, you know, the protests, or what’s going on in Washington,” she says.

“It was frustrating to me to just sit at home and have all of these feelings muster up as you’re watching the news and, whether it be that California was on fire, or the George Floyd issue that happened, and everywhere...”

And suddenly she was “splurting all that out, and bringing recognition to this is what I have been internalizing during this pandemic.”

Splurting. If it wasn’t a word, it is now. In a few verses, Ward had summarized this past year — actually, it’s been the past four years. And, “Here We Are.”

Fear he is our leader
But it used to be hope

The grim news had broken the writer’s block, in a way that Ward admits is new to her. 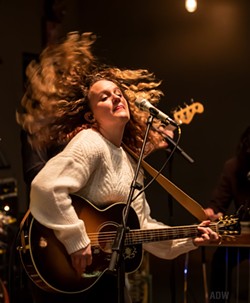 “I’ve always written about love or coming-of-age-type songs, I would say,” she says. “I also write about other people’s experiences really well. I’ve been able to take different people that are close to me, and they have a situation that’s going on that’s worthy of a song. I think I can write really well in kind of a third-person type view. But this, I’ve never written with any sort of political charge, or social charge like this.

“It kind of opened the floodgates for this other possibility I have. And I don’t like to make my music for just, for one certain type of person. So I kind of dance around. I think everybody knows what my politics are. But I kind of dance around being too forward with it. Because I do want it to be more of an enlightening way of addressing all of this, rather than: ‘You must think the way that I think.’ ”

Immediately after writing “Here We Are,” Ward wrote a second song, “Enemy Lines.”

“It’s about trying to feel empathy for everybody around you, no matter what their walk of life or political spectrum might be,” she says.

“I’ve got to tell you, from a personal standpoint, right before I wrote this tune, it got to the point where I was getting so crazy political, with everything I was thinking and speaking about.”

Once again, television had a hand in this. Ward says a Netflix documentary, “The Social Dilemma,” rewired her thinking about how social media has upended our social conversations.

“It opened my eyes enough to make me just take a little step back and be like, OK, listen, there’s people around me that I know that I love, that I know have been very kind and wonderful to me that I can’t …” she pauses, waiting for the right words. “I just need to not weight their politics as heavily as … it’s not a healthy thing for me to do.

“So I’ve been trying very hard to practice empathy and not rage when it comes to politics.”