On “Firefly,” Alexa Tarantino shows why she's a rising star 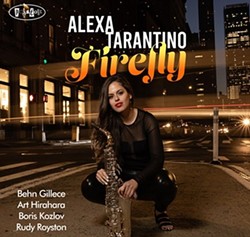 It’s been less than seven years since woodwind player Alexa Tarantino performed with Earth, Wind & Fire at the Rochester International Jazz Festival a month after graduating from Eastman School of Music. On her forthcoming CD, “Firefly” — to
be released on April 16 by Posi-Tone Records — Tarantino shows why she’s one of the fastest rising stars on the contemporary jazz scene.

Since moving to New York City she’s played with Wynton Marsalis and the Jazz at Lincoln Center Orchestra, vocalist Cécile McLorin Salvant, the DIVA Jazz Orchestra, and others, and recorded three albums as a leader. “Firefly” is a showcase for her own vision, gorgeous musical tone, and expertly shaped solos.

Tarantino also excels as a composer, contributing six of the record’s 12 tunes, including the album’s most experimental and challenging track, “Rootless Ruthlessness.” But she’s also generous in sharing the compositional spotlight. Her superb band includes Behn Gillece on vibraphone, keyboardist Art Hirahara, bassist Boris Kozlov, and Rudy Royston on percussion — each of whom contributes original tunes.

Ron Netsky is a contributing writer for CITY News.