Morgan Communities has sent over a press release with more details on this proposed project. The release follows the story.

A massive redevelopment project may be in the works for the vacant Rochester Psychiatric Center property, 1201 Elmwood Avenue in southeast Rochester. The 16-story Terrence Building, immediately recognizable on Elmwood, has been closed since 1995 and has been the target of vandalism as well as a popular site for urban explorers. 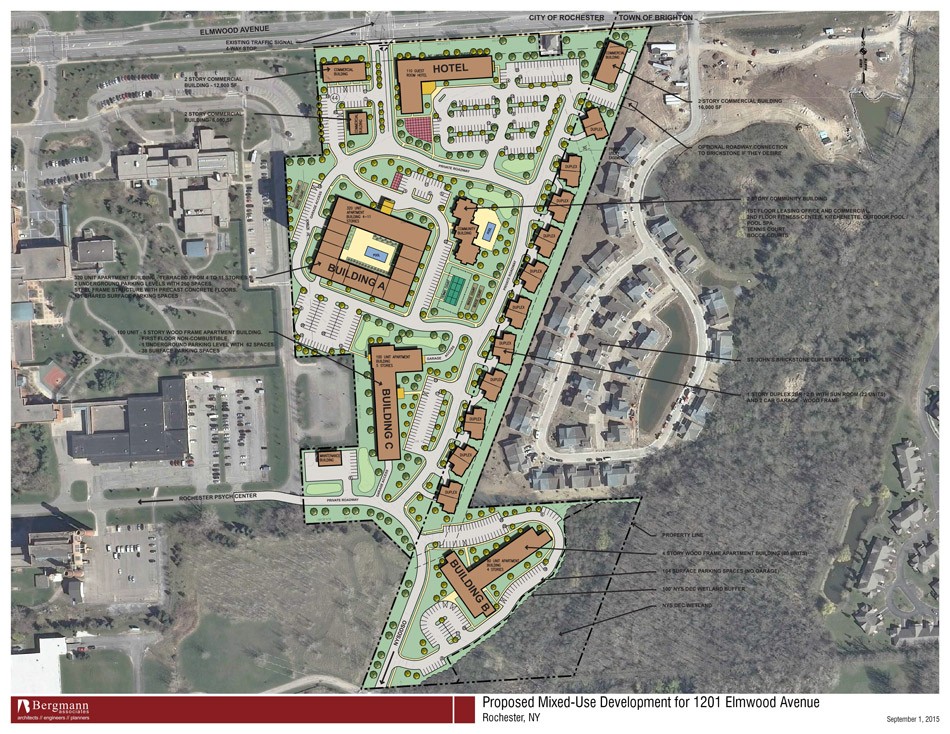 The Upper Mount Hope neighborhood group has informed residents of a December 3 public meeting on the potential project.

According to the neighborhood group, the limited liability company 293 A Alden Road wants to tear down the old Psychiatric Center to build a mixed-use development that would include more than 500 residential units, commercial space, recreation, hotel, and surface and enclosed parking.

The project would be built on approximately 18 acres in the City of Rochester and about 11 acres in the Town of Brighton.

Ramsey Boehner, Brighton's town planner, says that he's met with a representative for the project, but that there's no formal proposal before the town. He says that his meeting was with area developer Ralph DiTucci, and that Morgan Management may be involved in the project, too.

"For us, it's still in the very early stages of this thing," Boehner says. 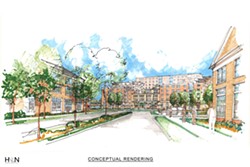 Dan Hurley, president of the Upper Mount Hope Neighborhood Association, says that he loves the idea of putting the property back on the tax rolls and potentially increasing property values in the area.

Boehner says that the building has a lot of asbestos in it, and that's inhibited redevelopment or demolition.

The meeting on the potential project is at 6:30 p.m. on Thursday, December 3, at the Brickstone by St. John's senior living community, 1325 Elmwood Avenue.

Partners Robert Morgan of Morgan Communities and Ralph DiTucci of the ARN Group LLC are in the planning stages for a new comprehensive neighborhood to be developed on the site of the former Rochester Psychiatric Hospital, also known as the Terrance Building.

Located between St. John’s Brickstone and the Rochester Psychiatric Center, the 17-story Terrence Building, which opened in 1959 as a state of the art “tower of hope,” closed in 1995, and has been a vacant attractive nuisance to its Rochester and Brighton neighbors since that time. During this 20 year vacancy, other developers have looked at the property in hopes of redeveloping it for alternative uses such as dormitory housing.

“This landmark property has some environmental challenges, but its location is ideal for a new community that can be a walkable neighborhood, with a variety of housing choices that can accommodate the lifestyles of people of all ages and from all walks of life. This new neighborhood is designed to bridge the divide between the fresh residential style of Brickstone and the more urban- institutional character of the Rochester Psych Center, while respecting the existing single family homes and apartments in the surrounding City and Brighton neighborhoods” said Ralph DiTucci.

“Since the Terrence Building was shuttered two decades ago, it has been a blighted site and nuisance for those traveling, living and working in the area,” DiTucci added. “What Bob and I envision is a new community that not only blends in with its diverse neighbors, but which also creates an interface with them by providing neighborhood oriented commercial and retail uses, as well as green space, and walking and biking paths including the long awaited Highland Park-Canal Way Trail along Brickstone’s western edge.”

With some residences targeted to be available in the first quarter of 2017 and continuing on into 2018, the yet-to-be-named community will feature a variety of apartment homes ranging from high-end luxury to attached ranch homes and moderately priced units, as well as a hotel, and neighborhood oriented commercial uses. Its prime location is within walking distance of the University of Rochester, CollegeTown, Strong Memorial Hospital, Highland Park and the Al Sigl Center, among other community landmarks.

“We commissioned a very comprehensive market study to ensure that what we are providing will be what is needed and appropriate for the community at large. In order to appeal to the broadest demographic, we are considering every detail from lifestyles to interior finishes and to conveniences that will make people and business owners want to live, work and play here”, said DiTucci.

The 17-story Terrance tower will be replaced by the project’s gateway building, which will rise to the south from 5 stories to 12 stories, creating rooftop terraces and balconies for many of its 320 apartment homes clustered around a central courtyard with swimming pool and serviced by two levels of parking garage below. This building will provide panoramic views of Rochester and the Town of Brighton.

Additional elements of initial plans for the 28-acre community include a blending of the following:

“I’m very excited and proud to partner with Ralph and drive the revitalization of this property,” said Bob Morgan. “Growing Rochester and keeping it strong is very important to me, and projects like this allow my team and my family to ensure that other folks in Rochester have the opportunity to keep their roots planted here.”