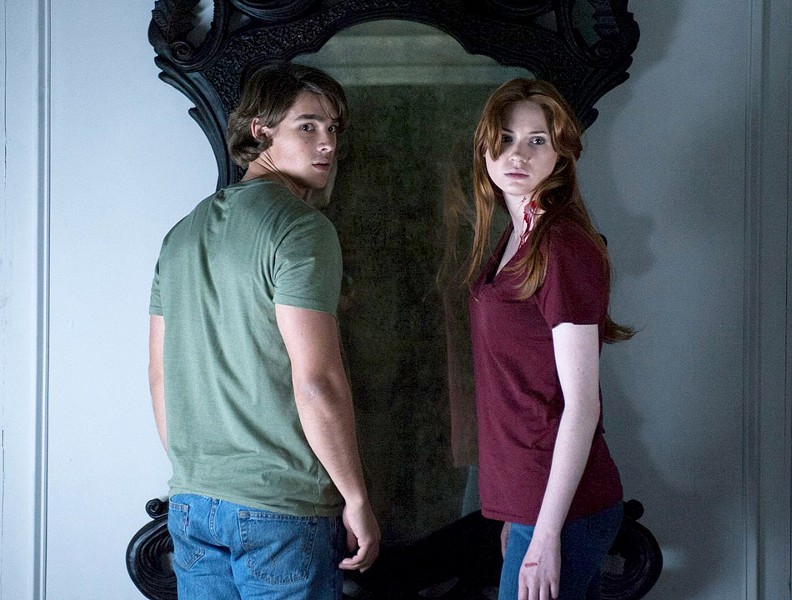 Also striking a compelling balance between psychological drama and traditional horror film, "Oculus" tells the story of a brother and sister haunted by the violent deaths of their parents, which they witnessed as children. The film opens as Tim (Brenton Thwaites) reunites with his sister, Kaylie (Karen Gillan), following his release from the mental hospital where he's been since the night their parents died. Immediately, she tries to convince a reluctant Tim to return to their childhood home, where she hopes to prove what really happened all those years ago. She intends to clear their parents' names by proving that their deaths were in fact caused by a malevolent antique mirror that she believes possesses the ability to manipulate the minds of its victims, forcing them to hurt themselves and anyone unfortunate enough to be around them. Her elaborate set-up includes cameras to document the events that unfold, regular check-ins from her fiancé, alarms to remind them to eat and drink, and most importantly, a fail-safe that will smash the mirror unless a timer is manually reset.

Once inside the house, director Mike Flanagan gets creative with the film's construction, cutting back and forth between the two timelines, as we see the incidents from their childhood contrasted with what's unfolding currently. As Tim and Kaylie argue over their memories of how things developed, the film suggests that the mirror may simply be Kaylie's method for dealing with her trauma. Of course, this being a horror film, it's no real surprise when it turns out that's not the case, but the idea adds an intriguing subtext to the scares.

Kaylie and Tim are played as young children by Annalise Basso and Garrett Ryan, who do a fantastic job at portraying the horror of watching their parents slowly lose their minds and being unable to do anything about it. Flanagan wrings every bit of drama and terror from the children finding that the two people who are supposed to protect them from anything are suddenly a very real danger.

The inventive structure does end up being a bit of a hindrance as the line between what's real, what's a memory, and what's fabricated within the character's minds by the mirror grows increasingly fuzzy. When every development holds the possibility of being undone the next minute, it's hard to get truly shaken when horrific things occur, causing the story to lose some of its urgency. Even if "Oculus" never becomes truly terrifying, the film maintains a pervasive sense of dread, and it's clever and entertaining enough that I didn't even mind an ending that makes sure to leave the door open for the inevitable sequel.