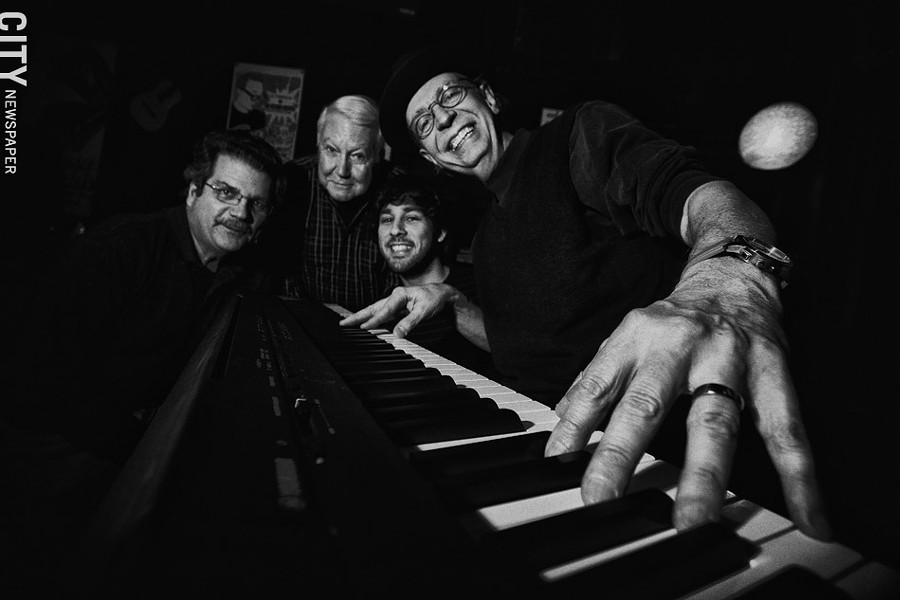 PHOTO BY FRANK DE BLASE With The Occasional Saints, pianist Paul Nunes is reaching into the Deep South for jazz and pop.

Paul Nunes' hands dance effortlessly up and down the 88's in a powerful polydactyl boogie. It's a sound of big ease, of Louisiana bump and sparkle with dashes of jazz and pop mirth. It's beautiful; it's sanctified. But a saint, he ain't. Nunes has finally hit the scene with his new outfit The Occasional Saints, a band he's dreamed of creating for years. The time was right; he just had to purge his soul and prepare for the judgment.

"I love New Orleans piano," he says. "The style and groove really talks to me. I've been thinking of this band 8 to 10 years... thinking about it. It was a big jump to actually do it."

Nunes wasn't necessarily a reluctant saint; other priorities had to be addressed. Family obligations, jobligations, health issues including his own cancer scare, one daughter moving to England, the other launching a music career. The man was spread thin. He couldn't pull the trigger.

"Other life forces began to move," says Nunes. "There were these other priorities, and I didn't have the bandwidth to do it."

It was a few years later that Nunes stumbled upon a virtually abandoned old Steinway at Java's at the Public Market. It was barely in tune and as Nunes puts it, "beat up and left for dead." Nunes took pity and since it wasn't going to play itself, started banging away at it. He did this every Saturday morning for a spell, and folks started to congregate. Other musicians gradually started coming out of the woodwork to sit in. The Public Market Band was born, but Nunes still couldn't commit to the time required.

Flash forward: today. His kids are squared away – one is married, the other is ukulele sensation Julia Nunes – his wife is on the mend, and he has more time to commit to his music. Besides The Occasional Saints, Nunes is also the children's entertainer Vincent. But for the big kids, he's written over 30 songs full of swampy boogie and lackadaisical charm and has secured a solid line-up, too.

The Occasional Saints isn't the impish, cloven-hoofed line-up you'd expect. Guitarist Carmen Verzillo, drummer Michael Verzillo, and bassist Ernie Santoro surround Nunes as they all collectively serve the song. There's no brassy fanfare or histrionics, just appropriate, spot-on renderings as required. They don't show off. At the center is Nunes, as he nurses a narrative full of New Orleans nectar from the piano like a less sardonic Randy Newman or Tom Waits on a chocolate milk bender. He sings matter-of-factly and prefers to showcase the band than to be considered the front man. He lets the songs speak for themselves. And though they possess their own individual tales, there is a common thread throughout.

"A good time," he says. "I want to bring something positive to the party. I try not to write dark songs. There are many gifted songwriters and performers who can go to the dark edges. I choose not to. Other folks can cover that territory; it's just not me."

Anywhere is perfect for a song to strike, according to Nunes. At the piano, driving, walking, or in something he calls lucid dreaming.

"There's kind of this twilight when you're waking up," he says. "Somewhere between dreaming and waking up – where you're conscious enough to control what's in your mind. I find I can write songs in that space. But then you have to write it down. There are times I've gotten up, buck naked, in my kitchen at the counter writing down the lyrics. Before they go, I've gotta write them down – before, like the bats of night meeting the sun at dawn, they flutter and fly away."

With the line-up solidified and hitting on all eight, Nunes plans on opening the doors up to canonize more Occasional Saints by showcasing guest musicians each show. The band is in the studio now with a completed EP in its sights, and Nunes continues to write naked in his kitchen. If you stop by, you'd better knock first.