Nurse shortage at RGH leads to a union drive

PHOTO BY MAX SCHULTE Jenny Gough, an RN who works on the sixth floor of the of the news Sands Family wing at RGH, is also on the nurse union board that's working to negotiate with Rochester's second largest hospital system on a contract for nursing staff.
Jenny Gough, a nurse in the oncology unit at Rochester General Hospital, remembers being excited to go to work before the pandemic.

Now, amid flagging morale, staffing shortages, and the erosion of what she called “institutional knowledge,” scarcely a day goes by that she doesn’t consider walking away.

Gough is among a legion of nurses at Rochester General Hospital fighting to form a union, under a banner of the Rochester Union of Nurses and Allied Professionals (RUNAP). Their concerns were punctuated during the height of the pandemic, when the hospital, much like many others across the nation, began hemorrhaging longtime staff.

The staffing losses then were supplemented by travel nurses. That trend has continued and, the nurses say, has created a scenario in which the attention of full-time nurses is perpetually diverted to training a revolving door of newcomers on the fly, which leaves them feeling unable to provide the care that patients deserve.

Gillian Kingsley, a nurse in the labor and delivery unit at RGH, sees little hope in the situation, and often feels like her livelihood is on the line. A nurse can lose their license to practice in situations of negligence, which Kingsley believed can occur among overworked and unprepared staff.

“It’s like feeling there’s not a light at the end of the tunnel, when it’s going to get better,” she said. “That’s when people say, ‘I don’t want to do this anymore, I’m risking my license every day I’m here, and I’m not even risking it to give good care.’”

While the problems with staffing at RGH began during the pandemic, they have persisted.

As part of the unionization effort, RUNAP issued a series of questions to hospital administration about a variety of matters, including staffing vacancies. The hospital’s response, which was provided to CITY, suggests that as many as half to three-quarters of full-time positions in critical care areas have been unfilled by permanent employees since last spring .

For example, the average vacancy rate in the emergency department was 60 percent. In the medical surge unit, 74 percent of positions were open. In the operating room, 54 percent of the jobs were unfilled.

The vacancies have been filled by travel nurses, at least temporarily. 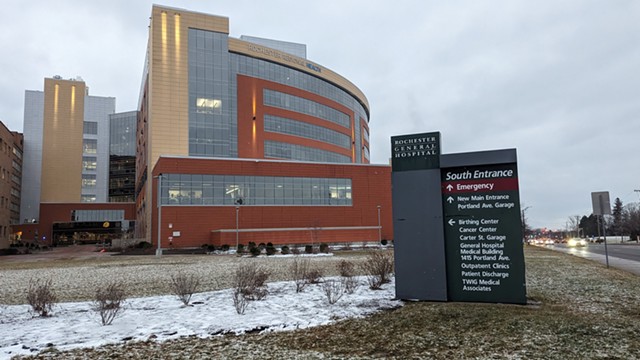 In response to questions about the vacancy rates, RGH issued a statement that its staffing situation is not unique, and that every hospital in New York is dealing with staffing difficulties.

“Like nearly every hospital around the country, we are supplementing our staffing levels
with travel or agency nurses as a stop-gap solution to our staffing challenges,” the statement read. “Our hope is that through the combination of our recruitment and retention efforts we will be able to decrease our reliance on agency nurses and return to agency rates similar to those we had before the pandemic.”

The hospital stated that when travel nurses are factored into the mix, the vacancy rate hovers around 20 percent, slightly higher than the state average of 18 percent.
A multilayered issue

For rank-and-file nurses, though, the issue is more nuanced than just the numbers.

They say when the hospital shed nurses, it lost experience that nurses who were newer to the field could not replace. Some of those nurses would stay, some would head off to practice travel nursing after a short amount of time. Travel nursing tends to pay better than permanent positions, with the nurses estimating many of the travel nurses make upwards of three-times their wage.

According to the Bureau of Labor Statistics, the average registered nurse in Rochester made a median hourly wage of $36.27 an hour in 2021, the most recently available data. Meanwhile, in March, the American Hospital Association stated the median per hour rate hospitals pay fortravel nurses reached $148.20 in 2022. Travel nurses take home only a fraction of those payments. In New York, travel nurses are paid a median wage of about $40 an hour.

Kingsley said the loss of experience is incalculable. She said her labor and delivery unit lost 26 nurses during the pandemic, a situation that often leads to her, with a decade of experience, being assigned as the nurse in charge — a duty that pays $2 more an hour.

“When I have to be the charge (overseeing) nurse, and then also be the baby nurse who is responsible for the well-being of this baby who is learning how to breathe for the first time, and I also have to support all of the brand new nurses on my floor, and simultaneously keep an eye on my triage nurse and hope they have the gut instinct to know when to call for help,” Kingsley said. “All for $2 an hour, and I’m legally responsible for everything.”

Shannon Bassett has been a nurse in the emergency department for eight years, but also supplements her income as a travel nurse.

Bassett said the influx of patients has resulted in some being treated in chairs set up in the department’s hallway. That problem, Bassett said, has been exacerbated by nursing shortages in other areas of the hospital. Patients who would otherwise be treated elsewhere in the facility are being sent to the emergency department, she said.

As part of RUNAP’s fight for a contract with the hospital, members of the fledgling union began a letter writing campaign to hospital administration. The letters, in the hundreds, paint a bleak portrait of life as a nurse.

“I’d rather catch C-Diff than 9-10 patients on a shift in inpatient psychiatry,” one letter read.

“Short staffing lead(s) to unqualified travelers being hired, and patients dying,” read another.

“Imagine working in a hospital and needing to go to the emergency department and going to a different hospital, because you see how overburdened the staff are here and know you and your family wouldn’t receive good care,” yet another read. “That’s our reality here.”

Rochester General Hospital is not alone in its struggle to retain staff.

In March of last year, the American Hospital Association wrote to the House Energy and Commerce Committee underscoring the staffing shortages at hospitals nationwide. The letter specifically noted the reliance on travel nursing agencies, and that the costs of those services tripled between 2019 and 2022.

“Hospitals were already spending more money on contract labor even before the latest COVID-19 surge,” the letter read. “According to a Definitive Healthcare study, contract labor expenses for hospitals have more than doubled over the last decade. However, the prices charged by contract labor firms during the pandemic have become exorbitant as supply is scarce and demand is at an all-time high.”

Rochester General Hospital said in its statement that it was putting in place several initiatives to attract nurses, including expanding regional recruitment efforts, launching a strategy to hire international nurses, and offering a $10,000 bonus to nurses who refer nurses who are then hired by the hospital.

In January, Strong Memorial Hospital, part of the University of Rochester Medical Center (URMC), reported a nursing vacancy rate of 20 percent, similar to the rate at RGH.

To quell the shortage, URMC’s School of Nursing recently announced a plan to train up to 33 nurses a year without charging tuition.

The dean of the school, Lisa Kitko, described the move as necessary to reverse a staffing crisis that was not anticipated to hit for another 10 years.

“Right now we are in a crisis, and we will be in a crisis for a bit longer,” Kitko said. “As we've been watching the data, we knew (by) 2030 we were going to have a big exodus out of the workforce, as the baby boomers look to retire. Then COVID hit.”

“If we think of nursing as a pipeline, and we were projecting kind of leaking at that end part of the pipeline, we knew that was coming,” she continued. “As we look at our pipeline, right now, it's really leaking at all areas.”