Art imitates life, and perhaps no art form as much so as theater. The upcoming 2019-20 season will spotlight issues constantly in the headlines today, from race and gender to politics and terrorism. Through modern retellings, classic revivals, and brand new blockbusters, local stages will offer food for thought on a variety of hard-hitting topics.

Wallbyrd Theatre Co., helmed by 30-something Pittsford native Virginia Monte and based out of a second-floor black box space in Village Gate, continues to hold its own against bigger companies in town. This year's opening show (one of three total in their season), "Medea," is a new adaptation of the Euripides classic and runs October 17 to 27. The plot follows a modern-day Medea, who becomes a single mother of two when her husband leaves her for another woman. (Check wallbyrd.com for ticket information)

Longtime arts educator and director Judith Ranaletta and OFC Creations executive director Eric Vaughn Johnson recently began collaborating on interactive theater productions held in the Century Club of Rochester. Scenes happen within rooms of the venue, and cast size is much smaller (usually less than 10 people) to make for an immersive, intimate experience. Two more are planned for this season: "Nunsense," which runs November 1 to 3; and "The King and I," which runs March 4 to 8. Tickets start at $35, are limited, and sell out quickly. (ofccreations.com)

In keeping with his commitment to new works, JCC CenterStage artistic director Ralph Meranto has included a world premiere, "Division Street," in this year's season. The comedy-drama, onstage November 2 to 17, is penned by Jason Odell Williams, who also wrote "Church & State" (the play premiered at CenterStage in 2016 and ran off-Broadway in 2017). "Division Street" features a three-person cast and centers on an interracial celebrity marriage in Hollywood. General admission tickets are $33. (jccrochester.org/centerstage) 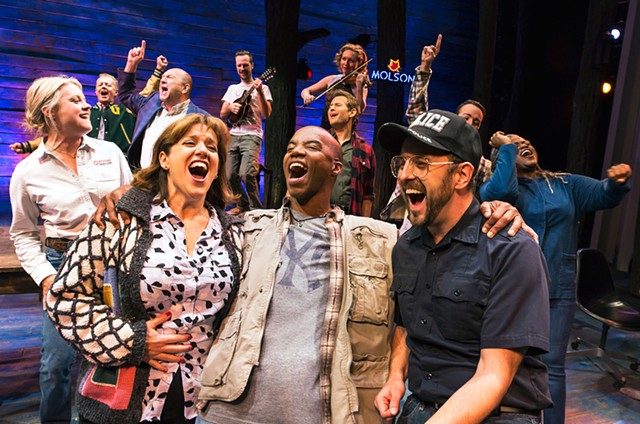 Rochester Broadway Theatre League returns with a lineup featuring several popular Broadway runs, and "Come From Away" is one of the first few on the docket. The musical runs November 19 to 24 and tells the true story of 7,000 passengers who were stranded in a small town in Newfoundland after 9/11. The award-winning show just reached 1,000 performances on Broadway and continues to sell out, so having the chance to see it locally is worth taking. (Visit rbtl.org to reserve tickets)

For those who revel in non-traditional — but still heartwarming — holiday shows, Blackfriars Theatre will present "Peter and the Starcatcher" December 13 to 29. This nine-time Tony Award-winning, family-friendly musical tells the story of the shipwreck of the H.M.S. Neverland and a young crew led by an orphan boy who must fight off pirates (sound familiar?). While it's inspired by "Peter Pan," this fantasy holds a few different twists within its trademark three-dimensional staging. Individual tickets start at $28.50. (blackfriars.org)

Out of Pocket Productions presents the classic 1938 American play "Morning's at Seven" January 31 to February 8 at MuCCC. The plot follows the aging Gibbs sisters, who have lived near each other in the same Midwestern town for decades. When one of the family members considers flying the nest, the sisterhood is tested. This lesser-known comedy has had two successful Broadway revivals, and has not been performed in the area often. (Check back at outofpocketinc.com and muccc.org for ticket information)

Just in time for St. Patrick's Day, Geva Theatre Center will mount "Once," the stage adaptation of the 2007 film, from February 19 through March 22. Featuring a soundtrack by Irish rocker Glen Hansard (The Frames, The Swell Season) and Czech singer-songwriter Markéta Irglová, "Once" is designed for the lead actors to play their own instruments live as well. The Dublin-based love story won the 2012 Tony Award for best musical and is about an Irish busking vacuum cleaner repairman who falls in love with a Czech single mother. Single tickets start at $25. (gevatheatre.org)

Running nearly parallel to one another near the end of the season are two important works about gender opportunity and female empowerment. "Silent Sky" by Lauren Gunderson runs at Blackfriars Theatre March 27 through April 11, and focuses on an aspiring female astronomer working at Harvard Observatory in the early 1900s (Individual tickets are $28.50; blackfriars.org). And "Looks Like Pretty" by Elyzabeth Gregory Wilder runs at Geva Theatre March 31 through April 26. The co-commissioned premiere (The Ensemble Studio Theatre in New York City is working with Geva) is about Kodak, circa 1963, and questions raised about color editing by new, young African American employee Gloria (Single tickets start at $25, gevatheatre.org). Both shows feature female playwrights and directors.