LIBRARY OF CONGRESS Smoke billowing over Tulsa, Oklahoma, during the 1921 massacre.
The Greenwood District, a thriving business community in Tulsa, Oklahoma, built by Black Americans, was known as Black Wall Street.

But the success story became a horror story when mobs of white residents attacked the district and killed many of its workers and inhabitants. The terror, which spanned two days in 1921, was captured years later by Rochester playwright Debra Washington.

“Come on AJ, you know as well as I do white folks ain’t happy with what they see going on in Greenwood. A lot of them white folk come back from the war and they poor, and when they look over that white-picket fence into our community, realizing we got something better than them, realizing a community is flourishing, they ain’t coming to congratulate us.”

That exchange is between businessman J.B. Stratford, who built the largest hotel in town, talking to A.J. Smitherman, the publisher of Greenwood’s Black-owned newspaper in Washington's play, “Emancipation Denied: The Story of Black Wall Street."

The Rochester theater group, the North Star Players, first presented “Emancipation Denied” in 2017 at Rochester’s Multi-use Community Cultural Center (MuCCC). And then at East High School where, as David Shakes, who heads the theater company, recalls, “It was so quiet, you could hear a pin drop.”

Now MuCCC will offer a free, online version from Monday through Wednesday. It’s the 100th anniversary of what’s generally called the Tulsa Massacre, perhaps the most shocking racial conflict in the country’s history, although we have a lot to choose from.

Greenwood was part of a movement by Black people to create a home in a country where they often were not welcome. There was talk of Black businesses supporting each other in segregated communities. Perhaps, even, an all-Black state.

As one of the characters in the play says, “Blacks from the South were tired of being disenfranchised, intimidated, segregated. Lynched by whites who thought they were superior. And it sure feels good to have something to call our own.”

Shakes had initially wanted the North Star Players to put on another full version of “Emancipation Denied” this year. But in the midst of the coronavirus pandemic, Shakes opted to record a video of a reading at Empire State College, so that the North Star Players would be sure to have something to present on the anniversary. The actors all wore black. And face masks, until it was their turn to read.

The characters of Stratford and Smitherman were real people, caught up in a race riot. In “Emancipation Denied,” Washington presents a straightforward account of the times leading up to the Greenwood attack. The lynching of a Black farmer. The laws in Tulsa that restricted the voting rights of Black people. Sundown towns, where Black people were intimidated into leaving white communities by sunset.

“Over 60 percent of the Black population,” Washington says as the play’s narrator, “served whites as cooks or domestic workers, boot blacks or laborers.” 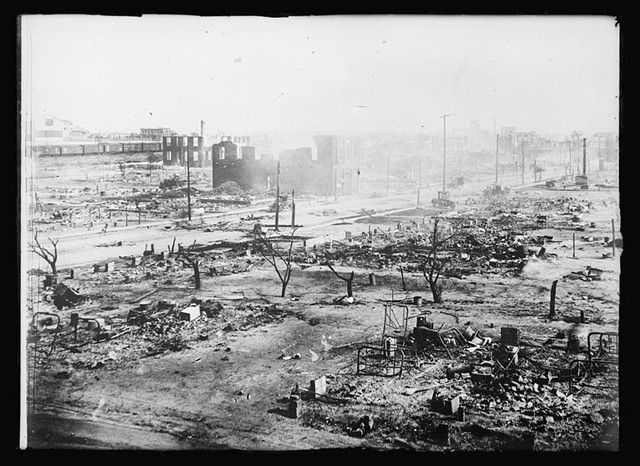 The Tulsa Massacre was a coordinated effort, sanctioned by the law. White men were deputized by the police after an angry confrontation over the arrest of a Black teenager accused of sexually assaulting a white girl. Private airplanes soared over Greenwood, their pilots firing rifles and tossing firebombs onto the rooftops of Black Wall Street.

Washington, and the characters in the play, bear witness to what happened.

“They attempted to escape, but to no avail. They were killed in large numbers as they tried to flee to safety . . .”

“They’re lining the people up, my God, with their hands raised above their heads, slowly herding them out of Greenwood, like cattle . . . ”

“In less than 24 hours,” Washington says, “a Black promised land had been turned into a smoldering wasteland by a white mob.”

More than 35 square blocks of Greenwood were destroyed, 10,000 people left homeless. Estimates of the number of dead range from 75 to 300. At least 800 more were hospitalized. History still hasn’t uncovered the complete truth. Last year, a mass grave was found, suspected of containing the bodies of some of the victims.

What details are known are being trotted out for public display now, due to our mania for anniversaries. But why had the Tulsa Massacre remained such a little-known chapter in American history?

“A vast cover-up,” Shakes says. “Even the graves, the cemeteries were obscured, so there was no recognition of that, even though it seems unbelievable.”

According to some historians, nearly a dozen such riots happened in Oklahoma alone around the turn of the last century. Is there reason to excavate these crimes, and relive them through the media?

“We’ve learned from suffering from pain,” Shakes says. “We have to remember these things, and recognize them, and make efforts to see that they do not happen again.”

Jeff Spevak is the arts and life editor at WXXI, a media partner of CITY. He can be reached at jspevak@wxxi.org.