North Star Players' David Shakes and the bite of change

David Shakes knows what change looks like, and sounds like, and feels like. He finds it in writers such as James Baldwin, whose words have shadowed us as the country navigates the summer of Black Lives Matter.

Shakes is finding change in the words of Frederick Douglass, and in the narratives of slaves. And in “Emancipation Denied,” a play written by a Rochester woman and brought to the stage four years ago by Shakes’ North Star Players.

Shakes was a friend of Baldwin. That was back in the 1960s, a time when Shakes says “we were ahead of the curve.” There was movement. The civil rights movement. And the Black Arts Movement, where Shakes moved among giants such as Baldwin and the poet Amiri Baraka.

But we didn’t see what was around that curve. With all of the starts and stops of social progress, it has not been a smooth ride. “Emancipation Denied” is the story of the 1921 Tulsa Massacre, a race riot that has been curiously overlooked by the history books. Although, in this summer of the nation’s self examination of its race issues, set off by the murder of George Floyd, Baldwin and the Tulsa Massacre have been increasingly present and accounted for.

Shakes loves history. And he knows that history, as is the case with the Tulsa Massacre, does not play fair.

“Once again it reaffirms the lack of a true representation of the history of our nation,” Shakes says. “Of historic events, that we should look at, and try to learn from, and try to raise the moral bar of where we are.”

And then his arts heart turns to music; his wife Gaya, is a beautiful singer. “I also harken back to a Louis Armstrong song, ‘What a Wonderful World,’” Shakes says. “It’s not the world, it’s what we’re doing to it. And the things we do to each other hit home very much.”

Born in Philadelphia, Shakes grew up in Rochester, and has lived here most of his life. As a young man out of Ithaca College, he moved to New York City and got involved in the Civil Rights Movement. And the Black Arts Movement, politically motivated Black artists, dramatists, musicians and writers.

A flesh-eating bacteria gained a foothold on one of his legs. Like something from a horror movie, he admits. Shakes waited a while before seeking treatment, and is slowly on the mend now. But he says one of his doctors told him, “if you waited one more day, that might have been all she wrote.”

Shakes has filled this professional and personal vacuum by reading. He and the North Star Players are discussing ideas for the troupe’s return to the stage. “Emancipation Denied” will be a part of that, likely next year. On the 100th anniversary of the Tulsa Massacre.

“We hide so many of the things that are there, because of the narrative that wants to be written, and that predominates the schools, predominating the nation.”

It’s the phrase that has been heard so often this summer: systemic racism. It’s propelled by those who wield power, enhanced by those who ignore it, and it permeates our education systems.

“When one is kept ignorant, when one lacks the power, the knowledge being kept away and shaped, so it therefor shapes the history,” Shakes says. “History is shaped by those who have the power and make the definition so they can leave out whole segments of it.” 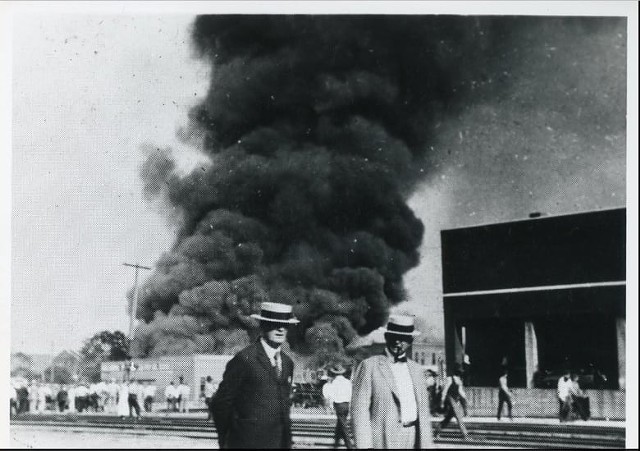 So here are the facts: Greenwood was a Black neighborhood within Tulsa, and grew to be so prosperous and successful, its streets lined with businesses, newspaper offices, churches and nightclubs, that it was called “the Negro Wall Street.” For two days, starting on May 31, 1921, Greenwood was set aflame by roving white mobs, with evidence that Tulsa city officials were the provocateurs. It’s estimated that as many as 300 Black residents of Greenwood died in the riots, which included people tossing bombs from airplanes.

“It was a reaffirmation of entrenched racism in this country, systemically, as well as just a whole feeling of a people to crush the aspirations of another part of our nation,” Shakes says. “We bombed our own people as Americans, if you look at it nationwide.”

The riot was supposedly triggered by a Black teenager’s encounter with a white woman in an elevator; the details are uncertain, ranging from an accidental bump to an assault. In his research, Shakes says he cannot find evidence that it even happened. It was perhaps a lie, to justify the attack.

“So that is story that, a story and a theme that’s been carried on in this country to perpetrate violence, to kill people, particularly African-American men,” Shakes says. “It was a theme that runs through, still runs, through today. So it helps us to look through some of the ills of our nation and to, hopefully, we try to learn something from it and move past. And raise that moral bar, and truthfully look at ourselves as a nation, and the values. And hopefully strive toward some truth and equity in the nation.”

A documentary on Baldwin, “I Am Not Your Negro,” was recently a virtual showing at The Little Theatre, and it can be found now on cable. Baldwin died in 1987, but his word still educates us where other sources fail.

“When one is kept ignorant, when one lacks the power, the knowledge being kept away and shaped, so it therefore shapes the history,” Shakes says. “History is shaped by those who have the power and make the definition so they can leave out whole segments if it.”

We’ve been here before. The call to ban automatic weapons after 26 people, including 20 kids five- and six-years-old, were murdered at Sandy Hook Elementary School. Or when the television news brings into your living room a video of a police officer shooting an unarmed Black man. There is rage, and call for change, that soon fades.

This summer, after the murder of George Floyd – and factor in the coronavirus pandemic as a part of this summer of distress – it feels like this call to social change has legs.

And vote in the Nov. 3 election to, as he says, “Put some teeth in that bite of change.”