The Rochester Police Department documented 179 heroin-related incidents last October – either sales or use – in just one location in the North Clinton area near St. Michael's Church. 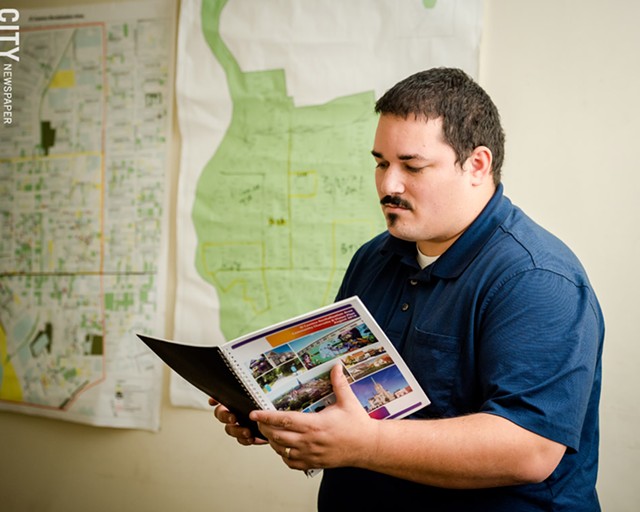 So much heroin moved along one stretch of North Clinton Avenue near Clifford Avenue that that section of the map looks like a pinkish dab of watercolors.

The RPD's research is part of an ambitious effort by the Ibero-American Development Corporation to crush the open-air heroin market that has plagued the North Clinton area for decades. IADC has partnered with the RPD and Rochester Institute of Technology's Center for Public Safety Initiatives to launch CLEAN: the Community Law Enforcement and Assistance Network Target Area effort. The three-year program, which is being funded by the Department of Justice, focuses on a roughly 30-street area of the city.

CLEAN is still in the planning phase, says Miguel Meléndez, special projects director for IADC. But it will involve several tactics, such as having stronger police presence in the hot spots, connecting addicts to health and recovery services, and removing trees, bushes, and hiding areas where drug activity currently can take place undetected.

"The people in this neighborhood, they sympathize with the addicts," Meléndez says, "but they also feel victimized seeing people in their backyards or picking up 300 needles in the vacant lot next door."

Most of the drug buyers are coming from outside the area, he says. And although some of the drug sellers live in the North Clinton area, most come in from all over county – as if they're commuting to work, he says.

Law enforcement officers sent a letter to the owners of vehicles spotted in the North Clinton Avenue and Conkey Avenue area in a prior crackdown, informing them that their vehicles were seen in a known drug trafficking area, Meléndez says. That tactic may be used again, he says, because residents believe it had an impact.

IADC is coupling the CLEAN program with a plan for a $28 million affordable-housing project. The 90-unit project, called Pueblo Nuevo, is not a single construction site. The plan is designed instead to fill in many of the vacant lots that remained after the city demolished numerous homes in the area.

"We believe that part of the drug market's long history has to do with the vacancies," Meléndez says. And a different dynamic is needed to improve the area other than relying solely on law enforcement, he says. Increasing the number of engaged residents will help revitalize streets and shed the area of the neglected and abandoned appearance it has in some places.

"We don't want this neighborhood to look the part of a place where drugs are sold," he says.