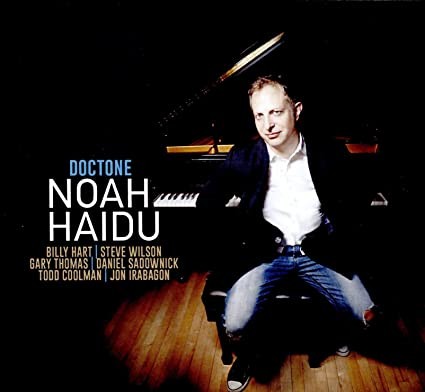 Noah Haidu is one of the younger generation of pianists fascinated with the work of Kenny Kirkland. On his new album, “Doctone,” Haidu and his band explore nine of Kirkland’s compositions (one of them twice), and one by Haidu — an homage titled “Doctor Of Tone.”

Although his career lasted only two decades, Kirkland was widely considered one of the greatest and most influential jazz pianists of the late-20th century. He only recorded one album as a leader, but he enhanced the bands and recordings of Wynton Marsalis, Branford Marsalis, and many others before his untimely death of congestive heart failure in 1998, at the age of 43. His most visible role was in the band of Sting, bringing a jazz sensibility to the pop star’s music. Kirkland’s stint with Sting was documented in the film “Bring On The Night.”


Haidu is himself an excellent pianist who has played with Mike Stern, Benny Golson, Eddie Henderson, and others. On “Doctone,” he’s joined by Billy Hart on drums and Todd Coolman on bass — and on various cuts, saxophonists Steve Wilson, Gary Thomas and Jon Irabagon, and percussionist Dan Sadownick.

All of Kirkland’s compositions reveal greater richness with repeated listens. Tunes such as “Steepian Faith,” with its unexpected angles and complex harmonies, support Haidu’s liner-notes assertion that Kirkland was a brilliant composer. Haidu’s group interprets the song masterfully, with the help of Wilson’s serpentine saxophone solo. “Chambers Of Tain,” which Kirkland wrote for his longtime bandmate, drummer Jeff "Tain” Watts, is highlighted here by a solo from Hart, who also played with Kirkland.

The album is just one component of Haidu’s extensive exploration of Kirkland’s work. He has also produced a book and documentary film about Kirkland, featuring interviews with Coolman, Hart, Watts, Wilson, Sting, Jason Moran, Delfeayo Marsalis, Rodney Jones, and others who worked with the pianist.