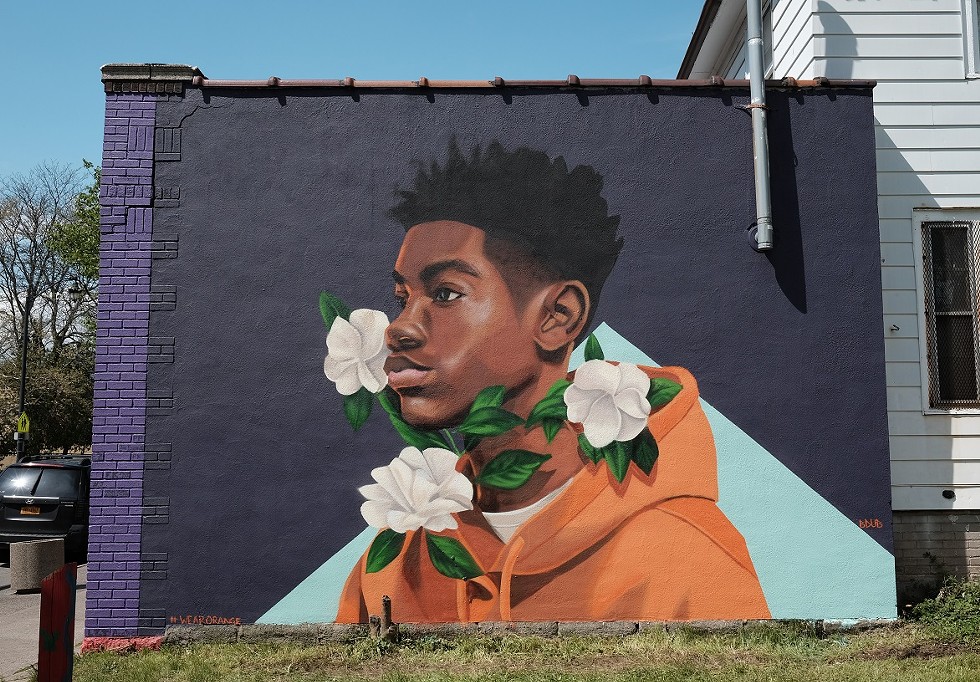 July is wrapping up, and for the only the second time eight years, Wall\Therapy is not putting on its annual summer mural festival. But the group’s organizers are still working to link W\T artists with opportunities to paint new murals around Rochester. In May Wall\Therapy alum Brittany Williams painted a mural on the side of Rocky’s Pizza at 810 Genesee Street. And Williams, Sarah Rutherford and Justin Suarez (aka Mr. Prvrt) — both of whom are Wall\Therapy alums — are currently painting the portraits of three local musicians on an interior wall at Martin Luther King Jr Park at Manhattan Square. They’ll be present and painting during this Thursday night’s Party in the Park event headlined by renowned band WAR.

Since its founding in 2011, Wall\Therapy has organized 132 murals by artists from dozens of countries and has hosted annual summer festivals as well as other special events throughout the year. Arguably, its most ambitious year was 2013, when it produced dozens of murals by 34 local, national, and international artists.

Each year the curators and volunteers have conducted crowd-funding campaigns, raising tens of thousands of dollars from enthusiastic community members. It’s a huge undertaking, and the team decided to shift its focus this year to smaller, more specialized projects. Earlier this year, organizers determined that fundraising for this year was looking tough, says Wall\Therapy lead curator Erich Lehman. And many of the main organizers are busy with finishing up degrees or other life matters.
“It just made sense — instead of trying to do the crazy hustle to raise a bunch of money and hit the targets for the normal July event — to maintain the course doing our writing, give everyone time to work on what they’re working on, and keep building,” Lehman says.

And at the same time organizers were trying to figure out what would be feasible for this year, they were approached by different community groups and local institutions with funding sources and ideas.

“We had these new opportunities to work with community groups more directly,” Lehman says. “So we took it as a sign from the Fates: Okay let’s take this year and focus on working on more direct projects with community groups locally, and have more specific impact. This year we’re going to talk about issues with the community that impact specifically groups in the city.”

Brittany Williams’ mural at Rocky’s Pizza, “Through Tragedy, There's Hope,” is a portrait of a young man in an orange hoodie with white flowers framing his face, his features a result of her imagination. The piece was a collaboration between Wall\Therapy and the local chapter of Moms Demand Action, a national grassroots organization that pushes for public safety measures to protect people from gun violence.

Activist Jeremy Tjhung reached out to Wall\Therapy with the idea for the mural, which Lehman says has received positive attention nationally (Moms Demand Action is sponsored by Everytown For Gun Safety, which is largely financed by founder Michael Bloomberg).

Lehman thought Williams’ work — which involves lovingly rendered, joyful portraits of young people of color — would be a great match for the project, and he later found out she grew up close to the neighborhood where the selected wall was located.

Williams says she was given a lot of freedom to create the mural, and that the group just wanted something that “reflects the parents, sisters, brothers, friends who have lost a family member to gun violence. I wanted to make it something positive, because oftentimes all we see of ourselves is a memorial, instead of something of hope,” she says. “The community loved it and they were very receptive, and people would always ask me who is it, and I would say it’s just a generic person. And they were all with it.”

Even though the subject was imaginary, Williams says many folks saw someone they recognized in the image.

“It really struck me where people were saying, ‘This reminds me of my son that just passed,’” she says. “They even gave out the description: ‘He was wearing a hoodie, his hair looked like that, his skin was this skin tone,’ and that really hit me because when you’re doing stuff like that you don’t really think about it.

Williams grew up down the street from the mural, on Columbia Avenue, “between Genesee Street and South Plymouth so it’s just right in the cut,” she says. She also attended St. Monica Church when she was younger, and has a cousin who also grew up in the neighborhood.

Down the street from the mural is the Boys & Girls Club of Rochester, which was the site of a shooting in 2015 that claimed three lives.

“That was a tie in to that too,” Williams says. “But if I were to do a mural of someone specifically, I don’t feel like that would be fair to any of the other families who’ve lost someone. But just creating one person who represents not even just boys but girls, fathers, mothers, everybody. It also shows a softness to it, with the flowers. And in the hoodie, it looks like every other kid that you see. I didn’t have a set, dedication to a specific person, it’s just all of them.”


Also this year, Wall\Therapy worked with Renaissance Academy Charter School of the Arts, for which Wall\Therapy alum Nate Hodge painted a mural with students. Kindergarten through second grade students provided some sketches regarding “how creativity makes them feel,” Lehman says, and Hodge incorporated the sketches into a painting that fifth and sixth graders assisted with. This collaboration will turn into a yearly project, with a Wall\Therapy artist working with students to create a new mural that adds to the school, Lehman says.

The mural being painted this month at MLK Jr Park is titled “This is Triumphant Music,” words drawn from a piece Martin Luther King Jr. wrote about jazz. It’s a commission from the City of Rochester and the first time Wall\Therapy has worked formally with the city since 2013.

The artists wanted the mural to have a tie-in with King, “but something that was more uniquely Rochester, uniquely this space with music and bringing people together,” says artist Sarah Rutherford. “It was important for us that we feature local, living artists, to really show the vibrancy of our community,” she says. “That was pretty key, and each musician is a different genre of music and has their own niche.”

The vibrant mural is a spectrum of color, with crisscrossing geometric lines that echo the metal structure above the park. From left to right, it features portraits of emcee Moses Rockwell, soul and funk frontwoman Danielle Ponder, and indie singer and harpist Mikaela Davis, painted as if they are lifting their voices together. 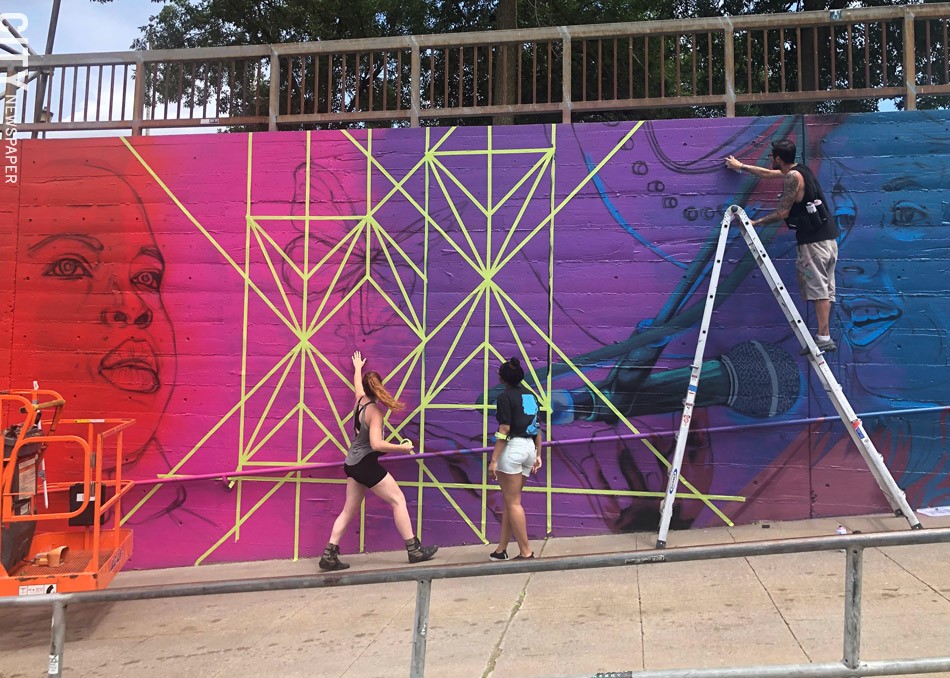 “It was really important to us to depict living artists in Rochester, as fairly young living artists ourselves,” says artist Justin Suarez (aka Mr. Prvrt). “Rather than historical figures, these are people who are currently creating and adding to the culture of our city. So the idea of celebrating that while they are alive was really appealing to us.”

Williams, Rutherford, and Suarez are joined by youth apprentices Tehya Bollar, Alex Baez Rivera, and Paris Cockrell, all former Roc Paint Division members. The group will be at the park until 6 p.m. each day until the work is complete, and will be live painting at Thursday’s Party in the Park event. 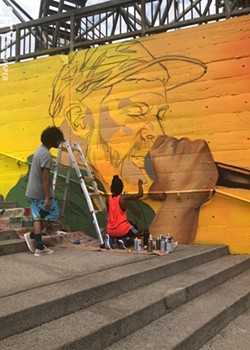 Though there won’t be a formal mural festival this year, Wall\Therapy organizers have a bunch of other projects in the hopper, and are pursuing some grants to fund future murals and events, and generate year-round momentum for the organization’s activities.

“We’ve been in talks with a couple folks, and the plan is absolutely to pick back up next year,” Lehman says. “Some people have been traveling who want to swing through, and we want to do little pocket murals again like we’ve done in the past.”

Wall\Therapy is working on scheduling another visit by renowned graffiti photographer Martha Cooper, and screening her recently released documentary, “Martha.”

And 2021 will mark the 10th anniversary for Wall\Therapy, which was founded in 2011 by Dr. Ian Wilson. “Ian and I have had the stars-in-our-eyes conversations,” Lehman says. “A little bit of bringing back some fan favorites, and folks we love that we want to bring to town again.”

In the meantime, Wall\Therapy organizers do mural tours with schools and different groups “to have deeper-level discussions with fans of the project,” Lehman says. Earlier this year he conducted a tour with students from Dansville.