To put it simply, competing in a criterium is not easy, says cyclist Adam Myerson.

"Bicycle racing is very tactically complex," he says. "The best thing I could compare it to is trying to play speed chess with someone while running on a treadmill, and juggling at the same time."

While it (sadly) doesn't involve juggling, this type of bicycle race does require a rare athletic aptitude. A criterium — or crit for short — is often held on a mile-long course, normally on city streets. In total, the race is often around 30 miles long, rather than the 100 to 150 miles on the stage of a race like the Tour De France, Myerson says.

"Cornering and sprinting out of turns are a much bigger factor than the ability to climb a mountain," he says. "It's very much American-style racing."

Scott Page, the executive director of the upcoming Rochester Twilight Criterium and the owner of Full Moon Vista on South Avenue, agrees. He adds that this type of race — which he describes as "NASCAR on two wheels" — puts a different spin on how most people view the sport of cycling.

"People always ask me, 'If the Tour De France guys came here, how would they do?'" he says. "They'd get destroyed. Because they aren't used to" this type of racing.

Aside for swapping raw speed over endurance, Rochester's crit has a different challenge — the downtown race will largely take place after the sun has gone down.

The 2015 Rochester Twilight Criterium will take place August 15, with cyclists zipping around nine corners in a mile-long stretch through the southeast corner of Downtown Rochester. Things will conclude scenically for the racers at the finish line, located on the Broad Street Bridge.

The men's pro race starts at 8:05 p.m. and will be about two hours long. Pro women cyclists will race the course at 6:25 p.m., and there are multiple times for amateur cyclists as well.

The race will close much of downtown for a majority of the day, and Page says he is expecting 70 to 100 riders and around 20,000 spectators at the event. Aside from the racing, the day will include food trucks, a beer garden, and announcing from Frankie Andreu — who was once a teammate of Lance Armstrong — and the well-known voice of Richard Fries.

In past years, the crit has attracted an even larger audience, but due to financial reasons, the cycling event has been on hiatus for nearly a decade. 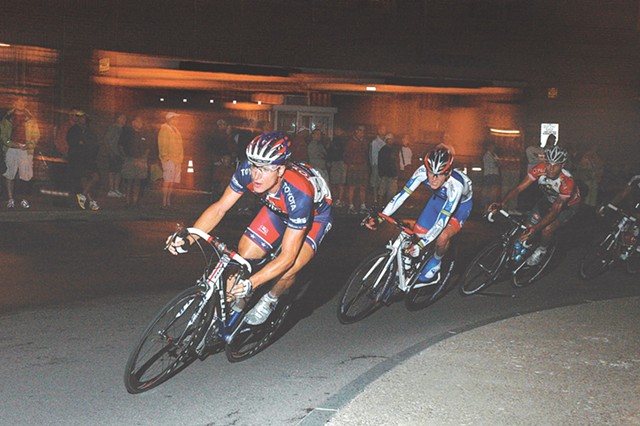 Crit competitors first roared through Rochester streets in 2004. Page says the country's bleak economic outlook in 2008 ended the event that year. While he says he knew it would return eventually, he didn't think it would take this long.

"I thought it's be out a year or two at the most, but then it kept going," Page says.

In the meantime, Page along with other organizers, focused on Full Moon Vista, their South Wedge bike store. Shortly after the mayoral change in Rochester in 2014, the group approached the city about reviving the event. They add that the city has been supportive of bringing the race back to Rochester. And the competitors have been excited about the Flower City return, as well.

Training for the crit

For the cyclists, the stop in Rochester is part of a season long tour. The National Criterium season began in April and continues through September. That 5-month time span features 17 events, Myerson says. As one would imagine, the training for a crit tour is intense.

"I spent February and March in Tucson, Arizona, training 500 to 600 miles per week — about 30 to 35 hours — to prepare for the season," says Myerson, who currently lives in Boston. "Once the racing season starts, we are mostly traveling and recovering between events, and my training volume goes down by about 50 percent."

The training involves more than just a bicycle. In fact, technology has helped cyclists learn new things about their performance. Myerson explains that most competitive cyclists race with a power-measuring device somewhere on the bike. The device measures torque, then sends that information to a computer on the handlebars, which records and displays power, heart rate, speed, distance, cadence, and GPS information. Myerson — who is also a trainer — says this information is important.

"I analyze that data for my clients, and then devise specific training programs for them to follow based on that information," he says.

Despite the rigorous training, and the rush of the race, crit is about more than just physical prowess. It takes a certain mental acumen too.

"In a 90 to 120-minute-long criterium, you have to be level-headed and calculating," Myerson says. "You have to be able to plan 20 moves ahead while riding as hard as you can at the same time."