Every few years for the past 30 years, a New York politician asks us to get on board the high-speed rail train.

The latest request comes from Governor Andrew Cuomo, who will announce during his State of the State address on Wednesday a panel of engineers that he said will “re-examine past high-speed rail plans, question and rethink every assumption and method, and recommend a new plan for how to build a faster, greener, more reliable high-speed rail in New York.”

As part of their research, the engineers ought to visit the new Rochester train station named for Louise Slaughter, the late congresswoman who was also known to fire up the high-speed rail defibrillator on occasion.

What they would see is a $44 million facility that, on the outside, is equipped to handle faster trains and, on the inside, hasn’t been able to rent out its two retail spaces in the more than two years since it opened.

An Amtrak leasing agent said there hasn’t been much interest in the spaces, which don’t include sewer or water hookup and rent for between $2,512 and $3,930 per year. (An Amtrak spokesman said the leases range from $8-$10 per square foot per year for the spaces, which are 314 and 393 square feet.) One Amtrak clerk called them “sad, empty retail spaces.”

That there isn’t enough foot traffic to support a coffee shop or a deli or a convenience store at the new train station for roughly $300 a month — the nicest building in a neighborhood where those amenities are few and far between — leaves one to wonder about the market for high-speed rail service upstate.

Of course, any traveler of the so-called Empire Corridor, that 463-mile stretch of track from Niagara Falls to Albany and New York City, would appreciate a faster ride.

Right now, the train pokes along at an interminably slow 50 to 60 mph. Trips from Rochester to New York City take anywhere between 7 and 9 hours — and that’s if the trains are on time.

Just 70 percent of Empire Corridor trains are on time, according to Amtrak’s own report card. That’s mostly because the trains run on tracks owned by the freight carrier CSX Corp., which prioritizes its own traffic over that of Amtrak.

So, naturally, a faster ride would be welcome. But how many of those Empire Corridor travelers really need faster service? Are they willing to pay for it? Would the benefits outweigh the cost?

What is the cost? That depends how fast we want the “high-speed” rail service to go.

The last study of the matter was a 2014 joint state and federal report that found increasing the average speed to 77 mph, while topping out at 125 mph, would cost $15 billion. Getting from Niagara Falls to New York City would take 6 hours on an express train and 8 hours, 40 minutes on a regional train.

The report rejected as too expensive the fastest high-speed rail options — those bullet trains that zip around Europe at 190 mph and the magnetic levitation, or “maglev,” trains in China and Japan that top out at 225 mph. The report put their price tag at nearly $45 billion.

So, what Cuomo is talking about isn’t true high-speed rail. It’s higher speed rail, and it still costs more than New York appears to be able to afford. The state faces a budget deficit of $6 billion.

Proponents of high-speed rail, like the governor, claim the service can transform economies. Academic studies have shown mixed results, however.

While high-speed trains reduce travel time, traffic congestion, and pollution, long-term economic effects are conditional on other factors, such as city size, industry, amenities, and distance from the most popular destinations on the route.

Investments in high-speed rail between heavily-congested, popular destinations within close proximity make sense. The Empire Corridor doesn’t have such places, not really. 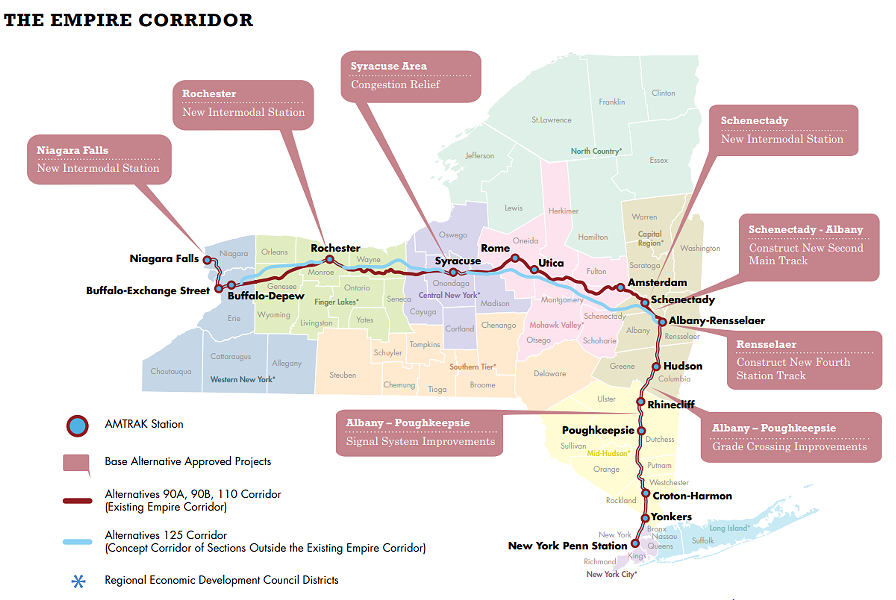 In 2009, a national infrastructure planning group identified Rochester and New York City as among the best city pairs for a high-speed rail route. But the route was 50th out of 50 on the list. Buffalo and New York was 43rd. The best pairing was, unsurprisingly, New York City and Washington.

Also near the top was Los Angeles and San Francisco, where work on a 438-mile high-speed rail line linking those cities by trains traveling 164 mph was modified last year after the completion date of 2020 was extended to 2033 and the estimated cost of $33 billion swelled to $77 billion. The project is now reportedly confined to a truncated stretch of track in the Central Valley.

Before New York sinks billions of dollars it doesn’t have into a route of similar length, Cuomo’s panel of experts must consider whether there’s a market to support it.

Amtrak would not divulge the number of intercity passengers on the Empire Corridor. A spokesperson would only say that 132,434 people either boarded or disembarked a train in Rochester last year. That translates to 363 passengers entering or leaving the station each day.

Apparently not enough to support a coffee shop or a deli or a convenience store at about $300 a month.

CORRECTION: This column has been modified from its original version to reflect a change in the costs to lease the retail spaces at the Rochester train station that were initially provided by Amtrak. The leases range from $2,512 to $3,930 per year, not per month, according to Amtrak.