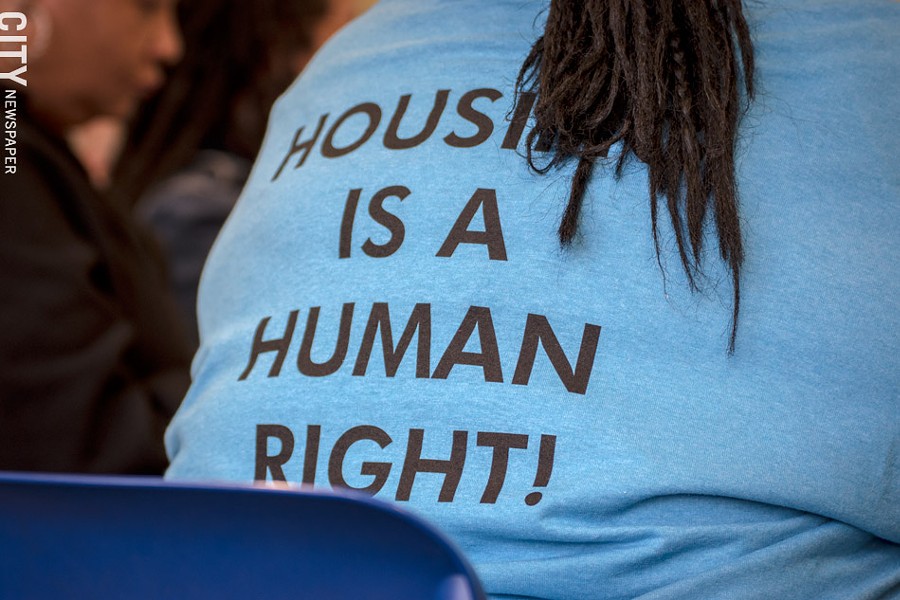 PHOTO BY RYAN WILLIAMSON Housing activists have been pushing for stronger tenants-rights laws for more than two years.

PHOTO BY RYAN WILLIAMSON Ryan Acuff: “The first step is educating people about what this means.”

Rochesterians who rent their homes, like renters throughout the state, now have important new protections, thanks to action last month by the state legislature and the governor.

A group of new laws – described by industry analysts as the toughest of any state in the country – increase legal protections for the state's 8.2 million renters for the first time in years. They apply to tenants and landlords in municipalities statewide, and cover everything from security deposits to land leases in mobile home parks.

Housing activists from around the state have been pushing for the changes for more than two years. And the changes will have a big impact in Rochester, where about 64 percent of residents are renters, not homeowners.

Landlords can now ask for only one month's rent as a deposit. Gone are the days when apartment owners could ask for as much upfront money as they could get from prospective tenants.

Tenants have the right to ask for a walkthrough inspection before and at the end of occupancy.

Since many tenants need their security deposit returned quickly so they can put that money down on another apartment, landlords must provide an itemized list of any part of the deposit they plan to keep for damages. And tenants now have 30 days to fix the repairs the landlord cites. Previously, they had only 10 days.

Landlords who evict a tenant after a legitimate complaint about the condition or habitability of an apartment – lack of heat, broken refrigerator, no hot water – may be subject to as much as $10,000 in fines.

Judges can now stay an eviction for up to one year to give tenants time to find a similar rental in the same neighborhood. Previously, the stay was limited to six months.

Judges also can stay an eviction up to a year if it causes a hardship – if it adversely affects the tenant's health, for instance, or will require a change in schools for children.

Toughening the retaliatory eviction law was one of the most notable changes the legislature made, housing activists say.

Landlords can continue to give one another references on a tenant, but they now are prohibited from sharing tenant information on industry databases, a practice that has resulted in blacklisting some people from the housing market.

While the other changes in rent laws impact tenants and landlords statewide, one particular law – an expansion of the Emergency Tenant Protection Act of 1974 – may not. The law, a controversial rent stabilization measure, governs how much rent can increase each year in certain apartment buildings.

It's not clear whether it will apply to Rochester. Previously, the ETPA applied only to New York City, Nassau, Rockland, and Westchester Counties, but in June it was expanded to cover all of the cities and towns in the state. It isn't mandatory, however. Municipalities can choose to opt in.

In addition, municipalities have to meet specific requirements before they can opt in. First, the law applies only to apartment buildings built before 1974, and they have to contain six or more units.

In Rochester, City Council and the mayor would have to agree to commission a "housing vacancy analysis" that examines those buildings to determine their condition and the current availability of their apartments. The city can opt in to rent stabilization only if the vacancy rate in those buildings is 5 percent or below. At that vacancy level, presumably, market forces could be pushing rents upward.

City Council and the mayor would then have to approve legislation to opt in and would have to create a nine-member Rent Guidelines Board, which would establish maximum annual rate increases in those apartments.

Housing activist groups, including those in the Rochester area, are applauding the new laws, especially the expansion of the ETPA. Rochester has a housing crisis for low-income residents, they say. And they've already begun pushing City Council members to consider opting in to the ETPA, says Ryan Acuff, a long-time local activist.

Activists met recently with City Council President Loretta Scott and with Council members Mike Patterson, Jackie Ortiz, and LaShay Harris. "The first step is educating people about what this means," Acuff says. "Rent stabilization would provide city tenants with a lot more security than they currently have, and the city's housing would improve because code enforcement would be beefed up. A lot of tenants currently don't report safety and repair problems, because they fear retaliation."

Rent stabilization could have an impact on education in city schools, too, Acuff says. Improving stability in the housing market would reduce the number of times families move and children have to change schools because of an eviction or to save on rent. Student mobility is a serious concern, because it can lead to students falling behind academically, school officials say.

Alex Yudelson, Mayor Lovely Warren's chief of staff, says the administration is still studying the changes to the rent laws and hasn't decided whether to conduct a housing study. No one knows for sure what the city's current vacancy rate is for apartment buildings built before 1974, Yudelson says, and whether the city meets the law's 5 percent requirement.

But a 2007 housing study commissioned by the city said Rochester's overall vacancy rate had surged from 7 percent in the late 1990's to 10 percent. (It did not, however, single out older apartment buildings.) Since then, many older, vacant homes in some neighborhoods have been demolished, and there has been little new housing construction for people with low-incomes.

While the new laws were a huge victory for tenants, they aren't perfect, activists say. The legislature didn't approve a good-cause eviction bill. Currently, if the tenant doesn't have a lease, landlords can evict at will even if the tenant has lived in the property for a long time and paid rent in a timely manner. Good-cause eviction protection would require landlords to explain to a judge legitimate reasons for the eviction.

The legislature also didn't approve relief from rent increases linked to major capital improvements and individual apartment improvements, a practice some landlords and owners use to cover some of the costs of upgrades.

And the activists still have a fight ahead of them to keep the new laws in place. Real estate investors and landlords wasted no time in pushing back. A group of real estate organizations and prominent landlords filed a lawsuit shortly after the new laws were enacted with the aim of destroying the entire rent-regulation system in New York City and beyond.

"They are betting that the tighter laws passed in June will bolster their claims that the rent-stabilization system – which subjects units to government-mandated caps on rent increases – is unconstitutional and amounts to an unlawful taking of property," according to an article in the New York Times.

Landlords and real estate organizations are more likely to have the resources to wage a legal fight against a tenant. Even though their lobbying effort failed to stop the bills from becoming law, it highlights the power and economic imbalance in New York's housing market, says activist Ravi Mangla, activist and political education program manager with Citizen Action of New York. That imbalance has long given landlords an advantage when it comes to compliance with rent laws, Mangla says.

"This is the problem of massive imbalance of power," Mangla says. "Landlords will likely have legal support, and tenants probably won't. It falls on the tenants to challenge landlords without the same resources to bring them to court."

And many landlords argue that there's no need for regulations outside of New York City because there's no housing crisis in cities like Rochester. That's absurd, Mangla says.

"Rochester has a huge number of rent-burdened people living here," he says. "That has to do with being a high-poverty city."

A draft version of the Rochester 2034 Comprehensive Plan seems to reach a similar conclusion. "Housing affordability is a significant issue in the city," it says. "Nearly 60 percent of renter households and nearly 25 percent of homeowner households in the city are 'cost burdened,' paying more than 30 percent of their gross income to housing costs.

But the plan goes on to say that housing affordability in Rochester is rooted in low incomes, not high, rising housing costs. "More than 25 percent of city households have incomes below $15,000 a year," the plan says.

That could suggest that rent stabilization would not address housing affordability. Acuff and other housing activists don't agree.

"Housing is at a tipping point," Acuff says. "Under current minimum wages, rents are rising much faster than incomes. And it's happening everywhere."