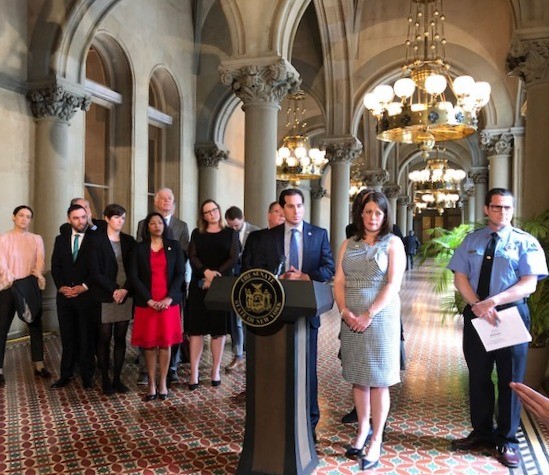 Governor Andrew Cuomo and the Democratic-led state Legislature have agreed on the most ambitious goals in the nation for reducing carbon emissions in the next few decades. The Assembly approved the legislation early Thursday after the Senate voted for it on Wednesday.

But both supporters and opponents say the key to the measure's success or failure is in the details of how it will be carried out.

The Climate Leadership and Community Protection Act sets the goal of reducing all greenhouse gas emissions from all sources, including cars, by 85 percent by 2050. All of the state's electric power sources must be carbon-free by 2040. And 35 percent of the state's energy funds, used to install clean energy sources, will be reserved for disadvantaged communities that have been adversely affected by pollution.

Senate sponsor Todd Kaminsky, a Democrat from Long Island, said once the targets are met, they will create a fundamental shift in the state's energy use.

"We're envisioning people driving electric cars in 2050, heating their homes using renewable energy in 2050, going to work in buildings that are emitting far less carbon than today," Kaminsky said. "With Washington sitting on its hands during a crisis, New York really had to step up."

In 2017, President Donald Trump pulled the United States out of the Paris accord on combating climate change.

Kaminsky said the measure sets up a 23-member panel to devise a specific plan of how to meet the goals.

"It's going to create a road map to 2050, and it's going to recommend regulations, incentives and a plan to really change the whole economy," Kaminsky said.

Cuomo, speaking on WCNY's "The Capitol Pressroom," said once the measure is approved, it will be the strongest in the nation. The state of California's plan set a goal of reducing carbon emissions by 80 percent by 2050.

"I want New York to have the most aggressive climate change program in the United States of America, period," Cuomo said on Tuesday. Those remarks were a change from several days earlier, when Cuomo said he thought the Legislature's bill was a "political placebo" and that its goals were unrealistic.

The state's major environmental groups praised the deal, calling it a "monumental shift."

"It will drive it," Iwanowicz said. "Surety for the financial sector is also baked into this, because they can now write business plans knowing there is an enormous market potential in New York state."

Katherine Nadeau with Catskill Mountainkeeper said the transition does not necessarily mean that New Yorkers will face deprivation when fossil fuels are no longer available.

"People are looking at climate policy as though they're just being forced to eat their broccoli," she said. "And when you look at what we can actually build up, we're showing you there's cake out there and here's where you can go get it."

The state's Business Council is evaluating the bill. The council's Darren Suarez said he's encouraged that the business community will have a seat on the panels, and that the measure takes steps to ensure that manufacturers who are dependent on fossil fuels to make their products don't just move to other states with lower standards.

He said business owners are also concerned about climate change, but they need practical solutions to reduce emissions. He said the goals in the legislation are very ambitious and somewhat unrealistic.

"There could be a breakthrough technology that could be moments away," Suarez said. "Or it may not come at all, which means we are in real trouble. All of us."

All sides agree that much will depend on the plans that the panels come up with.