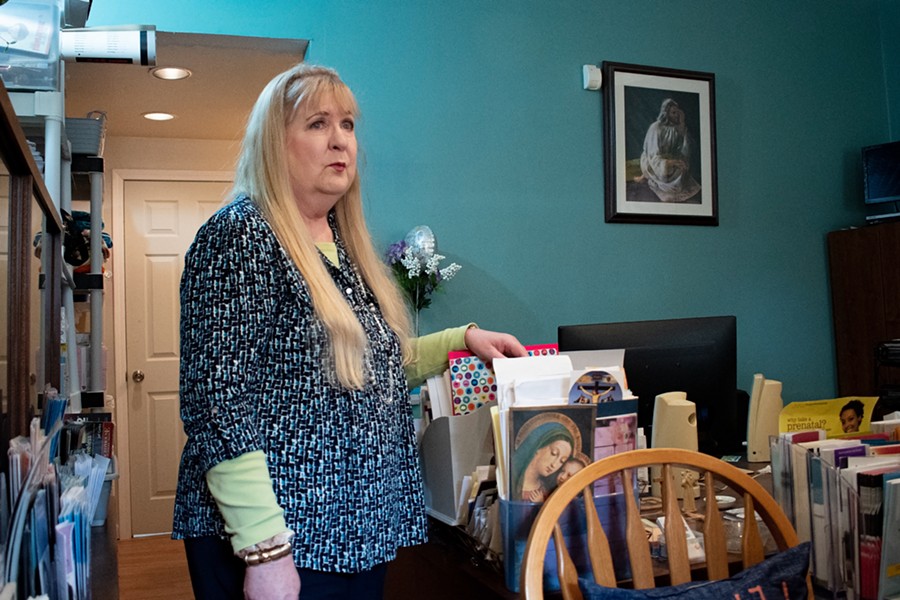 The front reception area of the building, located on University Avenue near Planned Parenthood, is no different. Volunteers guide mothers of young children toward free infant clothing, diapers, and other essentials which have been donated to the center.

But in the main office Focus's founder and director Mary Jost, the atmosphere changes. Pamphlets, newspapers, magazines, and DVDs cover most flat surfaces. They warn of the dangers of condoms or birth control, discuss atonement for sexual sins, and argue that abortion amounts to Black genocide. Jost’s aim is to convince as many young women as possible not to have abortions to end unwanted pregnancies.

“We tell the truth, that’s what the girls aren’t hearing out in this big, bad world: the truth,” Jost said. “They’re being deceived all of the time…they’re not being told anything, they’re just told to make an appointment over at Planned Parenthood and kill their baby, that’s what it is.”

But critics view facilities like Focus as manipulative. They argue that instead of offering well-rounded healthcare options, the facilities offer a limited perspective framed around shame, fear, and questionable advice, and they do so with little oversight.

A bill passed by the New York State Assembly in April that’s under consideration by the Senate could change the situation. If enacted, the legislation would direct the state commissioner of health to conduct a study of so-called “limited services pregnancy centers” in New York.

“The way they are framed in our community as healthcare, or as community healthcare, really has been frustrating to say the least,” said Assemblymember Sarah Clark, a co-sponsor of the bill. “And if we’re going to do anything about it, we need to study it.”

The study would evaluate whether the facilities use coercive tactics, fail to inform clients of the full scope of health care services available to them, and delay care for women, including abortions. The legislation would require the health commissioner to make recommendations for addressing any service gaps or negative effects resulting from the operation of pregnancy resource centers in New York.

What is a pregnancy resource center?

Facilities like Focus go by many different names, including pregnancy help centers, pregnancy resource centers, and crisis pregnancy centers. They are often quasi-religious organizations with the goal of deterring women from having abortions, regardless of circumstance. Some, like Focus, have no medical professionals on staff and can only offer pregnancy tests.

Others, like CompassCare, which has facilities in Rochester and Buffalo, have some medical staff on hand and offer limited medical services, which critics say are employed to discourage people from terminating pregnancies.

For example, Focus owns an ultrasound machine, but Caring Choices, another local pregnancy help center, parks a van with the equipment in it in front of Focus and offers free ultrasounds to pregnant women, Jost explained. The ultrasounds, Jost added, are more about showing a picture of the fetus to the mother and less about looking at the health of the fetus.

“They’re trying to drive you to what they want, they’re trying to counsel you to keep the pregnancy, regardless of what you want as a patient or individual,” said Michelle Casey, CEO of Planned Parenthood of Western and Central New York. “They do ultrasounds, there’s nobody there with a medical license. For me, that’s a little creepy. From what people have said, they wear white coats, presenting as medical people when they’re not medical people at all.”

Jost said her mission at Focus is to “save lives.” She believes there’s never a justification for abortion, including in instances of rape or incest. She believes in abstinence, with the sole exception of a married man and woman having sex for the purpose of procreation.

“Every life is created by God and every life is precious,” Jost said. “It’s selfish women that say, ‘I just wanted the sex, I didn’t want the kid, let’s go and take care of it.’ That is not what a woman does, she bears a child. We’re not asking her to raise a child, we’re just asking her to deliver a child.”

Jost sees adoption as the alternative to abortion. Every abortion, she said, could have been a child who went to a “loving couple that would be glad to raise her child.”
Clark, the Assembly member, took exception to that claim, arguing that there is already a massive gap in placement of children in New York.

“Go to (Children Awaiting Parents) any day of the week and you’ll see hundreds of children waiting, particularly older children, that have been trapped in the system for years,” Clark said. “No one’s coming to help them, no one’s offering their time. Instead of standing outside Planned Parenthood being deceptive, why don’t you go to CAP and take on a child that doesn’t have anyone else?”

In 2021, the New York State Office of Children and Family Services counted 21,544 children in the foster care system, 717 of which were in Monroe County.

A battle of information

Critics of the centers have for years argued that the educational resources the facilities offer do not provide an accurate and encompassing view of reproductive and women’s health care. The proposed pregnancy resource center study legislation would give the state health commissioner a charge to evaluate the “the nature of information given to clients or potential clients at pregnancy centers.”

One pamphlet, which proclaims that “In the New Klan lynching is for amateurs,” features a cover cartoon of a doctor in a Ku Klux Klan hood. When opened, the pamphlet features a graphic image of an aborted fetus, with text describing Planned Parenthood founder Margaret Sanger’s ties to the eugenics movement. It argues birth control and abortion are tactics to eradicate the Black population. A documentary offered to Focus visitors, “Maafa 21,” spends two hours arguing the same.

Another pamphlet details a man wasting away from HIV as a likely consequence of having casual sex. Another states a man’s body is subject to autoimmune disease and cancer due to built-up sperm after a vasectomy. Yet another lays out prayers for atonement in the eyes of God for a woman who receives an abortion. Others argue against the efficacy of and preach the dangers of condoms, IUDs, and other safer sex practices.

People familiar with pregnancy resource centers characterize these materials as a clear tactic to sway people in vulnerable situations.

“There’s a lot of discussion they have about how to just get people in the door, so they can start that conversation of how abortion is wrong, abortion is evil, abortion is murder, the typical rhetoric of places like this,” she continued.

Along with the material offered at Focus, Jost said the facility has also been a hub for organizing the regular protests outside of Planned Parenthood — the demonstrators also try to get women heading into the facility to Focus or to the ultrasound van. She said she was regularly involved for years, but now lets other people affiliated with Focus do the protesting.

Despite all of this, Jost argued that Focus’s tactics aren’t manipulative and that Planned Parenthood has been the one guilty of coercing and manipulating women into abortions.

Casey scoffed at that sentiment and said that when people come into Planned Parenthood regarding a pregnancy, they are given counseling sessions where all of their healthcare options are laid out clearly.

“There absolutely can not be any coercion,” Casey said. “The goal of counseling is to let our patients know what their options are, and let them choose based on their own values and life circumstances what they want to do that’s best for them.”

In 2019, New York enacted the Reproductive Rights Act, a package of laws that provides for the ability to get abortions up to the 24 week mark of a pregnancy.

Clark believes that even if those rights are protected in New York, the state still has a way to go to ensure reproductive healthcare, including abortion, is treated as healthcare. To get there, pregnancy resource centers need to be limited in how they can operate, she added.

Casey and Clark both believe that reproductive healthcare is still treated with some level of stigma, even in New York, which has liberal views on abortion compared to other states but has allowed pregnancy resource centers to keep a solid foothold.

“You wouldn’t dissuade someone from coming in and getting the prostate cancer treatment they want, like, ‘Oh, Western Medicine is bad, you should just live with it and whatever happens happens,’” Casey said. “You just wouldn’t do that. It’s a pure manipulation and not letting people make their own decisions about their lives and health care, and it wouldn’t be accepted in any other place in medicine.”

Both also emphasized that abortion and the rhetoric around it is not simply a moral litmus test for politicians, but a real issue with human lives on the line. Almost always, it involves a woman making a profoundly personal choice.

Lindsay Weldon was 30 in 2015 as she made the trip home to Rochester by way of London. She was early into an unplanned pregnancy. Her first stop after arriving back in America was Planned Parenthood on University Avenue.

She was on birth control at the time, but due to Crohn’s Disease, she was unable to adequately absorb the pills, something she did not know about until visiting Planned Parenthood. She also was advised to take abortion pills after visiting a clinic in England, which also likely would have not worked due to her condition.
Weldon, in the end, received a surgical abortion known as dilation and curettage (D&C for short), and had an IUD implanted.

“It was probably the best healthcare experience I’ve had ever really,” Weldon said. “...They laid out all of the options: ‘Here is everything that can be done, here’s why some people do this, some people do this, we’ve looked at your health history, we can give you recommendations, but you can do whatever you want.’”

Jost proudly calls herself “an extremist,” but that does not mean Focus is a fringe resource. She estimates that she sees about 200 women a month, although there is no way to tell how many are actually receiving counseling and how many are just taking donations.

Casey, meanwhile, warned against dismissing the danger to public health posed by places like Focus.

“I think it’s a very shame-based approach and that they convince women in a vulnerable time that what they are doing is not okay,” Casey said. “...Some people have an abortion and they don’t think twice about it, it’s an easy decision and it’s just matter of fact, and other people struggle with it.”

“The important thing is they make their own decision with it, without being manipulated,” Casey said.

CORRECTION 5.19.22: An earlier version of this story inaccurately identified Mary Jost as the owner of Focus Pregnancy Help Center. She is the founder and director. The story has been updated to reflect the change.