Four of City Council’s nine seats were up for grabs in November and two of them went to candidates who hadn’t previously held elected office. Former city school teacher Mary Lupien won the East District seat, formerly held by Elaine Spaull, who opted to not run for a fourth term. Jose Peo, a mortgage loan officer with Bank of America, won the Northwest District seat, formerly held by first term Council member Molly Clifford, who also opted not to seek re-election.

Lupien recited her oath of office with her daughter, Maya, while Peo recited his oath with former Mayor Bill Johnson. 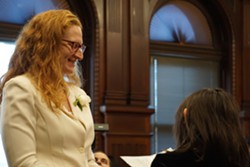 Lupien credited her work with the 2016 Bernie Sanders campaign for her entrance into politics.

Peo, an Army veteran and a member of the Northwest District Democrats, said his election was the culmination of years of hard work. 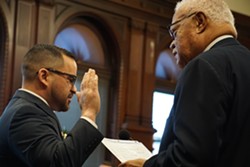 “Late nights, I envisioned the person I wanted to be,” Peo said. “It did not come easy, and it certainly did not come quickly, but the best things in life never do.”

LaShay Harris, who was initially appointed to City Council to fill a vacancy left by the resignation of Adam McFadden after he pleaded guilty to wire fraud charges in April, was elected to the seat in November. She was sworn in by Warren.

Michael Patterson, who has served on City Council since December 2013, was re-elected to his Northeast District seat in November. He was also sworn in Thursday afternoon. 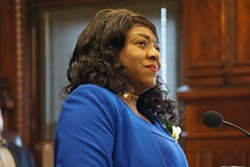 City Council’s leadership will remain the same in 2020. Members re-elected Loretta Scott to her fourth term as president and they re-elected Willie Lightfoot as vice president.
The council members also reappointed Hazel Washington as city clerk.

The first full City Council meeting of the year is on Tuesday, January 21.