After much anticipation, New Ethic Pizzeria & Café opened the doors to its own shop on September 4. I am always excited when a new pizzeria opens, because I am of the mind that there is no such thing as too much pizza. But it doesn't hurt to have a unique feature, which New Ethic has: its owner believes it is the first and only all-vegan pizzeria in the state, north of New York City. When I learned that fact, I was more excited for its opening day, checking and refreshing its Instagram and web page a few times a day. I am not vegan myself, but it never hurts to eat exclusively plant-based cuisine on a regular basis. Besides, vegetables and fruits are delicious.

Owner Matt Nersinger started out his venture last year as a periodic pop-up at 2 Ton Tony's in Irondequoit. I always missed the pop-up dates, so I could only enjoy the photos of his creations online. But now he's got a spot on Titus Avenue, a neighbor to the pizzeria that hosted him throughout the year, and the building that houses New Ethic is much cheerier for it.

You might think that a vegan pizzeria is just latching onto a dietary fad for personal gain, but Nersinger himself a vegan. And though this is a business, he is running it in line with his personal beliefs. He says he wants to provide folks with a plant-based dining opportunity, for sake of healthy living, the planet, and safety of animals. Some fast food chains have started offering "vegan" items, but in some cases their vegan patties are fried on the same grill as their beef patties, the dollops of mayonnaise they put on their sandwiches are still egg-based, and you can still get the burger with cheese. In truth, all they really did was swap out one protein for another and kept moving. It would be a whopper of a tale to claim that they really care about the ethic of veganism.

Nersinger checked every detail of what came into his shop to ensure there would be no cross-contamination, even in the production of his ingredients. He uses locally-grown vegetables as much as he can. The beverage refrigerator is stocked with sustainably sourced Just Water and Galvanina teas and beverages. The Coca-Cola products are all sugar cane-based instead of the more common high-fructose corn syrup. Even the ice cream for his milkshakes is vegan, and by the looks of the people enjoying them in the shop, they are just as boys-to-yard-bringing as a regular milkshake.

New Ethic also offers vegan wings, with a sugar cane "bone" in the center. Though I didn't sample them, they look delicious. For anyone who is into wings, one of the most satisfying parts of a wing feast is rending the meat from the bones and tossing aside the cleaned-off bone into a bowl. Perhaps it is the inner Giant from Jack and the Beanstalk in me. If I wanted boneless wings, I would just get chicken nuggets. That New Ethic went out of their way to provide that protein-rending experience in their vegan wings shows a commitment to customer satisfaction that is hard to top.

If you like a little kick in your pie, the 10-inch "A Fire Inside" ($10.99) is a decent choice. Its base is a spicy Firestorm Sauce, banana peppers, jalapeños, and hot cherry peppers. This is not for the faint of spice. Every bite was bursting with the flavor from the hearty sauce and peppers. They do have 11 milder choices if hot and spicy is not your thing. Additionally, you can create your own pizza (small $9.99, large $16.99) in any combination of toppings ($0.99 each for small, $1.59 each for large). New Ethic Pizzeria & Café promises to satisfy with its extensive menu of vegan selections. It is truly vegan fare for everyone.

Since I visited on New Ethic's first day of business, I expected them to be busy and for a line to be snaking through the shop. But there was a small line, and though kitchen was a blur of motion, the folks waiting for their orders were sitting patiently and calmly. There were no grumbles of delays in orders, just the staff working as hard as they could and customers enjoying the space while they waited.

Periodically, manager Tony Proietti would come out to update folks on the progress of their orders, and boast about the ingredients or the delicious vegan milkshakes. He was apologetic about the wait time, but I do not think anyone was surprised that a packed restaurant on its first day open was slammed with so many food orders. I ordered pizza for take-away, but when I received it, it smelled so good I had to try it right then.

Throughout the minty-green-painted restaurant, there are placards and signs that declare the space welcomes all immigrants, religions, abilities, genders, orientations, races and ethnicities, ages, and languages. They are very nice signs, and I appreciate the sentiment, but I am often skeptical of businesses that post things like this, as they sometimes are more performative than true.

But it looks like words are actions at New Ethic. I entered the restaurant, and it was full with folks of all ages, genders, sexes, races, and ethnicities. People were talking and laughing across separate tables, and a big group that I thought were there together were actually strangers making new acquaintances and friends. 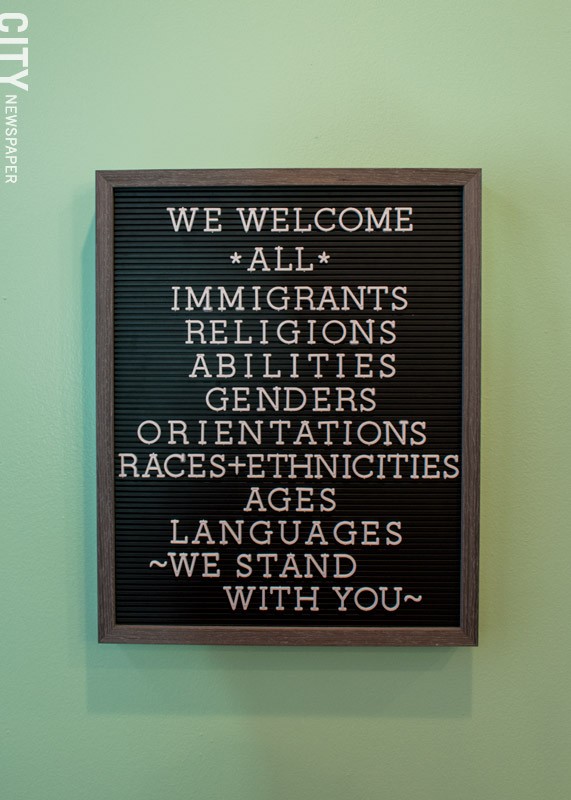