An early order of business in the $20.5 million conversion of the building into a senior living community was to remove the black paint, spread floor to ceiling in some rooms, and fake blood from the walls, both left over from the haunted house, says Josh Haley, regional leader of Home Leasing, one of the companies involved in the project.

Tenants should start moving into Eastman Gardens, which is the dispensary’s new name, this month. The three-story complex will have 52 mostly one-bedroom units for seniors aged 55 and above. All of the apartments are adaptable so that residents can “age in place,” and nine of the units are fully accessible for seniors; the latter units include lower counters and grab rails in the bathroom and bedroom. 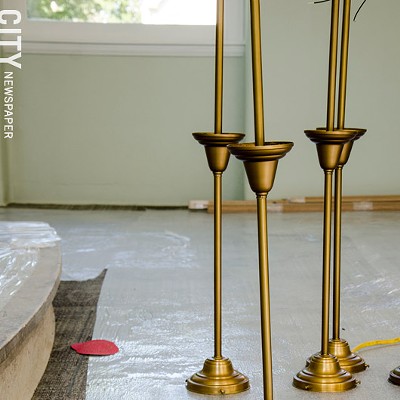 The living units range from 600 to 900 square feet of space, with the average being about 750. Many of the apartments have high ceilings and large windows that let in lots of light. The building has been under construction for about a year.

The Italian Renaissance-style brick building, instantly recognizable on East Main in the Marketview Heights neighborhood, was built by George Eastman in 1917. Hunt says that Home Leasing has been careful to honor the building’s historic character and its place in Rochester’s cultural memory.

The former children’s waiting room on the first floor, right inside the East Main Street entrance, will be converted into a community room, for example. Local artists will recreate the nursey rhyme-themed mural and wood carvings that used to be on the room’s walls. And the distinctive art-tile mosaics outside the building’s Main Street entrance have either been preserved or, in the case of two that could not be saved, replaced.

The complex will also have a first floor fitness-laundry room — located in a former recovery room for tonsillectomy patients — and an outdoor gathering area with picnic tables, raised garden beds, and grills.

Home Leasing talked to former employees of the Dental Dispensary and reviewed old photographs to learn about the building and to match historic details, Hunt says.

The building is listed on the State and National Register of Historic Places and is a City of Rochester landmark. The Landmark Society named the Dental Dispensary one of its “Five to Revive” in 2013, making it a priority for preservation and rehabilitation.

The project has received funding assistance from the City of Rochester and the state.