PHOTO BY JACOB WALSH Djifa Kothor (left) of Rochester Refugee Resettlement Services and Getachew Beshir of Catholic Family Center.
For upstate cities whose populations have been dwindling year after year, incoming refugees have curbed the loss. The cities’ long-term economic troubles, marked by vacant housing and low-skilled jobs, have made them popular destinations for newcomers.

Some 8,100 refugees have sought new lives in Rochester in the last 20 years, for instance.

But advocates for them say the shelter, security, and stability they seek as they try to live the American dream have become increasingly hard to come by in Rochester, prompting many who attempted to settle here to seek new lives elsewhere in the country.

“A lot of refugees come here and then leave,” said Djifa Kothor, a former refugee who now runs Rochester Refugee Resettlement Services, a nonprofit that aids refugees in integrating into American society. 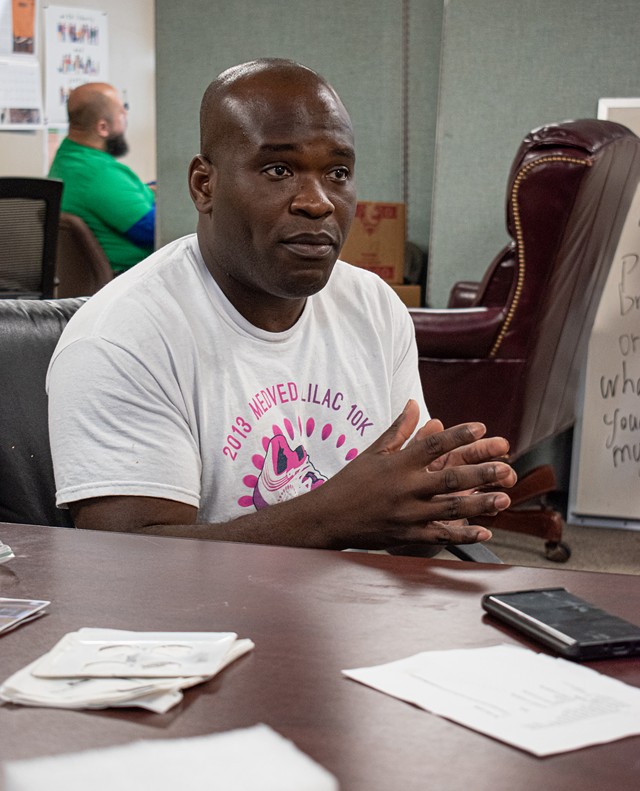 Data provided by the State Department’s Refugee Processing Center makes it easy to know how many refugees resettle in Rochester, or any American city. Tracking whether they move on is more difficult.

But the data suggests that, for at least the last few years, Rochester has been receiving fewer refugees than its counterpart cities across upstate, even those places that are considerably smaller in terms of population and that one might think have less to offer.

While Buffalo has consistently outpaced Rochester in refugee intake, cities like Syracuse and Utica have been welcoming refugees at a rate far beyond that of Rochester, according to federal data.

Last year, according to the state Office of Temporary and Disability Assistance, which tracks refugees by county, Monroe County received 103 refugees, while Onondaga County took in 186, and Oneida and Albany counties each welcomed 104.

“If you’re a refugee, [Rochester] is a good place to come and settle in the United States,” Kothor said. “But when it comes time for you to become self-sufficient, it’s hard.”

Advocates for refugees are hoping something called the New Americans Advisory Council will help change that. Created by the administration of Mayor Lovely Warren in July, the council aims to give refugees and their advocacy organizations a direct link to City Hall to better meet the needs of newcomers.

When it is up and running, the council will have 15 members, 10 of whom are to be refugees and five of whom are to represent the five prominent refugee advocacy organizations serving the area — Catholic Family Center, House of Refuge, Mary’s Place, Refugees Helping Refugees, and Rochester Refugee Resettlement Services.

“Any government, whether it’s the federal level or the city level, should be positive and supportive of these newcomers,” said Getachew “GG” Beshir, who manages the refugee program for Catholic Family Center. “And the reason is they add value.
They bring value to the city. They get employed, they live in city areas that need revitalization, they revitalize those areas, and some of them start businesses, they increase the tax base. There’s a lot of benefit of having new Americans in the community.” 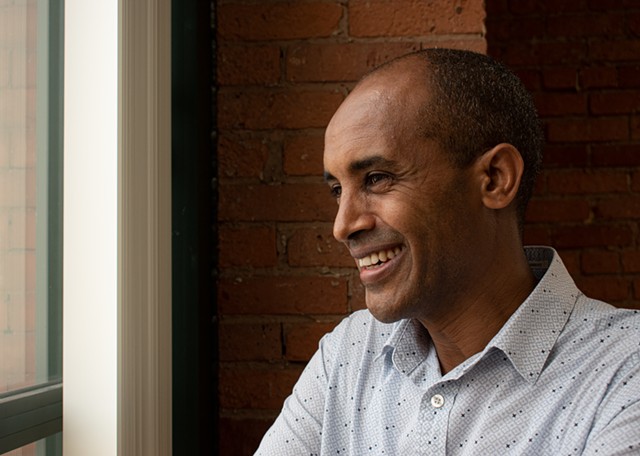 A chairperson for the council has already been named in House of Refuge founder Bijaya Khadka, a refugee from Bhutan by way of Nepal who arrived in Rochester in 2009 at the age of 17. Under his guidance, the mayor is to appoint the other members of the council.

“This advisory board will be a tremendous help to new Americans coming to the city of Rochester,” Khadka said. “We’re already talking with non-profit organizations, they are reaching out and asking for suggestions. It’s a positive sign that we’re seeing.”

City officials approved the council in July, just in time for an expected spike in the number of refugees resettling in Rochester.

While nearly 8,100 refugees settled in Rochester between 2002 and 2019, the last year for which federal data is available, the number of them coming annually plummeted under the administration of President Donald Trump, which capped refugee admittance.

In May, however, President Joe Biden raised the cap to allow as many as 62,500 refugees into the country this year, with a goal of raising the number to 125,000 the following year.

Given that Rochester historically receives about 1 percent of the country’s refugee intake, advocates estimate 625 new refugees will arrive here this year, and another 1,250 next year. 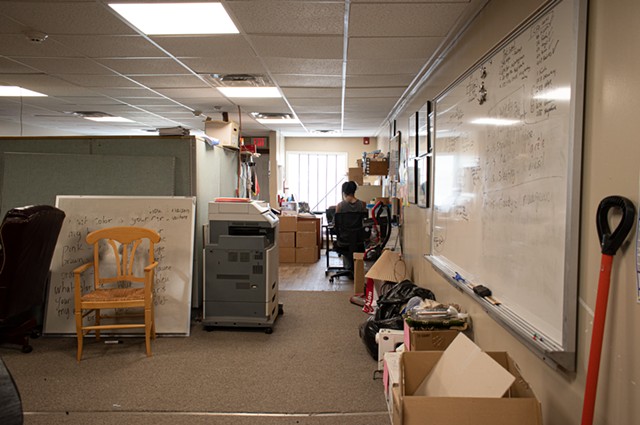 While Rochester’s refugees come from all over the world, roughly two-thirds have hailed from Bhutan, Myanmar, and Somalia. Refugees from Democratic Republic of the Congo, Ukraine, Liberia, and Iraq have also settled here in significant numbers.
Rochester isn’t blazing any new trails with its New Americans Advisory Council. Buffalo, for example, established an Office of New Americans in 2015 to work directly with refugee communities and help them gain access to resources and housing.

Still, advocates see it as an important signal that reinforces the city’s commitment to not only working toward helping place refugees into adequate homes and good jobs, but better understanding refugee communities.

“There’s people from different countries, different languages, different religions, different experiences being in the camps, why they were able to come here, different family situations,” she went on. “Everyone’s story is so unique.”

Advocates agree that Rochester does a good job welcoming refugees and ensuring they get financial support through the Monroe County Department of Human Services. But, they said, it is in finding sustainable housing and work for them that the system begins to show gaps.

Most of the work refugees find is temporary and long-term housing is elusive, advocates said. Opportunities for them to learn English — or find work where speaking English isn’t required — are few and far between, advocates said.

Kothor, of Rochester Refugee Resettlement Services, pointed to the county’s Work Experience Program as an example of an initiative with good intentions but one that doesn’t help refugees become self-sufficient. The program offers vocational internship programs that are meant to train people to enter the workforce.

“They’re just doing volunteer work for a non-profit somewhere, they’re not learning anything, they’re not building them to be employable,” Kothor said.
Catholic Family Center’s Beshir said his non-profit and City Hall have enjoyed a good relationship, but added that Rochester needs a direct line of communication between the refugee community and policymakers.

“Having a voice in the City Council, or direct communication with the Mayor’s
Office, is important in shaping up some of the benefits and policies to make it better for the newcomers who are in our community,” Beshir said.

He pointed to language barriers as a top issue, both for refugees and city employees with whom they interact, and used police officers as an example. In many cultures, he said, it is standard upon being pulled over by police to exit the car and approach the officer. In the United States, that is an unwise thing to do.

Just as refugees should have easy access to services that help them learn English, he said, civil servants should be made more aware that there are newcomers to the city who may not know American customs.

“We should be training the police, the teachers, and other city service providers in cultural sensitivity,” Beshir said. “Some of them don’t know that we have a large number of new Americans in the city, and they need some kind of training in order to be able to easily communicate with newcomers and help them.” 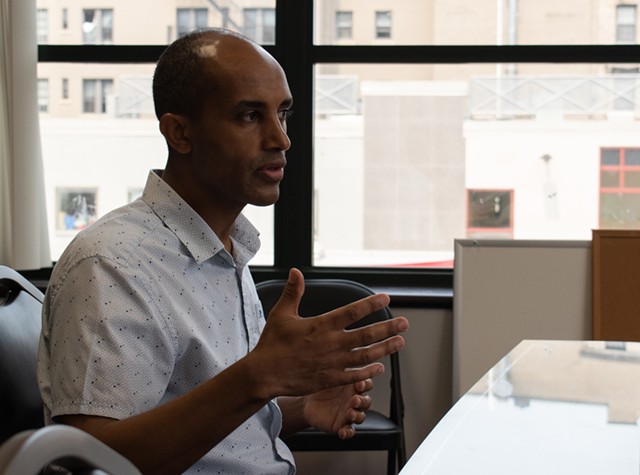 Agency leaders also emphasized that issues such as poverty, lack of jobs, and violence are compounded for refugees. Their communities can be insular, they may have an inherent distrust of government due to their experiences in their home countries, and they may be more susceptible to becoming targets of criminals in their neighborhoods because of their race or style of dress.

Several years ago, Khadka was punched in the back of his head and robbed of his bus pass. In 2014, three men beat and robbed his father as he walked along Lake Avenue. His brother, his uncle, and just about everyone he knew had a similar story.

It’s a tale Kothor has seen play out time and time again.

“The Burmese and Nepali, I think they are a target because they are more noticeable, whereas someone like me and the African immigrants, they’re not noticeable until you open your mouth and people know you’re not from around here, you weren’t born here,” Kothor said. “But African immigrants do have that same issue, especially in schools where they’re bullied.”

He recalled speaking with one refugee in Rochester who longed to be somewhere other than here.

“One person came to me and asked, ‘Well, why would you want to stay here?’” Kothor said. “I had a hard time trying to convince him why he should stay.”