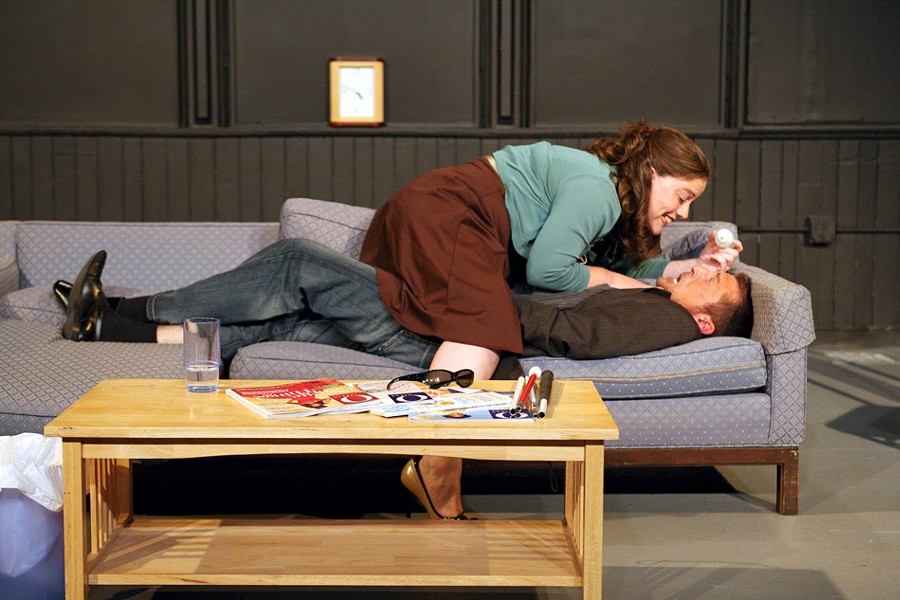 One of the rules of Hollywood romantic-comedy has always been that "the boy" and "the girl" have got to "meet cute." This weekend at RAPA, they will, three times over. The occasion is the latest production of Screen Plays: a triple bill of contemporary romantic comedies tied together by a theme.

"It's all about introductions," says director Karen Tuccio. It's about "how people meet for the first time, and how they react to one another." In each of the three one-act plays, a man and a women meet for the first time under various circumstances. In "Stage Kiss," by Michael Kramer, they're actors awkwardly matched together at an audition for a play. In Samara Suskind's "Blind Date," they've met by intention, on, well, a blind date. And in "Exit Row," by local writer Louie Podlaski, they're forced to meet while seated next to one another on an airplane.

Screen Plays successfully produced "Exit Row" last year at MuCCC, with Tuccio directing actors Katie Keating as "the girl" and James Heath as "the boy." Keating and Heather had worked together before, and continued to demonstrate an onstage chemistry together in "Exit Row," which made Tuccio think of showcasing their talents in a couple of other short plays to make a full evening's entertainment. Tuccio says she selected the other two plays to weave in the central theme of "introductions," and how people react when meeting someone for the first time in diverse settings."

"I call them the dynamic duo," the director says of Keating and Heath. "They're the two hardest-working actors I've ever worked with in 12 years working in theater. They trust each other and they trust me as a director, and that kind of symmetry is unique. They always go the extra step."

This triple bill of short romantic comedies — there's no overarching title, just the names of the three plays — is presented by Screen Plays, a theater company Tuccio began several years ago. She was inspired to do it not only because of her love of theater, naturally enough, but also by her love of the silver screen.

"I just love the feeling you get from watching many of the movies from Hollywood's Golden Age," she says. "They have classic messages about helping each other through problems and a generosity of spirit."

Tuccio also notes that many of the films present interesting, powerful female characters. "The best of those movies leave me amazed and uplifted, and I wanted to produce shows that did that as well."

With Screen Plays, Tuccio decided to produce plays — some famous, some forgotten — that had been made into popular "golden age" Hollywood features. She began in 2012 with "Desk Set," a 1950's comedy that was made into a Spencer Tracy-Katharine Hepburn movie. Screen Plays continued the next year with "Parfumerie," a Hungarian comedy from the 1930's that became "The Little Shop on the Corner" with James Stewart and Margaret Sullavan. This December brings Kaufman and Hart's classic, "The Man who Came to Dinner," also filmed in the 1930's with Monty Woolley and Bette Davis, and directed for Screen Plays by Jean Gordon Ryon.

"Stage Kiss," "Blind Date," and "Exit Row" have yet to be seen at a movie theater near you, but Tuccio thinks these romantic comedies share some of the golden-age aura of their classic predecessors. "All three are comical, heartwarming looks at meeting someone for the first time."

Tuccio says she has another ambition for Screen Plays, and this new production falls into that category: promoting local playwrights like Podlaski and other local theatrical talents like Keating and Heath. She hopes that this will grow into an annual summer series.

One aspect of this production is definitely 21st-century: Tuccio is exploiting social media at the performance. "We'll be encouraging the audience to participate in a fun, interactive social media sharing. I will have a 'Kiss Wall' where people can plant a kiss on a heart shaped note, sign it and post it on Twitter at #stagekiss. To tie in Hollywood's Golden Age, we placed images of vintage film posters which have the word 'Kiss' in their title. We will keep all the posted kisses on a wall in the shape of a heart."

EDITOR'S NOTE: This story has been corrected to reflect the proper authors of two of the plays. Michael Kramer wrote "Stage Kiss," and Samara Suskind wrote "Blind Date."