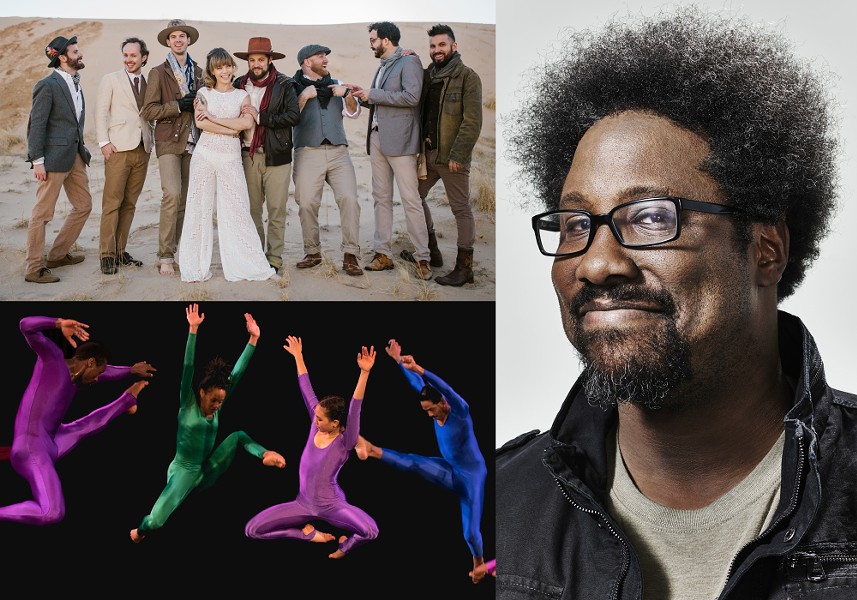 No two events are the same in the forthcoming season at the Nazareth College Arts Center. The 2019-20 season boasts a variety of entertainers from many different artistic disciplines, and with a wide swathe of cultural perspectives.

Among the highlights are three performances worth marking your calendars in advance. On October 24, the singular, energetic jazz-soul band Mwenso & the Shakes presents the multimedia concert “Harlem 100: Celebrating the 100th anniversary of the Harlem Renaissance,” featuring the music of legends such as Duke Ellington, Billie Holiday, and Fats Waller. On November 23, Los Angeles band The Dustbowl Revival returns to Rochester with its crowd-pleasing blend of Americana, soul, and rock, following a triumphant performance at the 2018 Rochester International Jazz Festival. Comedian and author W. Kamau Bell arrives on January 17. Host of the CNN series “United Shades of America,” Bell brings his poignant and culturally relevant humor in the one-man show “The W. Kamau Bell Curve: Ending Racism in About an Hour.”

There’s definitely a healthy dose of music in the 2019-20 season, including: the Latin American-folk-pop melange of singer-songwriter Gina Chavez (October 5); the unrelenting taiko-drumming style of the Japanese ensemble Yamato (February 8); and the refined intensity of the Calidore String Quartet (April 4).

There’s also plenty of family-friendly entertainment: a wildlife show with Peter Gros from TV’s “Wild Kingdom” (October 19), as well as three different theater productions based on popular children’s books — “Angelina Ballerina: The Very Merry Holiday Musical” on November 30, the puppetry presentation “The Rainbow Fish” on February 15, and “The Magic Schoolbus ‘Lost in the Solar System’” on May 2.

Below is the complete 2019-20 season at Nazareth College Arts Center. More information can be found at artscenter.naz.edu/season.

Thursday, October 24, 7:30 p.m. in Callahan Theater
“Harlem 100: Celebrating the 100th anniversary of the Harlem Renaissance”
Hosted by Michael Mwenso and the Shakes
$28-$40