PHOTO BY MAX SCHULTE As CSX locomotive passes over High Falls in the city of Rochester. Tankers full of crude oil and liquid propane already pass through Monroe County on a regular basis and trains hauling liquefied natural gas could soon join them.
Rochester and its suburbs could be in the path of a new wave of so-called “bomb trains” — engines pulling strings of tankers laden with highly combustible fuel that could explode in the event of a derailment — due to a recent federal rule allowing liquefied natural gas to be transported by rail.

While natural gas is extremely flammable, it is not explosive in its liquid state. But spilled liquefied natural gas, or LNG, evaporates rapidly, forming a highly-combustible vapor that, if ignited, could be disastrous.

A devastating explosion that occurred at a liquefied natural gas plant in Cleveland, Ohio, in 1944 when a full storage tank burst killed 128 people, injured 225, and scorched some 30 acres of land. Advances in cold-storage technology since then have significantly reduced the likelihood of a similar incident, according to experts, and liquefied natural gas has been shipped on water by container ships for decades without any major incident. 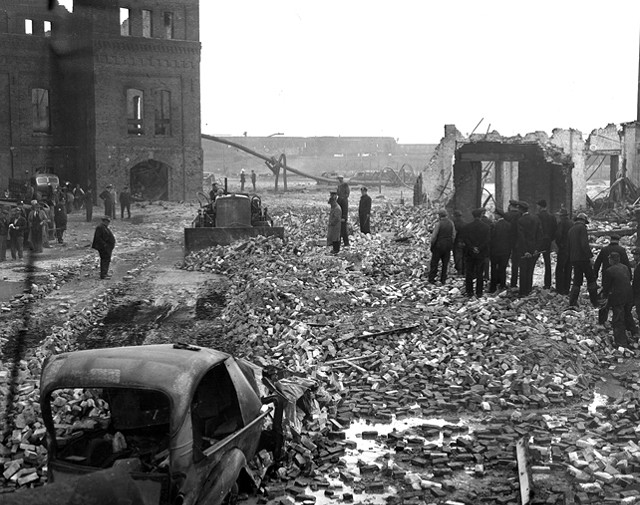 But the prospect of a derailment of a liquefied natural gas shipment by train has raised concerns among transportation and fire safety authorities. The National Transportation Safety Board and the National Association of State Fire Marshals both objected to the new regulation.

The rule, which faces several legal challenges, clears the way for trains to carry up to 100 tankers of liquefied natural gas on American railroads, as long as the gas is stored in a specifically-designed tanker whose safety record in hauling LNG is largely untested.

An American Association of Railroads spokesperson said that liquefied natural gas isn’t being shipped in bulk under the new rule because the necessary tankers haven’t been built yet. She said a long lead time is needed to manufacture them and that they cost between $650,000 and $750,000 apiece. Railroads don’t own the cars, shippers have to buy or lease them, she added.

But the Rochester Fire Department, which leads the hazardous materials response for Monroe County, has been warned that trains hauling liquefied natural gas are coming to the area.

“We know it's there, we know it's moving through the region,” said Jamie Renner, lieutenant of special operations at RFD. “It's on our radar but it's not on the top of the list for what we lose sleep over." That spot, he added, is reserved for toxic industrial chemicals.

In response to an inquiry, a CSX spokesperson Cindy Schild told CITY that its two main rail lines in Rochester aren’t currently being used to transport liquefied natural gas. She declined to speculate as to when LNG trains could be expected here, saying only that the company is “currently evaluating the potential market opportunity of the new rule.”

In general, there is little public transparency around what trains haul through any given area at any given time.


A MATTER OF TIME

Even if trains laden with liquefied natural gas aren’t coming through Rochester now, there’s reason to believe they might.

Rochester is on a rail line already used to transport other fossil fuels, including volatile crude oil. Shipments of crude oil have skyrocketed since 2010, in light of a dearth of pipelines connecting the oil-rich Bakken Shale region of Montana and North Dakota to the rest of the country.

It was an unattended train carrying crude oil whose derailment reduced a half-mile swath of the tiny Quebec town of Lac-Megantic to embers. The fire from that explosion killed 47 people and consumed 30 buildings.

A major CSX crude oil train line cuts through Monroe County, including the city of Rochester. The railways connect crude from the Bakken formation to a terminal at the Port of Albany as well as terminals and refineries in New Jersey and Pennsylvania. The same line is used to transport tank cars of liquefied propane across the Northeast.

“We would expect to see a lot of demand for rail-based transportation of LNG in the Northeast where it may be politically difficult to build new pipelines,” said Jordan Luebkemann, an attorney with the environmental group Earthjustice, which is part of a lawsuit seeking to overturn the rule. “I see this as an end run around the popular and political opposition to building new pipelines.”

In its objections to the rule sent to the federal Department of Transportation, Earthjustice said that an LNG spill could potentially level an entire city.

Leading the litigation to roll back the rule are 14 states, including New York, as well as the District of Columbia. They argue that the rule is unlawful under the Hazardous Materials Transportation Act, which was signed in 1975 by President Gerald Ford.

The CSX oil train route that passes through Rochester crosses gas producing regions of Ohio, West Virginia, and Pennsylvania before cutting through Monroe County and continuing east to Albany, which is connected by other rail lines to major New England markets.


Natural gas suppliers and large consumers such as utility companies claim that interstate pipeline bottlenecks prevent them from meeting growing demand in downstate New York and parts of New England. They blame the bottlenecks on New York regulators, who have blocked pipeline projects that would boost natural gas supplies to those regions.

Presently, New York is heavily dependent on natural gas. In 2018, the fuel was used to generate roughly 35 percent of electricity consumed in the state, according to data from the federal Energy Information Administration. The state had 4.5 million residential natural gas consumers in 2019, a 2-percent increase from 2014.

But state officials and regulators, with urging from environmental and social justice groups, have taken steps to transition the state away from natural gas and other fossil fuels. A 2019 state law set an aggressive goal for New York to reduce its carbon emissions to at least 85 percent below 1990 levels by 2050. It also calls for 70 percent of energy consumed in the state to come from renewable sources by 2040.

State regulators recently rejected a downstate natural gas pipeline proposal partly on the grounds that it was in conflict with the state’s energy and emissions goals. They also cited its potential to degrade water quality, a justification they’d used to nix other pipeline proposals over the past few years.

Although natural gas is a cleaner fuel than coal or oil, it is still a fossil fuel that contributes to climate change and, for that reason, its use needs to end as quickly as possible, said Abby McHugh-Grifa, executive director of the Rochester People’s Climate Coalition, which in late October changed its name to the Climate Solutions Accelerator of the Genesee-Finger Lakes Region.

“I do personally find the bomb train idea alarming,” McHugh-Grifa said. “But in the scheme of things, what I find even more alarming is that we are continuing to contribute to the problem of climate change which has much greater implications over both the short and long term for our communities.”

The new federal rule stems from an April 2019 executive order from President Donald Trump which called for federal agencies to rewrite rules to allow trains to haul liquefied natural gas in bulk.

The DCReport.org, a Trump administration watchdog media outlet founded by Rochester-based journalist David Cay Johnston, reported that the regulation financially benefits an energy company founded by Wes Edens, the co-founder of the Fortress Investment Group hedge fund that helped loan the Trump Organization $130 to build the Trump International Hotel and Tower in Chicago in 2005.

Until now, there have only been a few places around the country where trains have been allowed to carry liquefied natural gas, and, as the NTSB noted in its objections to the rule, that was only under a special permit from the Pipeline and Hazardous Materials Safety Administration and with a tank that met Federal Railroad Administration approval.

Opponents have criticized the agencies responsible for drafting and finalizing the regulation — namely the Department of Transportation and the Pipeline and Hazardous Materials Safety Administration — for moving too quickly and not doing enough to ensure that transporting liquefied natural gas by rail is indeed safe.

For instance, the NTSB pointed out in its objections that “there is scant accident data” on the tank car proposed to carry LNG in bulk — a car known as DOT-113 — and called for a “thorough safety assessment” of the car.

“Until such time as the risks associated with transporting large numbers of LNG tank cars in a single train are better understood, the NTSB strongly suggests that PHMSA use this rulemaking opportunity to implement operational controls similar to the protections currently in place for high-hazard flammable trains,” the NTSB chairman, Robert Sumwalt, wrote in his objections to the rule late last year. “We believe the risks of catastrophic LNG releases in accidents is too great not to have operational controls in place before large blocks of tank cars and unit trains proliferate.”

Environmental groups, the International Association of Firefighters (IAFF) union, and attorneys general from the more than a dozen states suing the federal government also argue that transporting vast amounts of a volatile fossil fuel, particularly through cities and other populated areas, is inherently risky.

“It is nearly certain any accident involving a train consisting of multiple rail cars loaded with LNG will place vast numbers of the public at risk while fully depleting all local emergency response forces,” read comments submitted by the IAFF during the rule’s review period.

If a natural gas train passing through the Rochester area were to derail and ignite, it would be an all-hands-on-deck scenario for emergency crews across Monroe County, just as it would for a train carrying crude oil or another hazardous substance, said Renner, the RFD lieutenant said.

The Rochester Fire Department is “able to handle pretty much anything that’s thrown at us.” Renner said.

The liquefied natural gas accident that devastated Cleveland in 1944 occurred after the gas leaked from the storage tank into sewer lines. Multiple explosions occurred over a square mile and flames reaching 2,800 feet high reportedly licked the sky.

“It was as if a flame-thrower had been turned on you,” one man who witnessed the devastation and survived told the local newspaper.