The National Women's Hall of Fame in Seneca Falls has already inducted more than 280 women for their achievements, but leadership felt that more needs to be done to represent women from diverse backgrounds, and to that end, they started a series of virtual inductions on Thursday, recognizing six Black women posthumously, including individuals like Toni Morrison, Henrietta Lacks, and Aretha Franklin.

Lacks died in 1951 at the age of 31. Doctors used her cancerous tissue to achieve numerous research breakthroughs — including vaccines for polio and HPV. Jeri Lacks is the granddaughter of Henrietta Lacks. She was a guest on WXXI's Connections with Evan Dawson talk show earlier on Thursday and said that the induction of her grandmother into the National Women’s Hall of Fame is a great honor, and highlights the ongoing need to address disparities.

"More work needs to be done because a lot of people still don’t know her story. And that’s why our family is going to continue to tell her story, continue to educate people about her story, and talk about social justice, talk about health disparity," Jeri Lacks said. 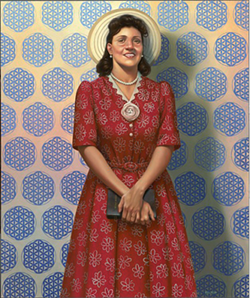 A keynote speaker and "inductee ambassador" on Thursday night was activist Angela Davis, who noted this is the centennial of the 19th Amendment that helped secure the right to vote for women, but not all of them, since many Black women were disenfranchised until the Voting Rights Act of 1965.

"When the 19th Amendment is celebrated today, it is too often only white women who are recognized for their achievements despite the fact that many women of color fought for this right as well," Davis said.

Dr. Deborah Turner is president of the League of Women Voters, and she talked about the presidential election this year, which saw a woman of color, Kamala Harris, become the Vice President-elect.

"Millions of voters, the majority of whom are women, are celebrating this year because they proved that America still believes in democracy, and the importance of letting every voice be elevated against all odds, even in this year of COVID," Turner said.

The National Women's Hall of Fame plans to hold future events as part of this virtual induction series to recognized marginalized women of achievement. Future inductees will include prominent Latinx, Indigenous, Asian American, and LGBTQ women.