by David Andreatta and Rebecca Rafferty

PHOTO BY JACOB WALSH
The statue of a pensive Nathaniel Rochester in Nathaniel Square Park in the South Wedge has been defaced.

His hands have been painted blood red, “SHAME” is stenciled across his forehead, and his back has been tagged with “WHITE SUPREMACY.”

That Rochester, a major in a Revolutionary War militia and the founder of the settlement that became Rochester, was a slave owner and trader has been well documented.

The statue, by the renowned sculptor Pepsy Kettavong, is called “Reflecting,” and has Rochester sitting, with his chin resting on hands clasped around the nub of a walking stick. His top hat, which is now spray-painted with “JERK,” sits nearby.

Kettavong, who sculpted the piece in 2007, said in an interview Friday with CITY that he was aware of Rochester’s history in the slave trade when he created the work, and that he took pains to avoid glorifying him.


“The design of the sculpture is not meant to glorify Nathaniel Rochester, but to portray him as a man who is reflective, to acknowledge but do it in a way that the audience, the present and future audience, questions our own actions,” Kettavong said.

Unlike many monuments to historic figures, Rochester is not on a pedestal, but rather at ground-level and sitting.


“On a huge pedestal on a column or something you look up to as like a godlike figure," he added. "In my design, it's not a god. It's about humanizing the character. But the way he's sitting there, he's leaning on a cane and looks like a weak man. He's reflecting. It’s a totally different experience.”

Of the defacement, Kettavong said:  “I felt that it was short sighted.” 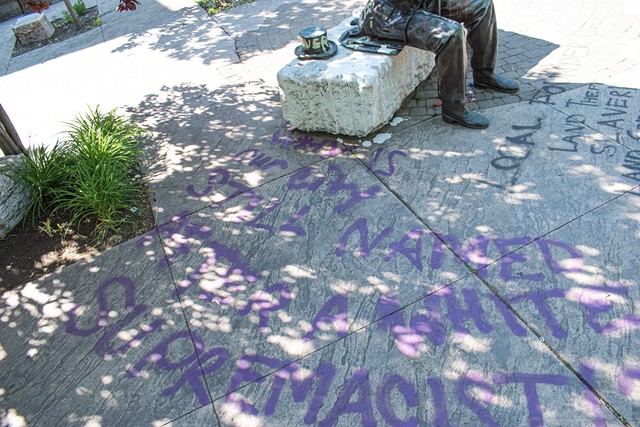 The vandalism appears to have occurred in the last day or two, in the midst of nationwide unrest over racial injustice and on the eve of Juneteenth, the commemoration of black slaves in Texas learning that they had been freed.


In light of the confluence of all these events, CITY on Friday republished a previous cover story, “Portrait of A Slave Trader: Confronting the Real Nathaniel Rochester,” by Ron Netsky.

First published on February 11, 2004, the piece delves into Rochester’s legacy and his place in the region’s history.

Asked about the vandalism Friday at a morning news conference, Mayor Lovely Warren said she understood Rochester's historical significance as the founder of what was in his day known as Rochesterville.

"It is also my understanding that he was a slave owner," Warren said. "That's something we have to talk about as a community and what would be the best way to deal with those figures."

To that end, the mayor added, the new Commission on Racial and Structural Equity that she and Monroe County Executive Adam Bello announced a day earlier could facilitate those conversations.

Includes reporting from James Brown of WXXI News, a media partner of CITY.