Namaste for a drink

The shirts started as a joke, really. Certified yoga instructor Nicole Kazimer loves her occupation as much as she loves champagne, so her boyfriend (a graphic designer) suggested they combine the two interests and add to the apparel line for Kazimer's business, HelloYogaGirl. They emblazoned long-sleeved, gray jersey shirts with "Yoga and Champagne" in large, gold typeface. Local screen printer Tiny Fish Printing produced a small batch of 50 shirts, and they sold out within four days. Kazimer realized they might be on to something.

A few weeks later, in November 2015, Kazimer was having lunch with friends Cameron Phelps and Frank Cooper Morehouse, two of the bartenders behind Flower City Drinksmiths, which holds craft cocktail classes. The shirt came up in conversation, and an idea was born. Kazimer had been holding her Hikyoga classes, which combine hiking and yoga, outdoors all summer — but now it was too cold.

"In the winter, obviously we couldn't go on the trails outside in Rochester," she says. "So the guys came up with the idea for a cocktails and yoga class."

Four sold-out classes were held at Ox and Stone on Alexander Street, and the demographic, unsurprisingly, was females in their mid-20's through 50's. "I think women really enjoy this, because it's just sort of that 'Sunday funday' where you can get out of the house and bring your girlfriends," Kazimer says. "It's the new brunch."

It's not an entirely original idea: combining yoga and beer has been a trend in bigger cities for a few years now. The New York Times wrote about yoga and beer classes in June 2014, pointing to Beth Cosi of Charleston, South Carolina, as the first yoga instructor to popularize the pairing (she now runs a program called Bendy Brewski Yoga). And in July 2015, People.com called it "the hottest new fitness trend." Kazimer is the first in Rochester to combine spirits and yoga, but there are other groups in the city who offer beer and yoga pairings.

The base of the cocktails is champagne (to stick with the apparel branding), and each three-hour class begins with mingling time, complete with charcuterie, cheese and fruit boards, and punchbowls. Then, the group of 50 is split into two groups: while the Drinksmiths teach 25 attendees how to make two different drinks, the other 25 start yoga with Kazimer. After 30 minutes, the groups switch. This happens twice — and the finished cocktails are simply placed on each person's yoga mat for a little buzzy Namaste. Because the event sells out every time, there's more on the docket for this summer. (They're also taking the class on the road to host a few in Buffalo).

Many of the attendees are repeat customers who bring new friends the next time they attend. And many of them have never done yoga, which is part of Kazimer's primary goal. She removes the pressure and stress of a studio environment so attendees don't need to worry about knowing how to pose, what to wear, or being judged. "This is such a laidback environment," she says. "You can socialize and take sips of your cocktail in a balancing pose while you're doing yoga. I just like seeing people happy when they leave"

For those who aren't into craft cocktails, there are other alternatives. Kazimer also started a "Yoga and Chill" class at Makers Gallery and Studio on Saturday mornings — an hour-long yoga class that includes Fuego coffee and a handcrafted doughnut from Roc Donut King in the ticket price. 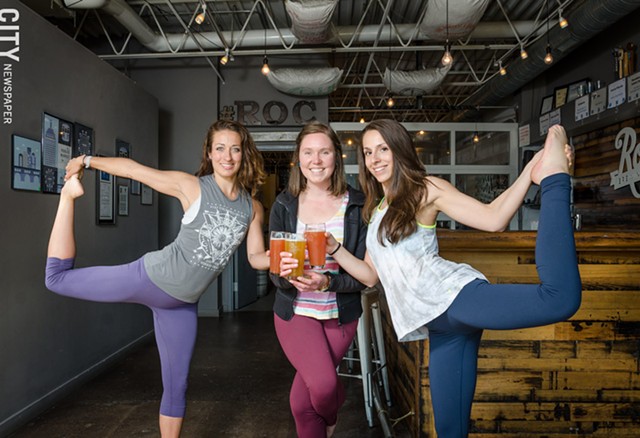 Carolyn Stiles, who founded Rochester Beer Gals in fall 2014, moved back to Rochester after living in Denver for a few years. She was involved in the huge beer scene there, so was eager to recreate that community in her native city. The Rochester Beer Gals events, which happen once a month, are focused on combining social and educational components.

"We want to widen the horizons of people who already like beer," Stiles says. "When you pair beer with an activity, you're experiencing craft beer in a different way. It's a new exploration, regardless if you've tasted the beer before."

In January, local Pilates instructor Hannah Zimmerman approached Stiles about starting a collaborative series called "Ales and Ohms," a yoga and Pilates class held in a local brewery. The young women then connected with Roc Brewing Co. on South Union Street in downtown Rochester, since the venue is centrally located and well lit, and it also gave the opportunity for tours of the brewing space before the class. Both of the "Ales and Ohms" classes sold out.

"These events tend to attract the same type of person," Stiles says. "Someone who is really into yoga is often going to be into beer — both of those things tend to be really laidback and chill." She also attributes the event's success to a general openness toward collaborative, crossover activities. Rochester Beer Gals will continue to hold beer and yoga classes, but the group plans to venture into other spaces as the weather warms (breweries with patios, especially). It'll also diversify the types of classes offered this summer.

"We don't want to be perceived as just a yoga and beer group," Stiles says. "It's more like 'activity and beer' — fun experiences paired with beer. That could mean a run and beer, or hiking and canoeing followed by a beer tasting. We want to be accessible to everyone."