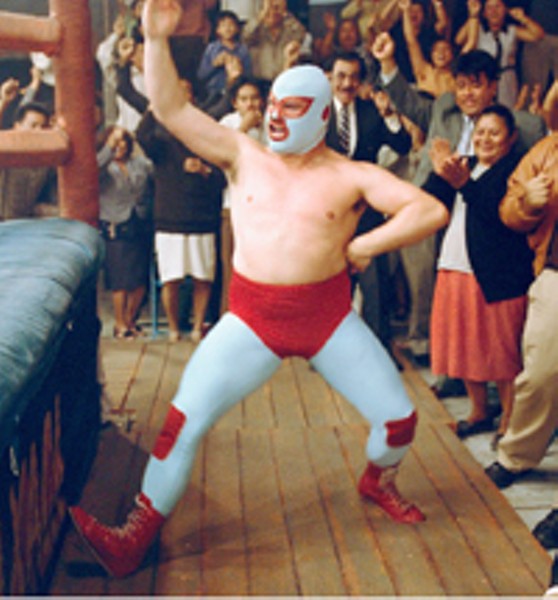 Paramount Pictures Stupid con queso: Not even the giggle-worthy combo of Jack Black and spandex can milk laughs out of "Libre."

Since no one else seems to want to step up, I guess I'll do it: Mexico, I'm so sorry. It's bad enough that many politicians are plotting to criminalize those of Mexican descent trying to make better lives for themselves in this land of opportunity. (Isn't that the dream that brought most of our ancestors here? Are we full?) But the left hook in the insulting one-two punch against our amigos directly to the south must surely be Nacho Libre, director Jared Hess' startlingly unfunny follow-up to lame-flick-turned-cultural-touchstone Napoleon Dynamite.

Shot mostly in southern Mexico's majestic state of Oaxaca, Nacho Libre stars Jack Black in a Frodo wig as Ignacio, a monastery cook growing ever more vexed by the gruel he's forced to serve to the salad-coveting urchins who live at the monastery's orphanage. A wish for fresh-food funding causes him to consider becoming a luchador, one of those masked wrestlers who grapple with other mystery men in hopes of pocketing pesos. And if his dynamic new career impresses the recently arrived nun (!) Sister Encarnación (Mexican soap star Ana de la Reguera, resembling Penélope Cruz minus the grotesque), then bueno.

But Ignacio's nesting-doll body isn't exactly conducive to athletic prowess, so for some reason he enlists the help of a mossy-toothed collection of bones called Esqueleto (HéctorJiménez), and together Ignacio --- wrestling moniker: Nacho --- and Esqueleto embark on the LuchaLibre circuit, getting their clocks cleaned by old guys, women, and midgets, but never coming away with empty pockets. Naturally, all roads lead to Ramses, LuchaLibre champ and orphan-ignorer. It's like Rocky with cacti! Except boring.

Love Jack Black or hate him, you've got to be in awe of his complete lack of vanity as he tosses his doughy, spandex-stretching self all over the place with an abandon not seen since Chris Farley. So it's a shame that the script --- a collaboration between Hess, his wife Jerusha, and the usually reliable Mike White (School of Rock) --- isn't worthy of Black's talents. It's only when Black is allowed to be Black --- i.e., those absurdly unmistakable songs --- that Nacho Libre comes alive. The remainder of the film relies on tired fart jokes, mildly offensive Mexican caricatures, and mean-spirited ridicule of the ugly and the fat.

That blasé cruelty is the exact same reason I hated --- h-a-t-e-d --- Napoleon Dynamite. The optimist in me, however, had high hopes for Nacho Libre, crossing my fingers that Jared Hess could harness the power of Jack Black and redeem himself. But Hess should actually fall to his knees and thank his god that I'm not in charge of some governing body that levies fines for cinematic transgressions (using the indispensable Peter Stormare in merely that eagle-egg scene would bankrupt him). And I should probably just be thankful that Hess didn't allow an eaglet to emerge from the egg for a clichéd chomp on Black's nose. Though secretly, I would have liked that.