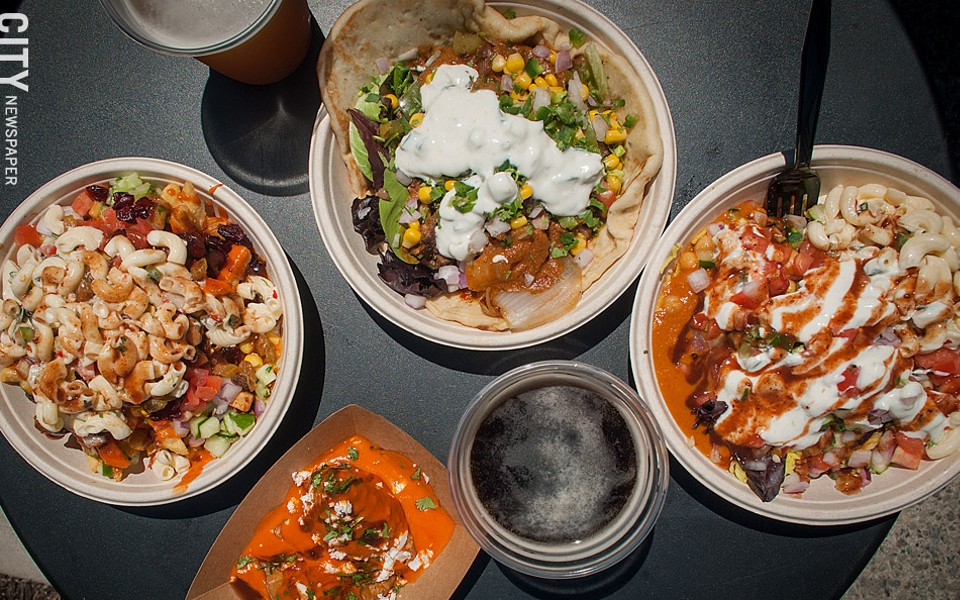 For nearly two decades, the Singh family has been serving up traditional Indian cuisine to Rochestarians at Thali of India. In February, brothers Ajay and Aman Singh branched out, opening Naan-Tastic to cater to diners' desire to eat quickly and be able to customize their meals.

Naan-Tastic brings the familiarity of other fast-casual restaurants, like Moe's, Subway, or Chipotle to Indian cuisine. If you're new to Indian food, descriptions of the various options -- bowls, rolls, or Naan-tacos ($7.99-$8.99) -- and the traditional spices used in Indian cooking (saffron, garam masala, ginger, cardamom and coriander) helpfully adorn the walls.

Located near Marketplace Mall, the space boasts both indoor and outdoor seating for about 80 to 100 people. Inside, the colorfully painted walls are punctuated by wood paneling and tables, and black pipe light fixtures. It offers a comfortable, fun, and trendy vibe for anyone looking to get a quick meal -- whether you eat in or take it to go.

When you step up to the counter, the helpful staff will guide you through your choice of meat, rice, veggies and sauces made with traditional, warming Indian spices that taste like they have been simmering for days to develop such a rich flavor.

My bowl, which I packed with bright yellow jasmine rice, tender chicken tikka and thick Slammin' Masala sauce, was delightfully warming (even if it was 85 degrees outside). It's the kind of spice so synonymous with Indian cooking -- not necessary burn-your-taste buds-off spicy, but rather the kind of spice that tickles your taste buds and warms you from the inside out. The masala sauce is rich and bold in flavor. Garam masala takes the lead here, but other spices, like turmeric and ginger, join in harmoniously in the dance as if it were choreographed by a master. The corn, cucumber, and tomatoes I opted to put on top added a needed freshness for my palate to balance the spices in the dish.

Another refreshing oasis to the meal came at the recommendation of the staff: a mango lassi ($3.49). The thick drink is somewhere between a milkshake and a smoothie, and combines mangos, milk, yogurt, and cardamom into a velvety smooth texture that goes down oh-so-easily.

I also ordered a Naan-taco, which was overstuffed with Chana Masala (mildly spiced garbanzo beans), jasmine rice, grilled peppers and onions, and their Makhani sauce -- Makhani is a ubiquitous tomato-based sauce in Indian fare, but theirs is also named for their father, Makhan Singh. It was a messy, two-handed operation, but worth it for the sweet and slightly spicy sauce.

Not only did Ajay and Aman name a sauce after their father, but nearly all of the recipes are inspired by those of their father, who spent a lifetime perfecting the intricate flavors in each dish. They hope by honoring tradition, and adding convenience, they will help a new audience fall in love with the food they grew up eating.

EDITOR'S NOTE: This article has been updated to reflect that Makhani sauce is a standard offering in Indian fare, though Naan-Tastic's version is named for the Singh brothers' father.