‘Mystery Science Theater 3000’ arrives in Rochester, with a lifelong fan as the lead 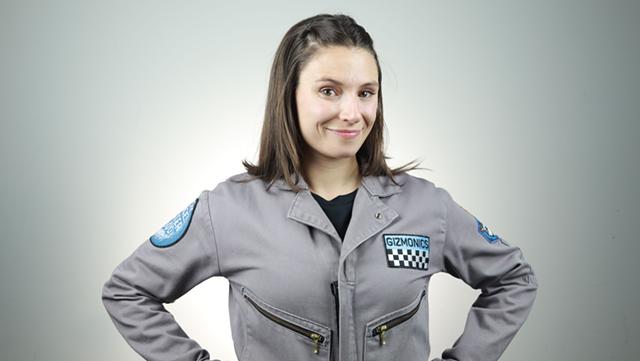 Emily Marsh knows how to nail a job interview. The problem, as she was interviewing with Joel Hodgson, the creator of the cult classic television show “Mystery Science Theater 3000,” was how to stand out from the many, many, many other singing puppeteers who would be sucking up to Hodgson.

The adrenaline was surging, Marsh says. And inspiration struck.

“Joel, the show has meant so much to me growing up,” she says she told Hodgson. “My dad, my brother. But my mom, I’ve got to be honest, on the other hand,” she pauses for dramatic effect. “When I told her I was auditioning for this, said, ‘That show got a national tour?’”

Indeed, it did. In fact, four of them, to date. The latest, the "Time Bubble Tour,” comes to Rochester’s Auditorium Theatre Saturday, Nov. 6, at 8 p.m.

And there’s an additional surprise for mom. Her daughter the puppeteer is not only the central character of the touring theatrical version, but as the television show returns for its 13th season, she’s playing the role of the trapped-in-space test subject forced to watch cheesy B movies.

The loyal fans of “Mystery Science Theater 3000” can take a quick bathroom break for the next six paragraphs while we explain the concept to those unfamiliar with the show.

It originated in 1988 on Minneapolis TV, with Hodgson playing a janitor on the Earth-orbiting Satellite of Love, imprisoned by a pair of mad scientists who are measuring the effects that really bad movies have on the human brain. With breaks for comedy bits, the silhouettes of Hodgson and three puppets — the robots Tom Servo, Crow T. Robot and GPC (known as Gypsy back then) — can be seen sitting in front of a film as they make sarcastic comments.

Droll criticisms abound, such as this from Hodgson during the lampooning of “Manos: The Hands of Fate,” a classic in MST3K lore: “Every frame of this movie looks like someone’s last known photograph.”

Over the years, the broadcast orbit of “Mystery Science Theater 3000” reached The Comedy Channel, which became Comedy Central, before moving on to The Sci-Fi Channel (now known as SyFy).

Undeniably questionable as its source material may be (the writer, director, producer and star of “Manos” claimed that it was the worst film ever made), “Mystery Science Theater 3000” was nominated for Emmy Awards and CableACE Awards, and won a Peabody Award in 1993. “TV Guide” referred to MST3K as one of the all-time great cult TV shows, and Time called it one of the 100 Best TV Shows of All Time.

Then the sarcasm went silent: The show was canceled in 1999, and lay dormant.

Until the miracle of crowdfunding. Fans of the show contributed almost $6 million through Kickstarter — the largest fundraising effort ever by the on-line platform for a film or television show. That allowed for MST3K’s 2017 revival on Netflix for two seasons. And now, yet another Kickstarter campaign — this time raising $6.5 million — has given the show the promise of new life; it will be broadcast through an online platform called Gizmoplex. Marsh will appear on five of those new shows.

With “The Time Bubble Tour” celebration of mediocrity now on the road, I called Marsh, who was holed up in the obscurity of a hotel room in York, Pennsylvania.

“I think the appeal of the show is that, well, there is this desire to watch bad movies,” she says, searching for an answer that doesn’t sound like admitting guilt to a crime. “Which, now that I think about, that’s something I’ve always just been, always just had a draw to. Like just the other day, I was watching something terrible with a friend — ‘We have to watch this, it’s soooo bad.’ And at the end of it they just turned to me and said, ‘That was really bad, why are we watching this?’”

The answer: “It’s so bad it’s hilarious, so I think that impulse is there.” Marsh says.

And who can resist, while watching a really bad movie with friends, the urge to make sarcastic comments?

“Adding this layer to it of, if your friends are these brilliant comedians,” she says. “And it just elevates the whole thing.”

Sarcasm was spoken in the Marsh household while she growing up in Virginia, where there are “more dead people than alive people in Arlington County,” Marsh says. The charms of Arlington National Cemetery aside, when Mom left the house, Dad would make cheesy eggs and he and his daughter would watch “Mystery Science Theatre 3000” together. Real, if unusual, father-daughter bonding.

In college, Marsh studied acting and puppeteering, if “studied” is the right word there. Probably not. Most people don’t study puppets, they play with them. During her senior year, Marsh worked on “Avenue Q,” the Tony Award-winning musical comedy with a cast that included humans and puppets.

Puppeteering is indeed a career. “It turns out you get one job in puppeteering,” she says, “and then there’s no going back.”

So Marsh figured it was just another humans-meet-puppets gig in the summer of 2019 when she interviewed with Hodgson for the MST3K tour.

She got the job without realizing she’d be playing a live person and not a puppet. “And I looked at the script and went… ‘I don’t think I have a puppet… wait… what’s going on?’” she says.

Too late. But how could she not know? Because, she says, during the interview Hodgson never said what the job actually was. And Marsh was so eager to land the gig, she never asked.

Marsh is the fourth actor in the role of a human trapped on the Satellite of Love. The first woman, too. And she plays off the robots a little differently than the guys did. They were the parent figures. Crow, Tom Servo, and GPC were in need of adult guidance.

But as Marsh sees her dynamic with the characters differently. “The bots almost need to take care of her a little bit,” she says. “Which, you know, dysfunction. Dysfunction rises, because those guys should not be taking care of anybody.”

She’s playing it with the naiveté of anyone thrown into an unexpected situation, be it stranded on a satellite in space or in thrown in front of a television camera.

“Which fits the reality of the situation a lot,” Marsh says. “Where I grew up with the show and then didn’t expect to be a host on the show, and then all of a sudden, ‘Wait, I’m on the SOL, what’s going on?

“What’s going on?” she says again. “Art mirroring life in that way.”

The touring show does differ a bit from the televised version. The silhouettes sitting in theater seats in front of the film have been replaced by Marsh and the bots sitting at a desk to the right of the stage. That’s so the audience sees for itself that they are not a pre-recorded bit. It’s Marsh and the live robots.

Live robots. Is that a thing?

And then there’s the movie itself that they’ll be watching:. “Making Contact.”

“It’s quite dreadful,” Marsh says. As a bonus, among the film’s characters is an evil ventriloquist’s dummy, which she confesses is a real childhood fear that has stuck with her as an adult.

All traditional MST3K tropes. But “Making Contact” is not typical of the show’s cinematic targets. Rather than featuring stumbling costumed monsters, this film was made for mainstream release by Roland Emmerich. Emmerich would go on to produce major movies such as “Independence Day.” But for “Making Contact,” his first big American movie, he seems to be channeling, in a lighthearted way, summer blockbusters such as “ET,” “The Goonies,” and “Poltergeist.” Films built around “a weird group of kids,” Marsh says.

“It’s basically, like, four Spielberg movies all smashed together,” she says.

There are qualities that a big-budget film such as “Making Contact” share with the bargain-basement ethos of “Manos: The Hands of Fate.”

“There is just such a true and earnest effort, which I think is the best for MST3K movies,” Marsh says. “I know that Joel has always said they avoid comedy movies, they avoid movies that are trying to be camp or silly sort of on their own. It’s kind of hard to make fun of something that’s already making fun of itself.”

Indeed, with respect to earnest intentions gone wrong, “Making Contact” speaks for itself.

“There are some things that are even so hilarious that we don’t need to say anything about them, and that also is nice,” Marsh says. “The movie itself is making this whole episode entertaining.”

Yet whatever the budget, there is one important commonality shared by the “Mystery Science Theater 3000” targets. “I know I’ve spent many a time debating about this with friends,” Marsh says. “What makes an ideal MST3K movie?”

Marsh hit on it when she returned for her follow-up job interview with Hodgson. He recalled with appreciation how, in their first meeting, she had offered her mother’s opinion of “Mystery Science Theater 3000” as not worthy of a national tour.

And Marsh then felt compelled to amend her mother’s critique with that one, very important, additional adjective.

“Well Joel, now that you brought it up, I have to be honest,” Marsh says she confessed to Hodgson. “She said, ‘How did that stupid show get a national tour?’”

Jeff Spevak is WXXI’s Arts & Life editor. He can be reached at jspevak@wxxi.org.