PHOTO BY MAX SCHULTE The Rev. Myra Brown has led Spiritus Christi since 2017.
Correction: The original version of this article mistakenly had the name of Spiritus Christi's operations manager as Graham Davis. His name is Davis Craig.

Ask the Rev. Myra Brown, the pastor at Spiritus Christi Church in Rochester, where the roots of her faith first took hold, and she’ll tell you the story of the teacher, the mother, and the paddle.

It was the early 1970s, and Brown was in second grade at a rural Orleans County school. In those days, misbehavior wasn’t remedied with a trip to the principal’s office or detention, but rather the swift swing of a paddle along the backside. No student was said to be spared, but to Black students like Brown, it seemed, the hand that swung the paddle was a little more eager.

Such was the case when Brown’s teacher, a Ms. Jackson, gave her a paddling for asking permission to use the bathroom. Later that day, Brown’s mother, who, like her husband was a Southern Baptist from Arkansas who made her way north as a fieldworker, marched into the school and demanded directions to Jackson’s classroom.

“The principal said, ‘What do you want with her?’” Brown said. “She said, ‘She paddled my second-grader, and I’m going to let her know what that feels like.’”
Brown neither received another paddling nor saw much of Ms. Jackson after that.

The story is one that Brown recounts fondly because, for her, it encapsulates the maxims of the Christian faith in which her parents taught her to live: stand up for the oppressed and do unto others as you would have them do unto you.

“My mother modeled speaking truth to power, and being able to cut it into what was just, and what’s unjust,” Brown said. “She never flinched, her and my dad, in taking on a system that was harming vulnerable groups of people.”

For Brown, 55, those lessons from her parents, as well as key tenets of the Bible, had a lasting impact. She doesn’t just model her pastoral work at Spiritus Christi on them. Those teachings of justice, of fairness, and of standing up for others fuel her work on local anti-racism efforts, behind which she is a driving force.

That work ultimately thrust her into the public eye this past September, when she placed herself between officers and demonstrators during the peak of nightly protests over the death of Daniel Prude at the hands of Rochester Police Department officers.

A PREACHER, A COP, AND A MAYOR WALK INTO A ROOM …

Brown’s church, Spiritus Christi, is a progressive house of worship in the Catholic faith. She was ordained a priest in 2017 and began leading the congregation two years later, becoming the third Black woman to helm an independent Catholic church in the United States.

Women are not allowed to be priests in the Catholic church. But then, the Vatican doesn’t recognize Spiritus Christi as a church.

That feat aside, most residents of Rochester became familiar with Brown through the central role she came to play as an arbitrator between protesters, police, and City Hall last year as tensions erupted over the news of the death of Daniel Prude.

She stepped into that role on Sept. 5, 2020, when police launched a barrage of PepperBalls and tear gas canisters into a sea of demonstrators whom Brown was marching alongside on State Street.

Brown led some of the protesters to safety in her church on nearby Fitzhugh Street, where a team of medics were there to tend to injuries. Believing the protest was over and having yet to write her sermon for the next day’s Mass, Brown went home around 10 p.m. 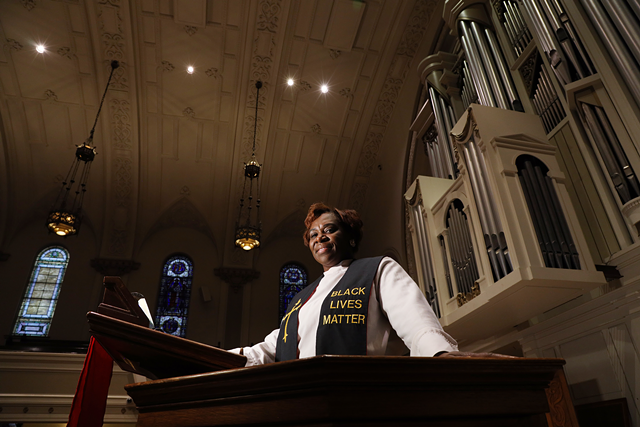 But through the night, the remaining protesters were pushed onto the one block strip of Fitzhugh where Spiritus Christi sits across the street from City Hall. The church became a sanctuary for protesters seeking refuge from the chaos. Police officers formed a line outside the church. Demonstrators who attempted to leave faced PepperBalls and possible arrest.

Davis called Brown and relayed the situation. She said she was furious, and immediately attempted to call then-Chief La’Ron Singletary. He didn’t pick up, so she called Mayor Lovely Warren. After the conversation with Warren, Warren gave Singletary a call, and Singletary picked up when Brown dialed again.

“I said, ‘La’Ron, I want you to guarantee they’re not going to bother those protesters, I need them to get to their cars, and I need your officers away from my church,’” Brown said.

Over the next few hours, protesters were let out in small groups to make their way home. It took until 1 a.m. before the last protester left the church.

Brown was still angry at the events of that evening, and in the coming days, convened a meeting with herself, Warren, and RPD’s top brass on how future protests would be handled. That meeting culminated in the “Elders” program, a group of prominent community leaders who would effectively serve as a barrier between police and protesters.

“In that conversation, my only goal was to provide space for protesters to have some relief, to stop being bullied by police,” Brown said. “To stop being retraumatized by the lack of cultural and systemic humility that didn’t understand if their system is the author of harm, their system has to be the author of healing. Get out of the darn way.”

A STUDENT OF HUMILITY

Brown recalls being a young woman and a Jamaican man asking her out on a date. It was the first time in her life, she said, that she realized she held some prejudice.

“I watched enough of those movies where they had the dreads and the AK-47s and all of that, that somehow, as a young woman, I realized I was prejudiced against Jamaicans,” Brown said.

Brown built a belief that all people, regardless of ethnicity, hold some form of bias. That realization formed the foundation for anti-racism initiatives she helped spearhead. One of them is the Spiritus Christi Anti-Racism Coalition (SPARC), a hodgepodge of people from different walks of life who aim to root out racism in Rochester.

Racism, she believes, persists because people often are not humble enough to question themselves. A major goal of SPARC is to initiate those tough, often uncomfortable reflective conversations. Brown and company offer talks with everyone from colleges to candidates for political office to navigate them into confronting their own biases.

“The first reaction is defensiveness, because to name it as racism is to connect that person to racism, which feels like a violation of their self-identity,” Brown said.
She believes that the system of policing has been hardened against the critical self-reflection necessary to confront biases, subtle or overt. As a result, she said, systemic racism has been allowed to run rampant.

“It’s designed to think a certain way about people of color, and how they move, and how they think, and how they feel, and what they’re entitled to,” Brown said. “It’s why we saw a different response from that same system to a predominately white protest in Washington than to the protests we saw over the summer.”

In 2017, Brown spent a week traveling across cities that were catalysts for racial justice, like Selma, Alabama. Through conversations with police, she found officers, even those who may have come in with the best of intentions, were ultimately worn down by the system they worked within.

A CALLING, NOT A CAREER

Brown first officially joined the church following a series of losses. Her husband, mother, and grandmother all died in 1991, and Brown, desperate for guidance, found her path through the parish.

Simeon Banister, the vice president of community programs at the Rochester Area Community Foundation, met Brown through the church at a young age. He said what sets Brown apart is she lives her words.

“I really think Myra sees her work as a calling, not a career, and she really embraces that,” Banister said. “Whether she’s on Joseph Ave. or at City Hall, that’s what I’ve always appreciated about her, she’s consistent.”

Davis, who has worked for Brown for two years, echoed that sentiment. He said Brown often will “stop her entire day,” side-tracked for hours by a happenstance meeting on the street where someone needed help, and she was moved to give it.

“She really lives out the gospel teachings, and she leads by example,” Davis said. “Working here is inspiring, because I feel like I have a leader I can genuinely follow, and she always challenges me to be better.”

Brown sees her purpose as a community arbitrator, someone who can get the ball rolling on confronting long-standing societal ills, and she’s willing to put her own body on the line to get that job done. A photograph of her standing toe-to-toe with an RPD officer outside City Hall during a heated protest has become an enduring image of Brown and the demonstrations.

Brown was not just negotiating. She was telling the officer if they were going to arrest anyone, to arrest her first. She likens the mission she is on to that of Dr. Martin Luther King, Jr., as a faith leader with a calling to serve on the frontline with those seeking justice. 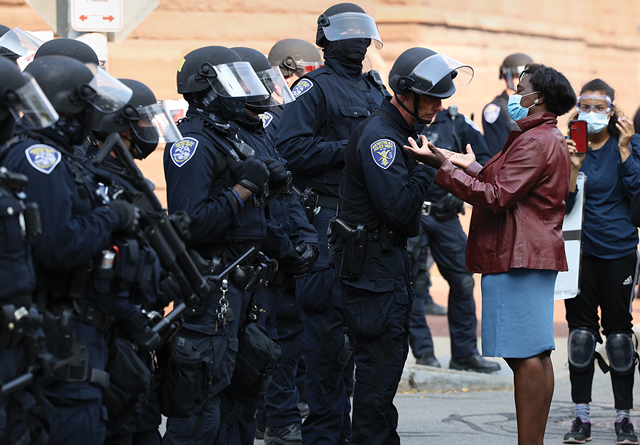 “It was a similar call, he spent his whole life preaching to his congregation and his people that there was a problem,” Brown said. “And that we need to be part of the solution.”