My family's Thanksgiving dish to die for PHOTO COLLAGE BY JACOB WALSH
Turkey, stuffing, and mashed potatoes are staples of any Thanksgiving feast. But every family has that dish to die for that makes the whole meal sing.

We asked three Rochester chefs to share the recipes that had them clamoring for more as children at the kids’ table and that they still prepare today — with any updates of their own.

Loosen that collar and unbuckle that belt to make room for these Turkey Day treats. 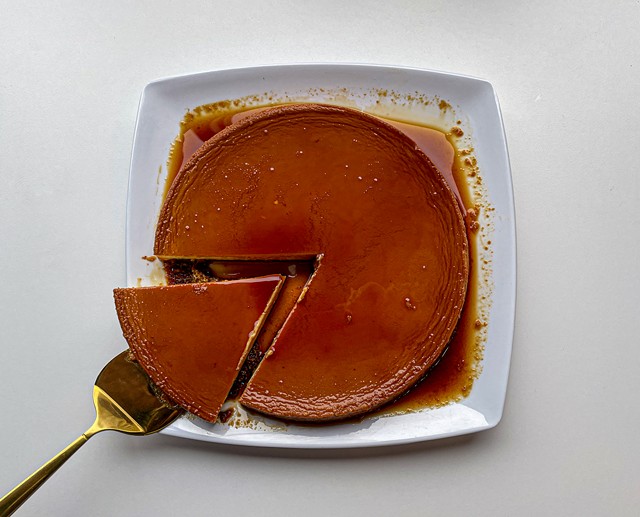 Hailing from a family of nine, Palermo’s Market Chef Wilfredo Arguinzoni says the traditional Latin dessert “would not last long” when it made an appearance during the holiday. His mother, Cheryl Lynn Arguinzoni, the baker in the family, perfected the caramel flan, and Wilfredo recalls helping her if only “to lick the spoon.” Wilredo has not altered his mother’s recipe aside from adding fresh lemon juice. “On top of the sweet and creaminess, you get a light lemony zest,” he says. 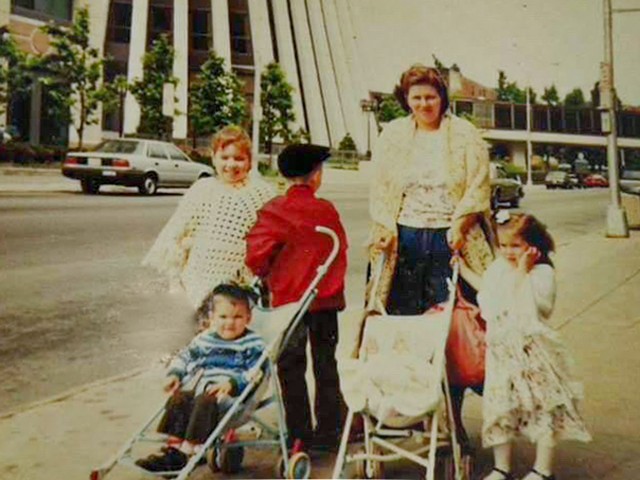 Directions
Preheat the oven to 350 degrees.

Sprinkle sugar in an even layer in a saucepan over medium heat. Cook until the edges start to brown, about 1 minute. Drag sugar into the center with a spatula. Continue cooking, stirring from time to time, until caramel is an even golden brown, about 4 to 5 minutes.

Pour caramel into a 9-inch flan mold or baking pan. Swirl so that caramel reaches 1 inch up the sides. Pour the condensed milk mixture on top. Set in the water bath.

Set the flan and water bath in the preheated oven; bake until a damp table knife inserted into the center comes out clean, 45 minutes to 1 hour. Remove from the oven and let stand for 5 minutes.

Chill flan in the refrigerator until firm, about 2 to 3 hours.

Invert onto a serving plate so that caramel is on top. 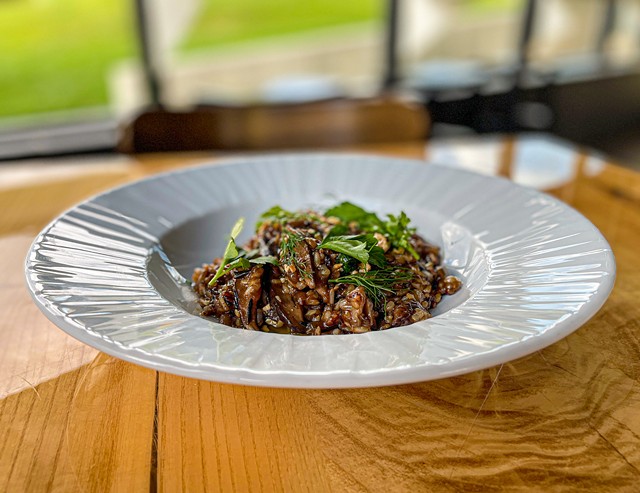 Carnegie Cellars Chef Steven Lara remembers smelling his favorite dish as a child because “the beef consommé is potent.” The original recipe, passed down from his grandmother, Phyllis Felicitas, consists of simple ingredients, much of which were store-bought. Lara has “chef’d up” the dish, elevating it while retaining its foundation. For instance, he swaps canned mushrooms for shiitake and uses pecorino Romano instead of cheddar cheese. 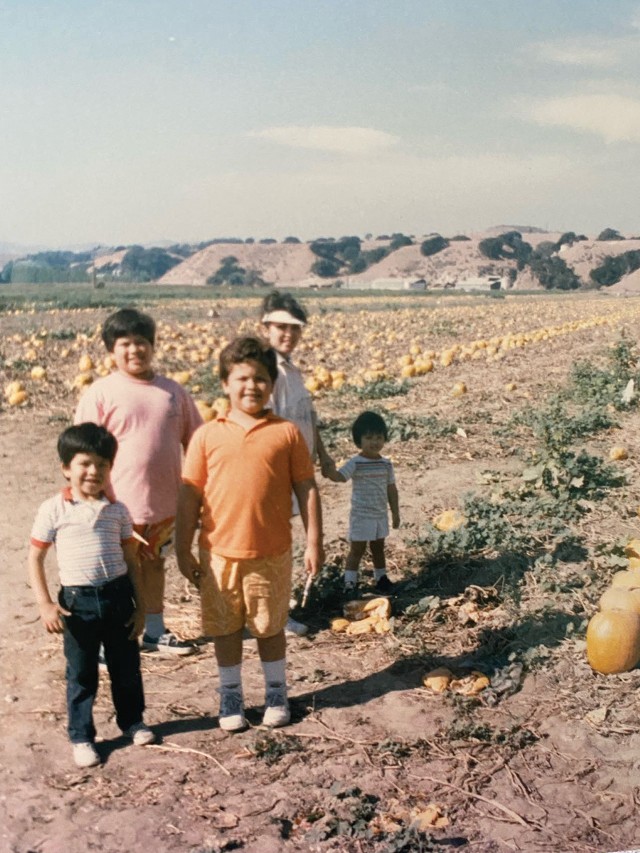 Directions
In 5.5q sauté pan, add oil and warm over medium high heat, add onion and garlic and cook until translucent. Add rice and butter to pan and continue to cook until rice begins to brown.

Deglaze pan with white wine, stir contents of pan until wine has reduced by half. Add stock, shiitake, and pecorino.

Bring to boil then cover pan and reduce heat to low and let cook covered for 1 hour. Top with almond picada.

Directions
In a small skillet, heat 2 tablespoons of olive oil over medium heat. Add the bread and cook until toasted and uniformly golden on both sides. Remove bread from the pan, and transfer to a cutting board. Cut into small cubes.

Return the skillet to the burner leaving any leftover olive oil from toasting the bread in the pan. Lightly toast the almonds and garlic until lightly golden, stirring frequently, about 3 to 5 minutes. Remove the pan from the burner.

Transfer the cubes to a food processor. Add the almonds, garlic, any remaining olive oil from the skillet, and the parsley. Pulse until finely chopped, check seasoning and add salt if necessary 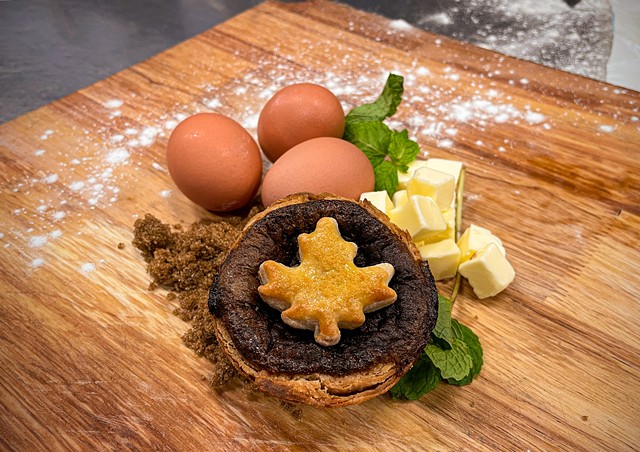 Lizzie Clapp, co-owner of Petit Poutinerie, recalls this sweet being at every family event. A culinary heirloom from her Canadian father’s side, the butter tart has, as Clapp puts it, “a classic flaky pastry crust and an interior of ooey-gooey caramely sensation.” Brown sugar, maple syrup and butter (repeat 3x) are the main ingredients. The tarts are unchanged from the original recipe, which Lizzie learned from her aunt, Beulah Brule, save for the addition of a maple leaf to the top as an homage to our northern neighbor. 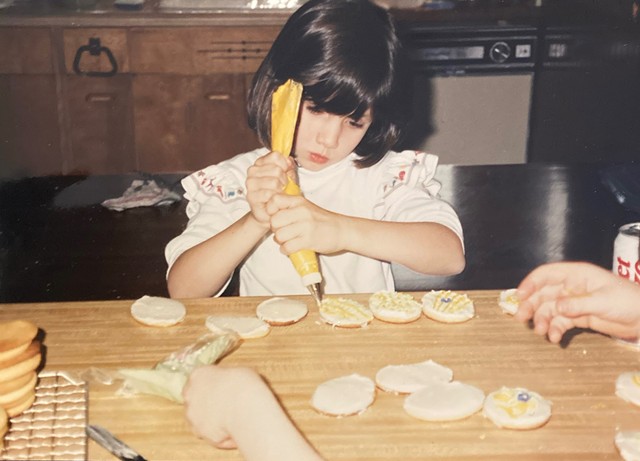 Directions
Using a pastry cutter, cut butter and crisp into flour. Work in flour until crust is incorporated and chill. After at least an hour chill, roll out the dough with a pin until approximately seven 5-inch circles can be cut. Using a 5-inch round, cut out six circles and place in a greased muffin tin. With remaining dough cut out six small maple leaves. 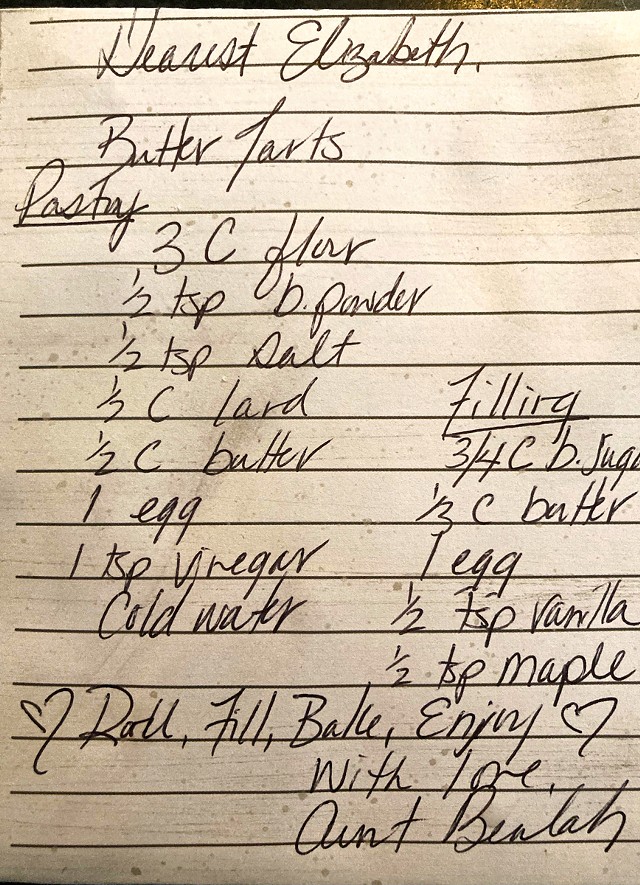 Directions
Combine in food processor until smooth. (Add golden raisins if desired, not for us at the Poutinerie.)

Fill the tart dough shells that have been rolled out and placed in the muffin tins 3/4 of the way full of sugar filling.