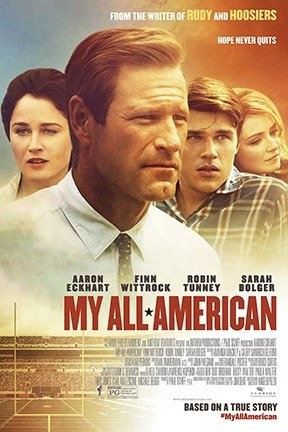 Video
Awarded a scholarship to the University of Texas at Austin, small but scrappy Freddie Steinmark gets a chance to play football for coach Darrell Royal (Aaron Eckhart) and the Longhorns in the late 1960s. Alongside old teammate Bobby Mitchell and new friend James Street, Steinmark helps the Longhorns find success. When Freddie suffers an injury that leads to a shocking diagnosis, the young man must utilize his indomitable spirit and courage to rise to the challenge like a true champion. - Synopsis courtesy of Tribune Media Service

Sorry there are no upcoming showtimes for My All American