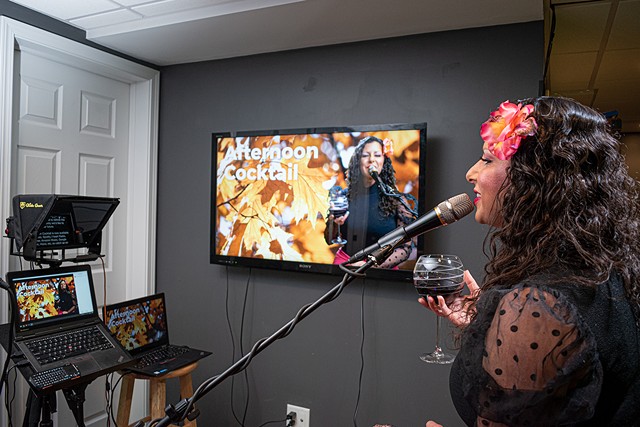 Before the pandemic, Rochester singer-songwriter Amanda Ashley was a ubiquitous live performer with a sultry pop-rock voice, performing at bars and restaurants all around town.

Now she’s more likely to be found behind a talk show microphone than a piano or guitar. Since the pandemic first squashed live music back in the spring, Ashley has reinvented herself, moving into the digital media field and starting the podcast “Afternoon Cocktail.”

Each Monday, Wednesday, and Friday at 1 p.m., Ashley streams live from her Webster home, where she speaks to listeners and guests in a calming, conversational tone.

“Afternoon Cocktail” started in March 2020, one week after the quarantine began. Now with more than 70 episodes in the books, the talk show has completed three seasons, and began its fourth on Dec. 14.

“Each show’s theme is juxtaposed with current, relevant topics in an effort to lead a conversation that warrants an artistic and entrepreneurial perspective,” Ashley says. “It is essentially a wellness show designed to entertain, educate, uplift, and inspire our audience.”

The talk show’s themes have included survival, positive affirmations, empowerment, and laughter. Experts on each topic weigh in to discuss its current societal relevance.

Ashley is a savvy self-promoter, but reserves the sports for her guests, who join her over Zoom.

“I find myself far less interesting than the people around me,” she says. “Psychologically, I had been studying to get myself mentally on track. My main motivation in it all was to use the platform I had already created to project inspiration and positivity to those who needed it most.”

Ashley says she really believes during times like these, people need to focus on lifting one another up, and being mindful of how their actions touch those around them.

Ashley has a degree in fine arts from SUNY Fredonia, and has always been interested in writing and journalism. She structures “Afternoon Cocktail” with opening and closing monologues that bookend guest interviews and performances. Her life partner, Beau Ryan, handles the production’s sound and lighting.

Most often, Ashley features two guests — a singer-songwriter and an entrepreneur — plus a particular cause or not-for-profit organization.

“It was great,” Fernandes says. “She’s extremely professional and kind, which made both Cooper and I very comfortable. She’s a talented artist in her own right, so her questions were very relevant. You can tell that she takes a lot of pride in the production quality and it has the feel of a next-level show.”

Ashley says “Afternoon Cocktail” inspires her to put herself in the shoes of her guests.

“These are very real times that we are going through, and I find it important to acknowledge the human factor in it all,” Ashley says. “Keeping it real is really important to me.”

Ashley says she experienced a few waves of emotions throughout the pandemic. “Keeping the show frequent has kept me focused,” she says. “Motivated, hopeful, and mentally in check.”

“In a time of isolation, I truly feel more connected to the universe than ever,” she says. “I'm grateful to be able to bring my focus back to writing.”

The amount of journalistic writing she has been doing, putting pen to paper, has been good for her soul, she says.

“I think if this pandemic has brought anything in to focus, it's that life can change in an instant,” Ashley says. “And that we have to take care of ourselves and those around us first.”