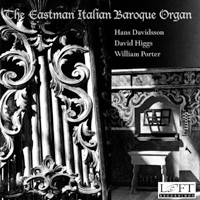 An instrument stars in a new LOFT recording, which like many solo organ CDs, exists to showcase a particular set of pipes. On this CD, three guys rev up the Eastman Italian Baroque Organ (recently installed at the MemorialArtGallery) and show us what it can do. Hans Davidsson, David Higgs, and William Porter wisely chose 18th-century music with fluorescent appeal that expresses the orderly sweetness of the Baroque. I especially like the fluty Sonated'intavolatura from 1716 by DomenicoZipoli, which David Higgs infuses with delicate charm. Some of the pieces on this CD curled my toes. Others had me diving for the skip button. Between the light and shadow, I kept thinking how remarkable it was to be able to hear them at all! The Eastman Italian Baroque Organ offers a kind of podcast from the 18th century, when air moving through pipes enchanted.

Please, please put away your preconceived punk-poindexter notions of Elvis Costello. The man is a songwriting genius. And his new My Flame Burns Blues is simply beautiful.

Costello says this album "may explain what I've been doing during the last twelve years when I haven't had a guitar in my hands." My Flame Burns Blue has Costelloreally swinging big band style with a bluesy swagger and jazz proficiency. The sound is so incredible it's hard to believe it's a live recording --- recorded at The North Sea Jazz Festival in The Netherlands with The MetropoleOrkest.

Costello takes his own tunes like "Almost Blue" and "Watching the Detectives" --- along with contributions from Charles Mingus, Burt Bacharach, and Billy Strayhorn --- and paints them with a lustrous orchestral wash. Bossa nova beats and cascading strings give the album a grandiose lounge feel full of red velvet and cocktails. And Costello's voice sounds fantastic, believe it or not. His aim is still true. This is music to fall in love to. This is music to fall in love with.

Remember: A Tribute to Wes Montgomery

Tribute albums are everywhere you look in the jazz CD bins. With the acknowledged masters of the mid-20th century almost all gone, contemporary artists can't help but dip into the rich pool of brilliant work they left behind. While most of these tributes are loose salutes, with artists taking up the material but putting their own spin on it, one recent effort breaks the trend. On Remember: A Tribute to Wes Montgomery guitarist Pat Martino stays as close to Montgomery's sound as possible.

Montgomery was a major influence on Martino in his formative years. When, as a boy, Martino was introduced to his idol in a nightclub, Montgomery made a strong impression on him. Now, four decades into his career as a top jazz guitarist, Martino decided to re-explore these roots. The resulting album cooks from start to finish. All of the great Montgomery classics are here: "Four on Six," "Full House," "West Coast Blue" and many more. With John Patitucci on bass, David Kikoski on piano, Scott Allan Robinson on drums, and Danny Sadownick on percussion, the album rides along on a continuously infectious groove. And while the arrangements adhere closely to the originals, Martino can't help but inject his own wonderful style into numerous solo excursions.