Gaylord founders Jeff Steverson and Corey Adams managed to invent their own musical language while still wearing influences like Big Hair, Primus, Mr. Bungle, and Rush on their sleeve. Their work, a raucous blend of prog, metal, and funk with heavy traces of classical, continues to elicit a fanatic response from audiences nearly 10 years into Gaylord's history.

Recorded shortly after a three-year hiatus, this EP sees the local trio continuing to work with the trademark structural complexity --- something it seemed they had taken as far as possible before disbanding. Here, however, the band wisely tempers its approach by introducing some repetition. While much of the material shifts in style and tempo almost compulsively (as usual), many of the songs gravitate around and return to central motifs, which suggests that the band isn't simply stitching together parts and quite possibly stands at the cusp of a grand new vision that's more cohesive than anything it has offered to date. 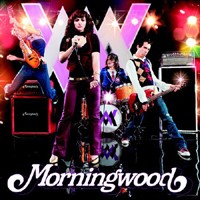 Morningwood describes its music as "a monster truck having sex with a Bond girl." Yup.There's big rock riffs. There's cheeky sophistication. And there's plenty of humor. This New York City foursome's self-titled debut (produced by Gil Norton of Echo & TheBunnymen and Pixies) is shake-your-booty-pop-rock music. Singer Chantal Claret is a 23-year-old smartass (just check out the tune "Babysit" where she coyly seduces her young charge) with killer pipes and an amazing sense of melody.

With members coming from the ranks of CiboMatto, Spacehog, and The Wallflowers, the band rocks glam, trashy, new wavy, classic, and fun. This is one of those great records that can bridge the gap between certain jaded music critics and their pre-teen nieces.

Jon Spencer's reverent and antagonistic take manages to breathe life into rock 'n' roll's bloated black leather corpse and get it to dance. The music he has created in projects like Pussy Galore, The John Spencer Blues Explosion, Boss Hog, and various outings with unsung legends like the late R.L. Burnside have always burned hot and bled raw. Spencer never seems to over-think it or horse it into the boat.

Combining talents with producer and Speedball Baby guitarist Matt Verta-Ray, Spencer once again destroys in order to build an even cooler monster. Verta-Ray's slick twang adds a little lonesome to the grit and tones down Spencer's mania a bit. This debut disc almost sounds like a demo in all its ragged glory. There are lo-fi studio stunts, Spencer and Verta-Ray play virtually all the instruments, and we get a batch of 13 greasy nuggets ranging from blues-boogie to rockabilly to the r&b freak-outs we all need.

The Life and Times of Steven Character

If Jeff Spicoli had an evil twin, it would be Burke, who nonetheless fulfills his social responsibility by starting this album with an instructional bit on bong-smoking. Given his resume (Sulaco, Lethargy, Nuclear Assault, Mungbeandemon, Kalibas, etc.), you might dismiss BCT as a goofy dalliance where he plays all the instruments. Think again --- Steven Character exhibits Burke's sick drum chops and sophisticated mind for structure even in songs that last 45 seconds. Though overloaded with cliquey inside humor, this material amply demonstrates why Burke is considered a creative force to be reckoned with in the metal underground.

Comparisons to Jeff Buckley and Chris Whitley shouldn't be made lightly, but they're no longer a stretch for local singer-songwriter-guitarist Justin Roeland, who unveils a masterpiece in the wake of his recent relocation to the California shore. As guitarist and principalsongwriter in the meat-and-potatoes rock band Pompous Pilate, Roeland demonstrated an uncanny ability to take well-worn classic influences like Pearl Jam, U2, and The Police to new places. He also showed a blossoming ear for mixing and production.

Clearly, Roeland had a vision, but nothing could have foreshadowed the quantum leap he takes with Black Flies, which he played, recorded, and mixed entirely on his own. Conceived largely when Roeland was just emerging from sleep, Black Flies conveys atmosphere and texture so masterfully and distinctly that it indeed sounds like something from another world. It will attach itself to your memories, haunt them, and trigger new ones all its own.

Fresh off his stint portraying daddy Waylon in the Oscar-nominated Walk the Line, along comes Shooter Jennings with his sophomore record, Electric Rodeo. The follow-up to Put the 'O' Back in Country (wait for it... ) picks up where the debut album left off, but resist the urge to saddle him with the oft-misused alt-country label. Jennings makes beer-swilling, girl-screwing southern rock as if George Jones were a long-lost Allman Brother drafted to front LynyrdSkynyrd.

Rodeo features cocky stomps like "Manifesto No. 2" that glorify an outlaw way of life, followed by the inevitable slow-dance apology for impulses a good ol' boy just can't control ("Aviators"). It ain't terribly innovative, but country has never had to be. As long as there's a little honky-tonk piano, the occasional fiddle, and some mournful pedal steel alternating with balls-out guitar, it works.