It’s unlikely that then-17-year-old Nathen Maxwell knew what the next 15 years of his life would be like as he was sneaking in the back door to the Los Angeles pub Molly Malone’s in 1997. Well, he did know it would involve music. 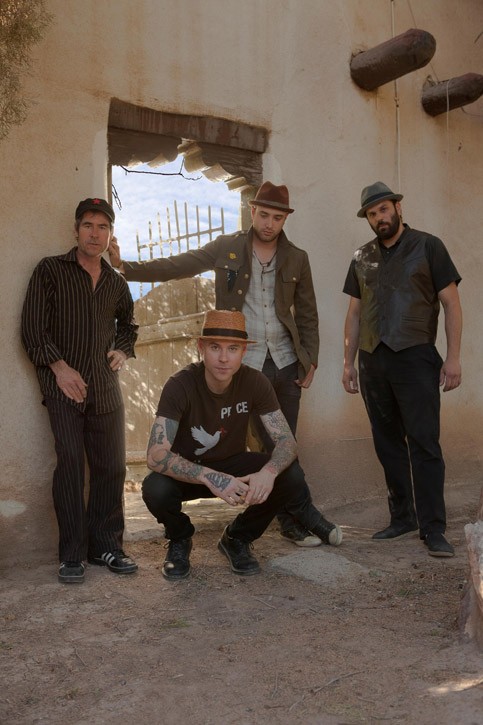 Maxwell had dropped out of an L.A. area high school to follow his passion for music, and was the lead singer of a local punk band. Frustrated and looking for more serious musicians, he took the advice of his father — a musician in his own right — and checked out the Dave King Band, which was in the process of reforming. King, without ever hearing Maxwell play a note, asked him to join what would become Flogging Molly, the Irish-rock band that Maxwell has now played bass in for nearly half his life.

Although he is now a self-described bass head — Maxwell cites Bassnectar and dubstep as the kind of music he’s currently into — drums and vocals were the musician’s first loves. But he’s always liked to go low. “When I bought my first bass combo amp I’d sit there in my garage and lie down, and just detune it as low as it would go and hit that low note and feel it flow through me,” Maxwell says. “So I always had a bass around.”

When Maxwell decided to take music more seriously, bass seemed the natural choice. “I wanted to back someone up and learn from someone great, and that’s when I met Dave [King] and met Flogging Molly… These guys were great and I had to catch up. And that’s been 15 years of rocking the bass for Flogging Molly.”

For many people, the story may have stopped there: finding success as part of one of the most successful punk bands in recent musical memory. But even before Flogging Molly, Maxwell had always been a songwriter himself, and with a pile of his own work stacking up, he wanted to share it. While he has taken vocals on and written two songs for Molly (“Cruel Mistress” off of “Drunken Lullabies” and “Queen Anne’s Revenge” on “Within a Mile of Home”) it wasn’t until he formed his own group, The Original Bunny Gang, that he truly began his own musical journey.

The seeds of The Original Bunny Gang first germinated in Ireland, during Flogging Molly’s recording session for 2008’s “Float.” As Maxwell recalls, “Dave said, ‘You know, I love these songs, Nathen, but you really have your own story, and I really believe that you should do your own album outside of Flogging Molly to tell your own story.’ And I took that as a huge blessing.”

“I’m so lucky to have a band like Flogging Molly be supportive. I’ve heard horror stories about people getting ultimatums, and I’d hate to be in that situation,” Maxwell says.

With the go-ahead, Maxwell called up his father to join him on drums, and Ted Hutt, Molly’s original guitar player, to produce. Together they recorded “White Rabbit,” an album that finds Maxwell taking on a different sound, resulting in an acoustic-folk-reggae romp. It’s simplistic and sweet, with gently strummed guitar patterns over Maxwell’s soft, beaming voice grooving to laid-back tempos. It’s a far cry from the hard-hitting punk-rock assault that he’s known for in Flogging Molly.

But that doesn’t concern him. “When I’m here writing music and creating the Bunny Gang, I’m not thinking about how I impress the Flogging Molly fans. I think that would just be boring, and would be a waste of time, you know what I mean? I’ve dedicated myself to the real-deal thing with that, so my only mission is to make the Bunny Gang as authentic in its own right, which by nature is going to be different,” he says.

The Gang just wrapped up recording on its second album (adding Michael Peralta on bass and Nat Nelson on lead guitar), which is due out early next year. The result is a progression to a full-band effort, instead of a mostly solo acoustic effort on Maxwell’s part, like “White Rabbit.”

“It’s a totally different animal, and it’s a lot more exciting…I love and I really am proud of ‘White Rabbit,’ but I’ve never been more proud of an album [than this one],” Maxwell says. “For the first time in my life I feel like I’m authentically expressing myself through this music. It’s a liberating feeling.”

Now that Maxwell finds himself as the front man of his own group, it comes with unique challenges as opposed to playing bass for Molly. “Singing is a whole other dimension. With Flogging Molly I was shouting backup vocals…I could party hard and smoke and talk and scream and it didn’t really matter if I lost my voice,” Maxwell says. “You’ve got to take care of your throat. You can bang the shit out of your bass guitar and if you got a good one it will hold its shape and keep going on, but if you crash your voice too much it stops.”

For this tour, Maxwell has also drawn inspiration from contemporary musician Chuck Ragan, who hosts a yearly revival tour of musicians who take turns sharing the stage and playing each other’s songs with no real headliner or set times.

“It’s not like, OK, headlining band is over, buy your stuff and leave,” Maxwell says of the tour. “No, the Bunny Gang is done, and now everyone’s going to be together on the dance floor listening to awesome music and hanging out. I’ve learned from Chuck and that’s something we’re trying to create on this tour as well.”

Even with two bands under his belt, and a near-constant touring and work schedule, Maxwell continues to connect with audiences through both groups, never wavering in fulfilling his dream of making and spreading music.

“This is my life; this is my life’s work. I’ve never had a plan B and I never will. This is what it takes,” he says.