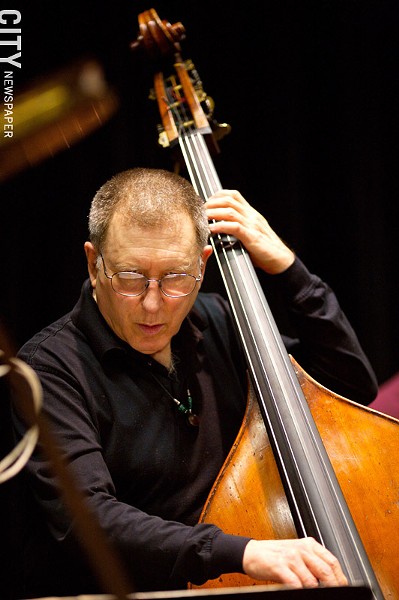 PHOTO BY JOHN MELOY Jazz legend Chuck Israels is one of the nearly 1000 bass players who will come to Rochester next week as part of the International Society of Bassists Conference. 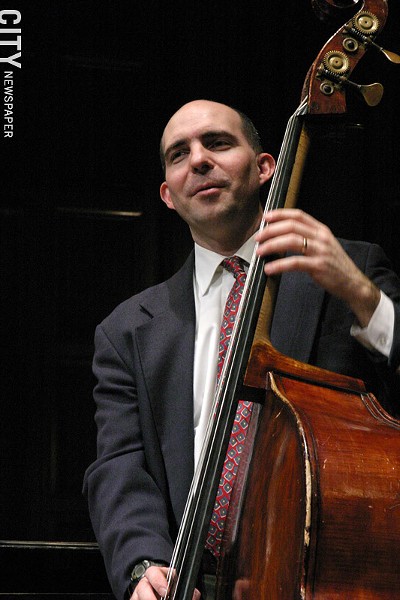 Don't be alarmed if you hear a deep vibration emanating from downtown Rochester next week. It's not an aftershock from the recent Ottawa earthquake; it's hundreds of bassists meeting at the Eastman School of Music.

"When I play certain low notes on my bass in the orchestra, you can feel it in your skeleton," says Jeff Campbell, Eastman professor and co-host of the International Society of Bassists Convention, which starts June 2. "In pieces like Beethoven's Third Symphony, the low notes feel so strong. I have a great bass that's very vibrant and, when I play certain notes, I can feel it move my rib cage and the bones in my legs."

The convention is expected to draw about 1000 participants from 30 countries. Aside from master classes, recitals, and lectures, there will be solo, jazz, and orchestral bass competitions, a composition contest and a bass builders competition in which newly made instruments will be judged for workmanship and tone.

There will also be nightly concerts featuring some of the greatest bassists of our time, including Ron Carter, Victor Wooten, Dave Holland, and Chuck Israels.

Israels was studying to be an engineer at Massachusetts Institute of Technology in the mid-1950's when his life took a different path. On the side he played guitar and cello and there were two Boston musicians with whom he was interested in working. They needed a bass player.

"If you have two instruments that you need to know before you play the bass, guitar and the cello are probably the best," says Israels. "It took me about three weeks to be ready to be part of that trio."

A few years later he was asked to join one of the greatest groups in jazz history: the Bill Evans Trio. "I didn't know a lot of the things that I needed to know when I joined Bill," says Israels, "but there was a profound agreement about how music works and that hasn't changed in my thinking since leaving Bill."

Israels also played with John Coltrane, Stan Getz, and other jazz greats. "There were chances to play with so many different musicians because jazz was a part of the everyday fabric of our lives," says Israels. "What you now look back upon as being remarkable was at the time fairly normal for someone who was pretty good and lucky enough to be noticed."

Back in the day one of Israels' main influences on bass was Oscar Pettiford. He'll be paying tribute to Pettiford in his concert at Kodak Hall at on June 6. A nonet will play his own compositions and arrangements of works by Pettiford, but, says Israels, "it's really orchestrated Bill Evans Trio."

Jeff Campbell is one of a rare breed of bassists who crosses genres with ease. A member of the Rochester Philharmonic Orchestra, he is also one of Rochester's top jazz players, having worked with Marian McPartland, Phil Woods, and the Vanguard Jazz Orchestra.

He started playing while growing up in Salt Lake City. His dad was a drummer and Campbell wanted to play with him. That meant taking up the bass, and Campbell didn't mind.

"I like the low notes. I like the way they sound. They define the parameters of the harmonic framework of the music. I like to joke that bass is the only instrument in the whole world that has its name on the stereo," Campbell says.

Israels goes further. "The bass supplies the harmonic and rhythmic underpinning for everything that happens on top of it," he says. "You feel like a hero, like the catcher on a baseball team."

Israels and Campbell are both anxious to meet with kindred spirits. "Bassists get along very well," says Campbell. "We're generally calm, laid-back people." Because it's tough to travel with the large instruments, there's a fellowship of bassists who loan each other instruments all over the world.

There's another reason Campbell is looking forward to the convention. "I'm such a nerd about the double bass and there are so many great instruments that will be brought here by the venders from around the country. You get to see the crème de la crème of double basses."

While the instrument's proper name is bass violin, neither Israels nor Campbell thinks of their instrument as a giant violin. "I think of it as a big acoustic guitar, because I play it that way," says Israels, who prefers to pluck lines in a guitar-like fashion.

Campbell explains that the bass is actually a distant relative of the viol, the competitor to the violin 300 or 400 years ago.

"The violin won out as the dominant family of instruments, so you get the viola and the cello," says Campbell. "But our instrument, the double bass, is kind of a leftover of that old viol. So I don't think of it so much connected to the violin, I think of it as our own separate instrument."

And Campbell would play it even if he never got to step into the spotlight. "I'm more happy being an accompanist," he says. "I don't mind playing solos, but I find great joy in making the foundation for the other musicians. I'm glad to play all night long and not play any solos because I enjoy so much the role of the bass."

Thursday, June 6: Diana Gannett performs new works; Chuck Israels pays tribute to a master of bebop with the "Oscar Pettiford and Beyond" Octet