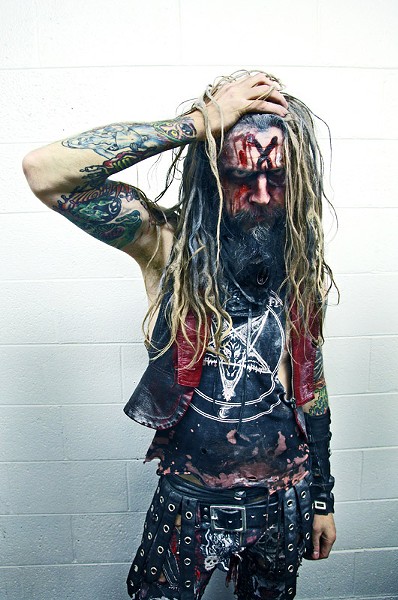 Rob Zombie's brutal creativity is spread equally over his music and films. Both aspects of his career bleed with a visceral cult verve and classic B-movie horror. Zombie's work is over the top. Whether rocking the stage with his trademark metal/industrial kerrang or getting his slasher ya-ya's out on film, one look, one listen and you know it's Zombie. As the leader of White Zombie, he gave just a glimpse of his focus and capabilities -- capabilities that have earned him seven Grammy nominations and created nouveau classics like "The Devil's Rejects," "House of 1000 Corpses," and a cool remake of "Halloween." And just to prove it ain't all underground, you've gotta check out his Woolite commercial.

Zombie called from his crypt to discuss his new movie, his new album, and the fact that there won't be a duet with him and Marilyn Manson on this tour. An edited transcript of the conversation follows.

CITY: Is there one movie or event that sent you down this horror path?

Rob Zombie: Yeah, I think it was when I saw "King Kong." I remember being obsessed with that movie at a very, very young age. I don't know if I saw it first on TV but I definitely remember one time going to the local public library, it was a rainy afternoon and they had 35mm reels they were showing in the basement. I was maybe in kindergarten or something. But even before that, I was born in 1965, so in the late 60's there was a real horror boom, like on TV, "The Munsters," "The Addams Family," "The Twilight Zone," and all these great double-feature shows. It was in the air. I don't know, I've just always loved it.

What's the common thread that runs through all you do?

I just really do what I like. I assume that's what any artist does, though I'm not sure. There are things that you like and you feel they don't exist, and it's something you make. We say all the time, "If I wasn't in this band, I would wish I was in this band," because it has everything we love about it. Yeah, I make movies that maybe don't make sense to some people, and to some people they do, but they're the things that I want to see first. Because that's all you can really do; do what you love and hopefully there are other people in the world that like it too.

Your new movie, "The Lords of Salem," is less of a gore flick and more psychological. Is this a new direction for you?

It's just a different type of movie. It's not really a violent movie, it's not a bloody movie. It's more of a slow-paced suspenseful movie in the vein of "Rosemary's Baby," say. It's more that vibe.

Do your music and filmmaking feed off each other?

When I'm working on a film I'm not thinking about my band or music, it's just too overwhelming. But when I'm on tour I come up with lots of movie ideas.

Your new album harkens back to a more classic White Zombie sound. Is this a bit of a throwback or unfinished business?

It is a throwback in the sense that I feel it's a more sophisticated version of what we were doing back in the day. White Zombie used to write these really long songs and create these song structures that went all over the place, but they weren't necessarily honed properly.

Are we going to get a taste of it on this tour?

No, I won't be playing any of it because the record's not out yet. I don't think anybody's paid their money to hear me test new songs on them.

How come this "Twins of Evil Tour" took so long to come together?

It's one of those things we've been talking about for a long time. It seemed very obvious, but somehow the years would slip by. It was the same thing last year when I did the tour with Alice Cooper, everybody was like, "Oh, this is so obvious, why did it take so long?" Maybe because it was so obvious, nobody was rushing to do it. It's been a great tour though.

Do you guys do anything together on stage?

Not at all. They do their show then we come out and do our show.

I like our show to play almost like a movie. We have a ton of production: video, pyrotechnics, giant robots. I just want the show to be completely over the top visual experience so when you're there, for the two hours that you're there I want to transform you to another place so when the show ends you're like, "Whoa I almost forgot I was here" --- like a great movie will do to you.