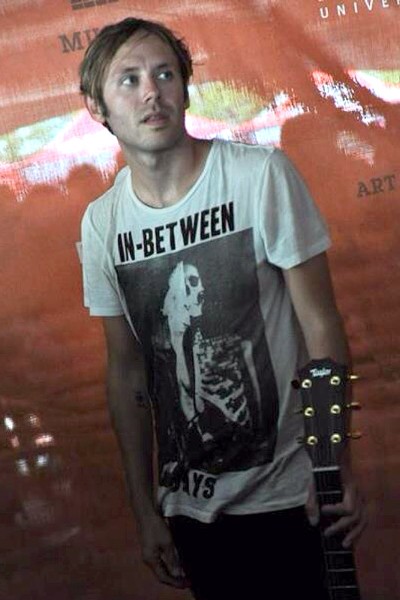 After an almost 15-year run, emo/alternative/hardcore darlings Thursday called it a day in 2012, initially calling it simply a hiatus. But reality set in and frontman Geoff Rickly pulled the plug — literally. He has since started to explore his acoustic side.

Rickly is coming to town as a part of The Acoustic Basement Tour, an unplugged offshoot of the Warped Tour, the popular summertime traveling punk-rock carnival where lyrics and songs in general often get blown out of the water by seething mosh pits, volume, and body heat.

Despite its six-album discography and being cited as a major influence on bands in the hardcore/post-hardcore scene, Thursday never fully emerged from the underground. Qualities that got overlooked, or perhaps buried, in the musical chaos are now being brought to the light by Rickly and his lone guitar. Now the songs have nowhere to get lost and nowhere to hide.

Rickly gave us a jingle to discuss the difference between a hiatus and a break-up, getting comfortably unplugged, and his band's influence on those who didn't get it. An edited transcript of our conversation follows.

CITY: So is Thursday really kaput?

GEOFF RICKLY: Yeah, it looks that way. I guess I could imagine some situation where we'll play a show at some point in the future. We just really said "hiatus" so we would never feel guilty if we did do another show, but not because we were just taking a break. I felt it was a little misleading to say "hiatus." We broke up.

What was behind the break up?

Personal health issues of one of the members. And we had a good run, almost 15 years. So why change now? And I think most of our fans feel we ended on our strongest record and it was like, Well, maybe this is all happening for a reason. We're not going to ruin our legacy by bringing in a new member or release a shitty record and go out with a whimper.

And undo your cool?

Exactly. Some bands wait too long and undo their cool and it's like, you don't get it back, you know?

How'd you wind up solo and unplugged?

I came into this acoustic thing a little bit by accident. A promoter in Dallas invited me down to be part of this singer-songwriter series he had. And I was like, "Eh, I'm not crazy about it." But while I was down there and learning how to play guitar so I could do it, I started writing some other stuff and thought I'd record it, because I liked it. I didn't want to start another career, so I recorded it and gave it away. Then Acoustic Basement asked me to do this Warped Tour thing and I was like, "I'll do half of it for fun, this isn't going to be a regular thing for me --- I've got a job screenwriting and I write commercials." But it went great and by the end I was like, I could do this.

How was it received?

The first tour was crazy packed theaters. I thought, "I like doing this. This is great." So I started writing more songs. And then they offered this tour with Koji and Brian; "Yes, I will definitely do this."

How do you write for this compared to Thursday?

It is so different because the way I used to write for Thursday, I'd come up with a riff in my head that I could hum, I'd find a guitar and I'd show it to the band. And they'd say, "We see what you're trying to play, but it's not what you were playing." I had such great players to lean on, it was a crutch. And now I actually have to commit to playing well to get the ideas out of my head and sounding good. It's really scary.

Aside from the obvious shift in volume, how are the songs different?

I'm Geoff from Thursday, so I'm going to sound like Geoff from Thursday. The things I care about are the same. The songs are soft, not loud, but they still end up in the same emotional territory. But on the other side of it, when I would scream my head off [in Thursday], I was still buried under five musicians playing at top volume. And now, I can go super quiet and the whole theater will be silent. And then when I let out a scream, it shocks people. They react to a singer and a guitar like speech; as if I'm talking to them or yelling or telling them a secret. They connect even though they may not know why.

Are you working against what you were?

Ultimately, what was Thursday's impact on hardcore?

It's hard to measure. If you were young in the early 2000's, there was a pretty inescapable cultural impact it had. You could say there was an underground vein of hardcore that had no hopes of ever being commercial. And when Thursday stumbled into being a really huge band at the time and suddenly this whole generation of younger kids came up wanting to sound like us --- like My Chemical Romance, The Used, Story of the Year... Thursday isn't a household name, but we had such an impact on the scene, for better or for worse.

What do you think of these younger bands?

I think they took from Thursday what was least important and made it the most important. And they ignored everything like the post-modern theory, or narrative as a device that works with the thematic construct of a song... the things that I, being a lit major, thought were really cool. So the short answer is, they sound like Thursday. The long answer is, they have nothing to do with Thursday. It's disappointing, but at the same time it's an ego trip.