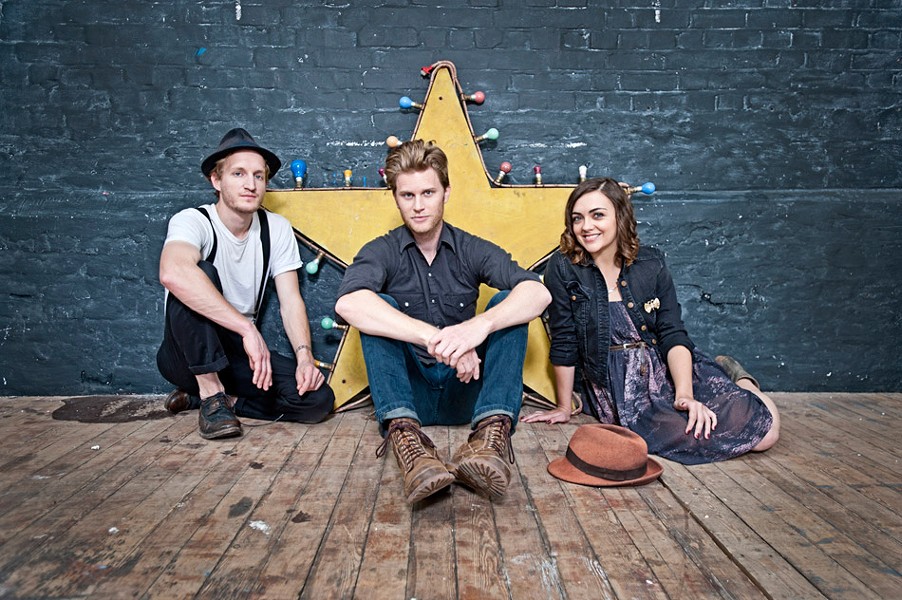 It really only takes one band to spearhead the initiative, to get things rolling. Two bands and you're underground. Three or more bands and it becomes a scene. And if one or more of those bands hits the Top 40 and is selling out venues wherever it plays, well, you've got yourself a movement — even if elements of the movement were brewing all along.

At the forefront of this current insurgent resurgence is The Lumineers, a New Jersey-founded, Denver-based quintet of shining simplicity and sing-along joy. The band has exploded amidst other rootsy acts like Mumford & Sons, The Avett Brothers, and even established artists like G. Love, who are dialing it back to the basics of unplugged bliss.

"I think there's always a place for folk music," says Pekarek, whose first band gig is The Lumineers. "It's pretty wild it's in the Top 40 realm right now, and in with popular music." But she also stresses that The Lumineers isn't an opportunistic venture. The group plays music. What kind of music is credited to the tools.

"I think the way this record turned out for us the way it did is the instrumentation we used," Pekarek says. "It has an acoustic feel. I wouldn't say that every album is going to be that way, but it just felt really natural to us, and we're lucky this type of music is popular right now."

Perhaps fans are hungry for the music's honesty, its simplicity.

"Absolutely," says Pekarek. "We're driven by an electronic-fueled world, whether it's music or otherwise. And I think this resurgence movement is because people want things that are a little more homegrown and back to basics."

But Pekarek assures that the band isn't out to fill a gap or tap into a market that currently embraces what the band — and others in this nascent take on the classic — delivers.

"I think we'd be doing what we're doing either way," she says. "We're just playing music that feels natural to us. Wesley writes all the lyrics and he's really just a good lyricist. It's honest. Whether or not it's biographical, he's just a good storyteller in general. It's just writing songs that appeal to you as opposed to writing it for somebody else, or writing it hoping it becomes popular."

The Lumineers are far from throwback or merely referential folk music. It's the band's unabashed inclusion and acknowledgement of its own individual roots that illuminates the music.

"We're all from pretty different musical backgrounds," Pekarek says. "Wesley had a pretty classic rock 'n' roll background, his dad listened to a lot of Cars, Leonard Cohen, Bob Dylan, things like that. And then Jeremiah, our drummer, he wasn't doing anything in that realm. He was originally making hip-hop beats. He's really into cinematic music, ambient noise stuff, which is subtle in our music — but it's definitely there. And I come from a really eclectic background in classical music. I studied opera and vocal jazz in school. So I come from a totally different side."

Apparently the oddball pedigree and ingredients worked. The band's song "Ho Hey" is a smash, having gone double platinum (that's more than 2 million copies sold). It went as high as No. 3 on the Hot 100 charts. According to Pekarek, its meteoric rise caught members off guard.

"Oh, we definitely didn't expect that," she says. "To management, it was obvious to them that 'Ho Hey' was the first single, and to us we thought all the songs were equally good. It didn't stand out to us as this shining gem amongst the others on the record. I think we're all a bit surprised at the groundwork it's laid out for us."

This has translated into two Grammy nominations, two Billboard Music Award nominations, as well as nominations for a Teen Choice Awards, and a Much Music Video Award. And if that weren't enough, the catchy-as-hell anthem has been applied commercially by the Oscar-winning film "Silver Linings Playbook," the search engine Bing, and even Blue Moon Beer.

But for the band it's all about the fans.

"We really want to make it about the crowd." Pekarek says. "There're a lot of people that feel a part of the show when we play. There's a lot of crowd participation and energy, it's very contagious. Somebody gave me a really big compliment when they said as they watched people leave, they all had a smile on their face."