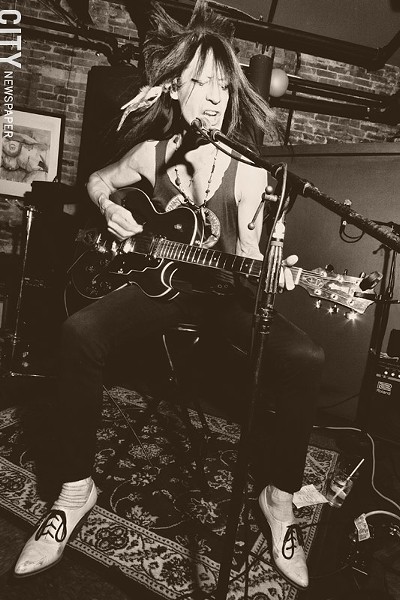 Anticipation ran high amongst the glitterati and the black-clad hoi polloi as Rochester rocker Greg Prevost mounted the Skylark Lounge stage in his high-heeled shoes. A few in the joint had laid ears on his new bluesy solo disc, "Mississippi Murderer," but most were in the dark, not knowing what to expect on this chilly late March evening. That included Prevost, who felt slightly out of his element.

"I hadn't performed in four years," he says. "It was a full house, I was sitting down, I was kind of scared. But I just started ripping into it."

What followed was an eardrum-shattering, soul-shaking battle between Prevost's Jagger swagger and wail and his guitar's primal scream. It physically hurt. Audience members could feel it in their molars. But nobody left. That's because, beneath the cacophony and ensuing nose bleeds lurked some incredibly bodacious gut-bucket blues. It was just the right amount of too much, not enough, and just right.

But you've got to hear the record. "Mississippi Murderer" is Prevost's new solo venture. It's a lowdown, menacing thrill ride that grinds like a lap dance from a fat girl.

After leading garage-rock heroes The Chesterfield Kings for more than 30 years with a voice that was part banshee wail, part garage-rock snarl, part field holler, paired with the stage personae of a chain-free wrecking ball, Greg Prevost had had enough. He split with the band in 2011 and headed for the fairway.

One day, however, Prevost forgot his golf-course-instead-of- rock mantra, picked up a guitar and re-ignited the fever.

"Once I started playing guitar again," he says, "I was like, 'You know, I'm just going to learn 60 to 70 songs I like — Skip James, Bukka White, John Lee Hooker... I kind of wanted it to be like Son House on a National steel, with slide and finger picks. And I just sort of got back into it. I couldn't stay away from it. And as I started playing songs, I began noodling with other things. Then I started writing stuff."

Prevost recorded these raunchy nuggets on a 70's cassette player in his basement. It was crude, to be sure. "It was like 20's delta blues," he says. "Primitive recording, trashy..."

The hip hombres at Penniman Records in Barcelona, Spain, dug Prevost's sound big time and immediately convinced him to let the company put out a limited-edition single, "Mr. Charlie"/"Rolling Stone" under the name Greg "Stackhouse" Prevost.

But it didn't stop there.

"They were like, 'You know, if there were bass and drums and electric guitars on this, it would sound like 'Exile on Main Street' demos," Prevost says. "And that's what happened. This album was going to be all acoustic songs. But I plugged it in. It was the same music, just louder."

After hearing his superb production with St. Phillip's Escalator, Prevost went into the studio and laid it down with Alex Patrick (The Absolutes, producer, and bassist on the record) and Zachary Koch (St. Phillip's Escalator, The Ohm, Chesterfield Kings, and drummer on the record). They somehow managed to harness Prevost's bombastic blast of ballsy blues. With a blend of originals and classics like Son House's "John The Revelator," "Mississippi Murderer" was born.

"We first tried recording in my house," Prevost says. "But it was too loud, stuff was falling off the walls and shit."

As a musician Prevost is as reverential as he is referential; he knows everything by everyone. And he's keenly aware of misperceptions that can be drawn watching a white, long-haired rock 'n' roller sing and play the blues.

In 1990 The Kings recorded "Drunk on Muddy Water," a sloppy, sleazy, raucous blues rave-up with the late, great Paulie Rocco on guitar. The band came close, but big rock production killed the vintage vibe. "Mississippi Murderer" is the record "Drunk On Muddy Water" set out to be, and wishes it was.

A good deal of the Chesterfield Kings' music had black undertones; think Bo Diddley, Chuck Berry, Little Richard. The band twisted it some, often careening into Dolls and Stones territory, but always with at least one toe in blue waters. And from an early age, Prevost was listening to the blues wherever he could and riding the rails.

It was 1964 and the 10-year-old Prevost prowled his Greece-Charlotte neighborhood, including a teen hangout/coffee shop called the Black Candle next to the House of Guitars, then located on Lake Avenue. One day, Prevost spied a simple sign in the Black Candle's window announcing that Son House — who at the time lived in Corn Hill — would be playing. To most 10-year-olds this wasn't a big deal. Son who? But Prevost knew exactly who the blues master was.

"I saw 'Shindig' when the Stones were on there with Howlin' Wolf," Prevost says. "I used to read all the teen magazines, and in Rave Brian Jones was saying [about that performance], 'We played with Howlin' Wolf and it was really a gas, and he was there with Son House.'" When the day of House's show arrived, Prevost says that the one of the owners wouldn't let him in.

"He said, 'Hey, no kids in here, but you can stand outside,'" Prevost says.

Though he wasn't aware of it at the time, Prevost's mode of travel was in keeping with the bluesman's hobo aesthetic. "I used to ride the boxcars," he says. "They'd go by each day. I'd go to my cousin's house, throw my bike in, lay around in the straw, then I'd throw my bike out and ride it home. Sometimes when I didn't want to walk home from school, I'd jump the boxcar."

But today it isn't Boxcar Prevost, it's Stackhouse, with a brick shithouse wall of sound. And the sound has been capably played and produced by Patrick and Koch, who are clearly disciples of The Chesterfield Kings' rock 'n' roll and Prevost's take on the blues, with all its reckless fun and danger. Prevost assures that it isn't just for show.

Prevost says that offers are coming in from Spain as well as the States, though this wasn't his initial plan.

"I just wanted to do a cool record," he says — though he thinks he'll heed the call electrically and acoustically. "I like playing acoustic so people can actually hear what I'm doing. But I like playing loud, too."