No matter what your tastes, the 2013-14 classical season has a flavor for you 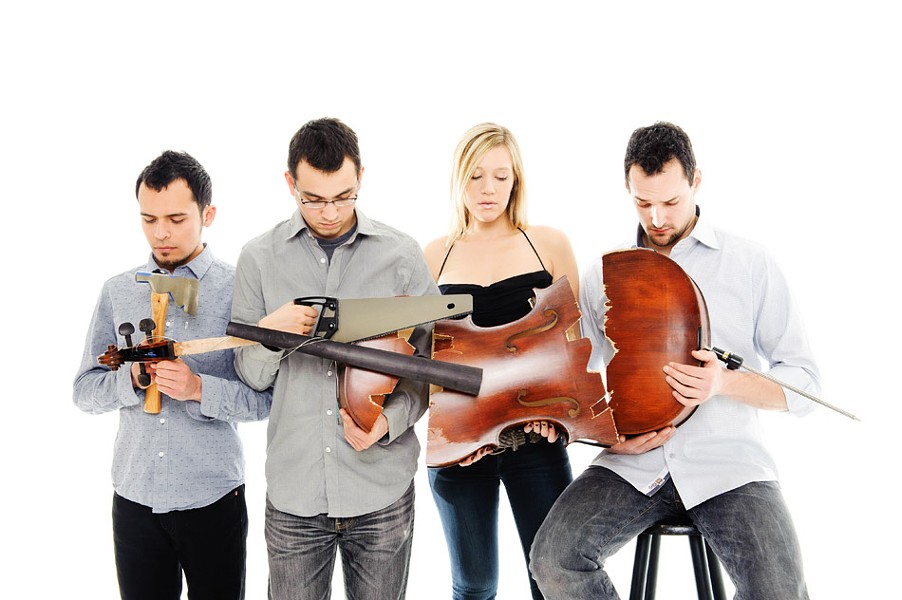 This is the first classical season since I started writing for City that I believe includes a concert and a composer for everyone. For someone like me, with far-flung musical tastes, it means I will be at concert after concert, throughout the entire season. So, allow me to offer three top picks on the season, and then I'll plunge into a robust overview.

If you elect to attend only one concert this season, make it the Ying Quartet with preeminent pianist Leon Fleisher on February 23, 2014. Fleisher's studies with Artur Schnabel rather famously trace back through Carl Czerny and others to Beethoven. Not surprisingly, Fleisher is perhaps best known for his attention to Beethoven, Brahms, and Mozart. Like pianist Gary Graffman, Fleisher performed works for left hand only for years, but did regain the use of his right hand. The Ying Quartet — as so many of you know — is the Grammy-winning quartet that sells out every Rochester performance through a combination of exquisite playing and excellent programming. I can only begin to imagine the beauty that will usher forth during this program, which will include the Brahms Piano Quintet. Check esm.rochester.edu for details.

A second concert pick, will be the performance of "Comala," the 2011 Pulitzer Prize finalist by composer Ricardo Zohn-Muldoon (January 2014). "Comala" is based on the novel "Pedro Páramo" by Juan Rulfo. Zohn-Muldoon's work is told through living characters who speak and dead characters who sing, with instrumentation running from marimba to maracas to thin glass rods.

My third concert pick for the season also comes out of the Eastman School of Music, which will be launching the J.S. Bach Cantata Series on September 21 (additional dates include October 20 and November 16). The performances will be as written by the composer, with one voice and one musician to a part. The series will include three performances per semester. Check esm.rochester.edu for details.

The 2013-2014 season for the Rochester Philharmonic Orchestra will progress under the batons of no fewer than 14 guest conductors in Kodak Hall at Eastman Theatre. Opening weekend, September 26 & 28, conductor Jun Märkl takes up Mahler's Symphony No. 1 ("Titan"), and that sets the programming intensity for approximately 10 of the 14 programs. The program I most look forward to, performed January 16 & 18, 2014, will pair Lili Boulanger's "Psalm 130" on the same night as Beethoven's Symphony No. 9 ("Choral," which includes "Ode to Joy"). The following program looks to be a delight, giving us conductor Fabien Gabel for "An Evening in Paris" with the music of Debussy, Saint-Saëns, Ravel, and Stravinsky (January 30 & February 1, 2014).

Also, put your attention to page 9 of the RPO season guide. There are two concert series that look excellent. One series is called "Musical Connections" and is held on Sunday afternoons at the Hochstein Performance Hall, Michael Butterman conducting. The programming goes from "Music and Art," with works like Mussorgsky's "Pictures at an Exhibition" (October 6), to "Music and Dance," including Piazzolla's "Tangazo" (March 2, 2014), to "Music and Literature," such as Debussy's "Prelude to an Afternoon of a Faun" (May 25, 2104).

The second RPO Sunday afternoon group is called "Baroque Sundays," and is also presented in the Hochstein under the guidance of Butterman. The programming includes Vivaldi's Guitar Concerto (November 3), J.S. Bach's Violin Concerto No. 1 (January 12, 2014), and Handel's "Royal Fireworks Music" (March 23, 2104). For more information and the full season visit rpo.org.

Do not underestimate the symphonic accomplishments of various other orchestral groups in the area, including the Eastman School Symphony Orchestra and Eastman Philharmonia, under the baton of Neil Varon. Every season, these free concerts in Kodak Hall include core favorites of Western classical music. Two highlights from their fall programming include a performance with the Eastman-Rochester Chorus of Mahler's Symphony No. 2 ("Resurrection") on October 18 and of Dvorák's "Te Deum" on December 6. A third highlight of their full programs is the Shostakovich Symphony No. 1 on December 11. For more details visit esm.rochester.edu.

The Penfield Symphony Orchestra, under the baton of David Harman, kicks off its season with music of Sibelius, Grieg, and Rachmaninoff on October 21 at Penfield High School. The orchestra's concert season also includes "All Things Scottish" (February 24, 2014) and "The Elegant English" (May 5, 2014). For more information visit penfieldsymphony.org.

Harman also conducts the University of Rochester Symphony Orchestra and the University of Rochester Chamber Orchestra. Their opening concerts take place during the university's annual Meliora Weekend on October 11-12, and include works by Larsson, Beethoven, Shostakovich, Maxwell Davies, and Respighi. For more upcoming concerts and details visit rochester.edu/College/MUR/ensembles.

Additional chamber music can be found through the Society for Chamber Music in Rochester. The opening concert on October 13, given in memory of Society Founding Artistic Director Richard Luby, is a special baroque concert featuring works of J.S. Bach and Jan Dismas Zelenka. Five additional concerts are offered this season, including one featuring guitarist Nicholas Goluses in works such as "Terzetto in D Major for Guitar, Violin, and Cello" by Paganini (January 26, 2014). Check societyforchambermusicrochester.com for details.

There are some additional choral works to bring to your attention. The Rochester Oratorio Society will collaborate with the Sankofa African Drum and Dance Ensemble and the Hochstein Percussion Ensemble for performances of the "Missa Criolla" by Argentinian composer Ariel Ramirez and the "Missa Luba" (March 14, 2014). ROS is presenting two additional concerts this season, "Choral Masterworks," including Mozart's "Requiem," to be performed with the Houghton College Choir on October 4 and 6, and "Liturgy and Legacy," to preview the concert ROS will perform on the road in several capitals and provinces of Eastern Europe (May 16, 2014). For details visit rossings.org.

Also on the list of area chamber orchestras, be sure to look for concerts put on by Cordancia (cordancia.org), Rochester Chamber Orchestra (rochesterchamberorchestra.org), Ad Hoc (adhoc-music.org), and First Muse (firstmuse.org).

Whether it's Broadway or the opera that you're after, turn to the Eastman Opera Theatre. This season's productions are "She Loves Me" (November 7-10), "Xerxes" by Handel (January 23-26, 2014), and "Dialogues of the Carmelites" by Poulenc (April 3-6, 2014); check esm.rochester.edu for details. Additional opera opportunities can be found through the Opera Guild of Rochester (operaguildofrochester.org) and the Rochester Lyric Opera (rochesterlyricopera.org).

The "cantata" form also makes its way into a performance by Pegasus Early Music through "Membra Jesu Nostri," a cycle of seven sacred cantatas by composer Dieterich Buxtehude (March 16, 2014). Each one of the concerts by Pegasus focuses on early music and early instruments, and is quite thoughtful, not the least of which is "A Woman's World," featuring women composers of the Baroque Era (November 10). Check pegasusearlymusic.org for more information. Publick Musick is also putting together its season of historically informed performances of music from 1600 to 1800 and beyond, so be sure to look for their concert announcements at publickmusick.org.

Also performing early music is Musica Spei. The group will again host the Rochester Early Music Festival, this year on November 8, which includes various ensembles and soloists from Rochester's early-music community. This season will also include a medieval play, all in chant, about the "Massacre of the Innocents" (December 14), a Lenten music concert, a Good Friday performance, and a spring concert that may explore the music of Spain in the old and new worlds. Visit wp.musicaspei.org for details.

More modern in your approach to listening? Then perhaps you already know the glittering gems of Musica Nova and Ossia at the Eastman School of Music. Combined, the groups are offering five concerts this fall, and the programming includes works you simply won't find anywhere else in town. Look for pieces by György Ligeti, Karlheinz Stockhausen, Unsuk Chin, and more. Of particular interest is the November 6 concert, programmed to include John Adams' "A Short Ride in a Fast Machine," Stravinsky's "Symphonies of Wind Instruments," and Harrison Birtwistle's "Panic." Check esm.rochester.edu for more concerts.

Also on the new-music scene, as per percussionist Ivan Travino, keep your eyes open for the official announcement of Break of Reality's 10th anniversary concert, which will be performed at Kodak Hall in January. Details to come at breakofreality.com.

Perhaps the best place to end is where you can begin. If you're ready to jump into classical music of the contemporary kind, your best bet for September is to find your way to the Eastman Rochester Organ Initiative Festival September 26-29. This year's festival will be devoted to organ music composed in the 20th century. Among the festival highlights will be performances of works by Grammy- and Pulitzer Prize-winning composer William Bolcom (who will be attending), by Swedish organist Hans-Ola Ericsson, by Austrian organist and composer Peter Planyavsky, and by German organist and composer Martin Herchenröder. Get the full schedule at esm.rochester.edu/organ/eroi. Worked around these festival dates will be the Westfield International Organ Competition and Academy (September 22-30), with performances in Ithaca and Rochester. Find out more at westfield.org/competition/organ2013.

Keep in mind: these are just some of the highlights of the 2013-2014 classical-music season here in Rochester. There are many more groups and soloists for you to discover and enjoy. My expectations are high that with such a diverse line-up, everyone should get up off the proverbial sofa for at least one concert this season, especially since so many are free, good will offering, or budget-conscious. Happy high notes!