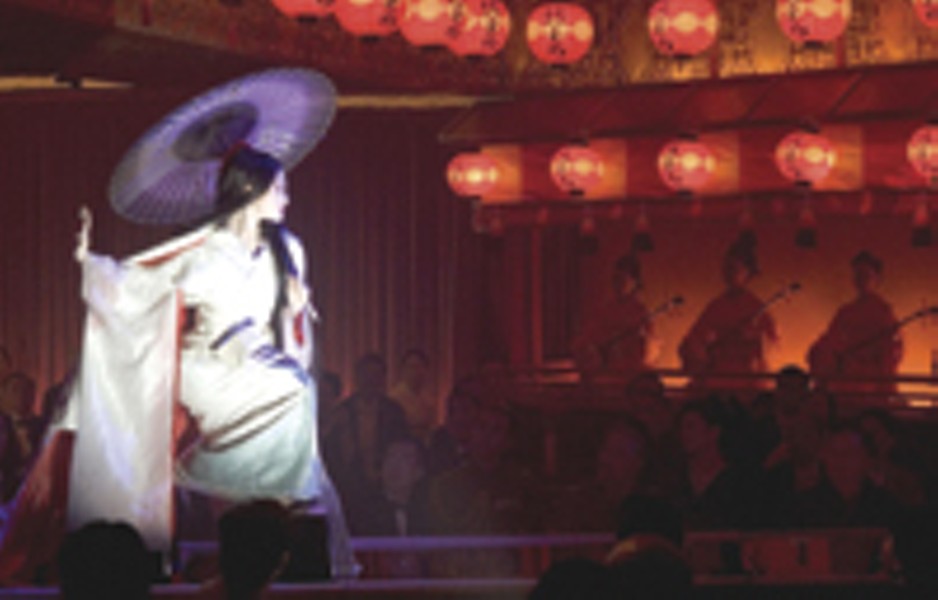 Columbia Pictures All this in platform shoes, too: Ziyi Zhang in "Memoirs of a Geisha."

I was poking around Fabrics & Findings the other day when I overheard one woman say to her coworker, "And a 45-year-old white guy wrote it!" Further eavesdropping confirmed that they were talking about Arthur Golden's bestseller Memoirs of a Geisha, and since its publication in 1997 critics and readers have all marveled at the way a Western man was able to get inside the head of the geisha, one of history's most enigmatic and misunderstood creatures.

It's taken eight years for Geisha to unspool at a theater near you (Spielberg was originally slated to direct), and director Rob Marshall (Chicago) has enlisted a trio of Asia's finest actresses to help him tell the story of a young peasant girl's rise to the top of the Kyoto geisha heap in the years leading up to World War II. That he used Chinese instead of Japanese actresses is the subject of a little controversy, but being that this is a big-time Hollywood production, we should just be thankful the names on the marquee aren't Roberts, Kidman, and Zellwegger.

Ziyi Zhang plays Sayuri, a young woman who, upon being sold to the okiya (geisha house) as a 9-year-old, immediately incurs the enmity of star geisha Hatsumomo (Gong Li, deliciously evil, if not a tad one-dimensional). Sayuri impresses Hatsumomo's rival Mameha (the serene Michelle Yeoh), who takes it upon herself to fashion Sayuri into an accomplished geisha, a deceptively grueling task that will turn Mameha's common charge into "a moving work of art." Among the men orbiting the now in-demand Sayuri are a scarred businessman named Nobu (the fantastic Koji Yakusho, from the Japanese Shall We Dance?) and his crony, known only as The Chairman (Ken Watanabe, Oscar nominee for The Last Samurai).

The book is a rich read while the movie is a slight but nonetheless entertaining Cinderella in a kimono, complete with triumph, hardship, and campy backbiting, all amongst astounding visuals. Director Marshall called upon his Oscar-winning production and costume designers from Chicago to re-create Kyoto in the 1930s and 1940s and gild these lilies in some of the most sumptuous fabrics available. And watch for the mind-blowing --- if slightly modern --- set piece in which Zhang's Sayuri performs a winter dance on sky-high platform shoes.

Zhang's performances have been hit or miss up until now --- 2046, her most recent, being a heartbreaking hit --- but her shaky command of English isn't sufficient enough to convey the depth of feeling necessary for this story. Yeoh, Zhang's Crouching Tiger costar, doesn't have the same language barrier, and her lovely performance as the classy Mameha anchors what occasionally veers off into over-the-top soap opera.

As the haughty Hatsumomo, Gong learned her lines phonetically, but her performance calls for neither subtlety nor sympathy and she is a devilish treat to watch in an all-too-brief role. Gong next stars for Michael Mann in his Miami Vice remake as a drug trafficker, which no doubt means more scenery-chewing. And since movies don't have to be flawless to be enjoyable --- Geisha being a prime example --- I can't wait.

Animators Don Hertzfeldt and Mike Judge have assembled an eclectic bunch of shorts for The Animation Show 2005, which features an international cast of ink, paint, clay, and CGI telling familiar stories in unusual ways. Some are funny, some are touching, and all are, to borrow a phrase from above, moving works of art.

The animation employed in Jen Drummond's The FEDS, about the Food Education Demo Specialists (the people who offer free samples) and their bizarre customers in an Austin, Texas, grocery store will look familiar to any fan of Linklater's Waking Life. Peter Cornwell's Ward 13 is an action-packed claymation piece best described as Lars von Trier's The Kingdom remade by Wallace & Gromit's Nick Park into a Tool video. The romantic cartoon Hello, by Jonathan Nix, focuses on a lovelorn boombox who goes to a wise old Victrola for advice after being smitten by a cute little CD player.

The highlight of the 12-film compilation was Bill Plympton's Oscar-nominated Guard Dog, a sidesplitting look at the danger encountered by a slobbering canine and his master during their daily stroll. The foreboding music coupled with the overprotective dog's wildly imaginative assessments of the possible threats (i.e., a girl jumping rope, a baby bird, a flower) may cause you to cross the street the next time a fluffy squirrel bounces your way.