Another take on the gangster 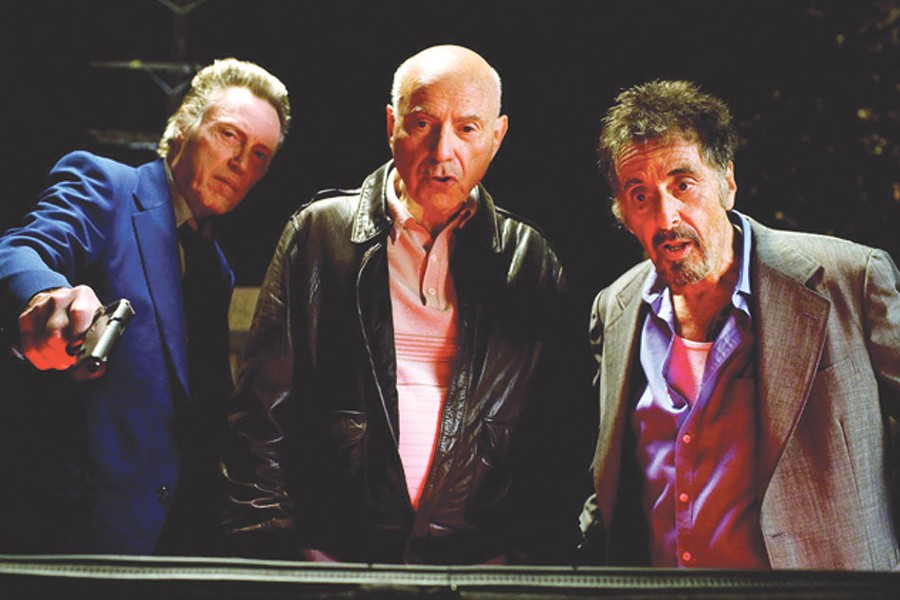 One of the pleasures of the new movie "Stand Up Guys" involves the connections between the roles the actors occupy and the actors themselves. The three stars, Al Pacino, Christopher Walken, and Alan Arkin, play aging criminals who reunite after working together many years ago; watching them in action, no viewer could ignore the fact that the trio themselves have logged decades in front of the camera. Veterans playing veterans, their careers provide an unusual context for their activities in the film.

The picture opens intercutting between Val (Pacino) going through the procedures of release from prison and his best friend Doc (Walken) painting landscapes in his shabby apartment, suggesting a drab sort of freedom contrasting with the gray walls of confinement. When Doc meets Val at the prison gates the action starts along a predictable path, with Val learning how much the world has changed during his years in the clink, and wanting to make up for at least some of that lost time with booze and sex and drugs. That quest leads to some sequences of silly farce when Val chugs down a bottle of Viagra so he can perform in his favorite brothel and ends up with an enduring erection that requires desperate treatment.

In the midst of the comical events, the characters and action move within the shadow of death. A true stand-up guy, Val took the fall for his colleagues in crime, serving 28 years without ratting on his friends, but a mob boss named Claphands (really), played by Mark Margolis, intends to have him killed in revenge for the death of his son in the job that put Val in prison; making it worse, Doc is the hitman. Resigned to the task, Doc allows Val, who quickly realizes the situation, to enjoy his hours of freedom, his last hours of life.

The pace picks up when Val and Doc steal a muscle car from some thugs, rescue their former driver, Hirsch (Alan Arkin), from a nursing home, and embark on a spree. Hirsch retains his old skills at the wheel, speeding all over Los Angeles, evading police pursuit, and enjoying his own visit to the brothel. Along the way the script piles on scenes and incidents to enliven the simple plot — a sweet moment when Val dances with a young woman in a bar, the rescue of a damsel in distress, revenge on a crew of thugs, and some time with a lovely young waitress (Addison Timlin) with a particular connection to Doc.

The mixture of comedy and violent action provides enough substance for the movie and Doc's dilemma contributes an unusual basis for suspense, but much of its entertainment grows from the performances of the three old pros impersonating three old pros. With some assistance from the crusty Arkin, Pacino supplies much of the silliness, but also articulates some serious philosophy about their mutual past and their delicate present; Walken behaves very much like his straight man, maintaining a deadpan in numerous close-ups, saying little, supporting his craziness, but concealing a genuine anguish over his assignment and his personal situation. The actors, who have never appeared together before this movie, create a striking contrast — the wild, loquacious Val opposed to the steady, taciturn Doc — and a good team in crime.

The characters finally solve their problems in a resolution that combines a good deal of sentimentality with an explosion of gunfire and glory. Both Val and Doc achieve something like redemption in a climactic sequence right out of "Butch Cassidy and the Sundance Kid."

Whatever elements of comedy and Western it employs and whatever else it accomplishes, "Stand Up Guys" demonstrates its indebtedness to the tradition of the gangster flick. Gangster films are brother films, and that relationship clearly defines the connection between Val and Doc; they also tend to follow a pattern of implacable fate, the doom that awaits Val at the hands of his friend, and actually awaits them both. It even includes the conventional scene of the gangsters acquiring new clothes, though in this case the pair break into a store and dress up in some classy stolen suits, a nice comical touch. It's not "Little Caesar "or "The Godfather," but it's fun.