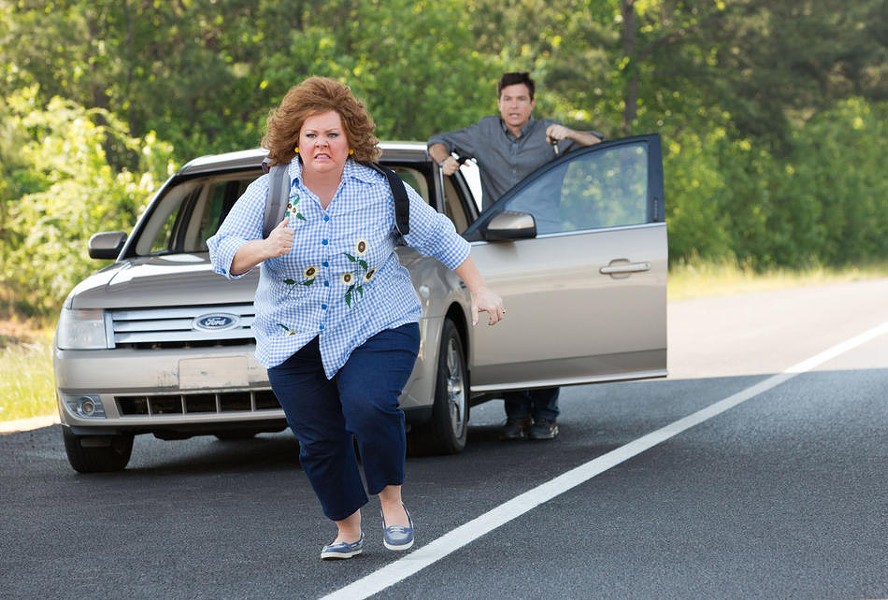 There's a scene late in "Identity Thief" in which Diana, the titular brassy, loud-mouthed thief, played by Melissa McCarthy, gets herself spruced up with a salon makeover, and we're meant to marvel at how nicely she cleans up, and what a pretty woman she is underneath the clown-like makeup in which she shellacks herself. The thing is, McCarthy's innate likeability and natural beauty shines through in every moment she's on screen, even through the giant fluffed-up hair and pounds of eyeshadow, so the scene comes across as completely unnecessary. It's characteristic of this scatter-shot comedy that doesn't trust the talents of its appealing stars. Instead it chooses to pile on increasingly ridiculous situations and supposedly hilarious hijinks.

A professional con artist, Diana is a serial identity thief whose latest victim is mild-manned financial analyst Sandy Patterson (Jason Bateman). Taking advantage of Sandy's androgynous name (which the movie finds hilarious to repeatedly make fun of, and it gets less funny every time), Diana steals his credit card number, racking up thousands of dollars in debt and getting herself into trouble with the police in Florida. Back in Denver, Sandy finds himself arrested for Diana's transgressions, and after fighting to prove his innocence, demands that the police track down Diana and bring her to justice. When the investigator informs him that interstate prosecution could take up to a year, and with his new job in jeopardy, Sandy decides that his best option is to travel to Florida and bring her back to Colorado himself. Once he does find her, the film becomes an odd-couple road-trip comedy in the vein of "Planes, Trains, and Automobiles," only significantly less funny.

Naturally, Sandy isn't the only one keen to get his hands on Diana. She's somehow also managed to incur the wrath of a drug dealer, who sends a couple of gun-toting criminals (Genesis Rodriguez and rapper T.I.) to take her out, as well as a redneck bounty hunter, played by Robert Patrick, eager to collect the reward for capturing her. For all the screen time devoted to these side characters (the film clocks in at a lengthy two hours), the side plots don't really go anywhere and exist solely to add some urgency to Sandy and Diana's trek before disappearing in the most anticlimactic resolution possible.

Director Seth Gordon ("The King of Kong: A Fistful of Quarters," "Horrible Bosses") orchestrates events with workmanlike skill, attempting to liven things up periodically, particularly with a well-staged car chase. But writer Craig Mazin ("Scary Movie 3," "The Hangover Part II") doesn't seem to be quite sure what tone he wants the movie to take, alternating awkwardly between outrageously crude adult comedy and heartwarming pathos. The script bends over backwards to make Diana into a sympathetic character, whose crimes are meant to cover the fact that she's using the money to fill the lonely void in her life. Her low self-esteem leads her to feel that she has to buy the respect of others.

The film's two leads do what they can to sell the material. Jason Bateman is adept at playing his usual straight-man role, reacting to the growing chaos surrounding him with exasperated disbelief. It's a performance that is not without its charms, but it's a role he could play in his sleep. This is clearly McCarthy's show, and she nearly single-handedly saves the movie. This is her first starring role since her career took off with the massive success of "Bridesmaids" (even earning an Oscar nomination along the way), and she makes the most it. There's no doubt that she fully commits to the part, and the eagerness and enthusiasm with which she throws herself into the physical comedy is a joy to watch. While the scenes of Diana pouring out her sad sob story aren't necessary, McCarthy finds ways to make them work. She displays a vulnerability in those scenes that proves she's got serious dramatic chops as well.

The movie doesn't need to work as hard as it does to make Diana likeable, McCarthy takes care of that all on her own. Now, she just needs to start choosing the kind of projects that are worthy of her considerable talents.