A movie about the making of a movie 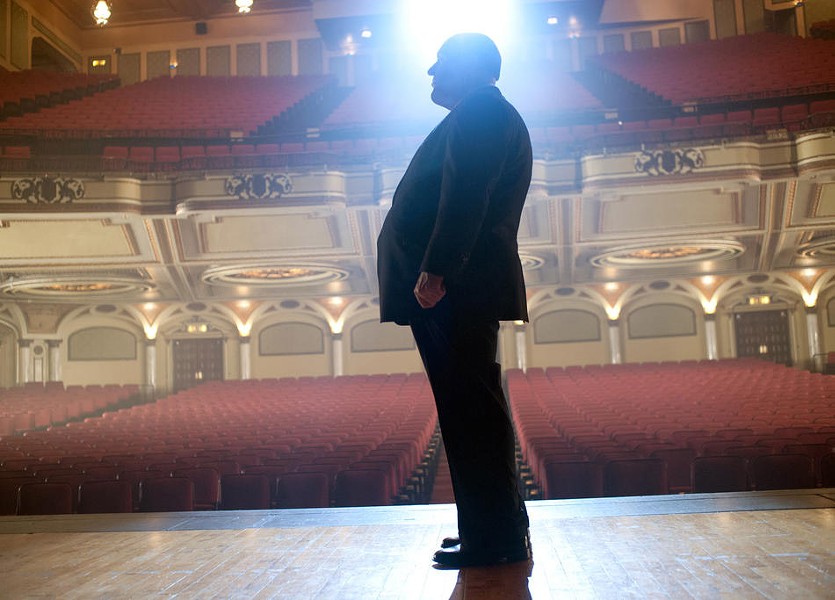 Long after his death, Alfred Hitchcock remains a surprisingly powerful presence in the cinema. Reruns of his extremely successful 1950's television series turn up regularly on one of the cable film channels; a recent made-for-TV movie, "The Girl," about his relationship with Tippi Hedren, who starred in "The Birds" and "Marnie," now plays on HBO; and right on its heels, a theatrical feature, another movie about a Hitchcock movie, simply called "Hitchcock," has just opened. The director apparently constitutes a one-man cinema renaissance.

Based on some of the immense amount of information about the best known and most written-about director in film history, "Hitchcock" deals with the production of "Psycho," one of his most successful and important pictures, which appeared in 1960, capping the richest and most creative decade in his remarkable career. While showing the several kinds of difficulties he encountered in bringing Robert Bloch's novel, based on the actual crimes of a particularly gruesome serial killer named Ed Gein, to the screen, it also delves into Hitch's own personal idiosyncrasies and his relationship with his wife and collaborator, Alma Reville. The marital story, most of it fictional, works much less well than the known facts about the making of a groundbreaking film that transformed the horror genre, conferring a new dignity and significance on an often scorned form.

Constantly battling the ridiculous production code of the motion-picture industry, Hitch (Anthony Hopkins) created some innovative methods of circumventing the censors, including tricky camerawork and inspired visual metaphors; in fact, in some ways the censorship inspired some of his most inventive cinematic ploys. To avoid the sight of a knife actually penetrating a nude Janet Leigh (Scarlett Johansson) in the famous shower scene, for example, he employed dozens of quick cuts, depending on the power of suggestion and his own skill at audience manipulation. Arguing that it was essential to the plot, he also convinced the censors to allow an actual toilet — and, shockingly, a flush — for the first time in Hollywood history. We've come a long way.

As the picture progresses, the making of "Psycho" displays some of the director's well known fascination with violent death, sexual deviance, and icy blondes, along with some of his personal traits — a kind of sad voyeurism, the need to control his leading ladies, alcoholism, the constant substitution of food for sexual gratification. By frequently showing dreams and fantasies in which Hitch converses with Ed Gein, the script magnifies his idiosyncrasies into something like a dangerous pathology.

Almost unrecognizable beneath pounds of prosthetic avoirdupois, Anthony Hopkins handles the character's wit and drollery with a nice offhand skill, but rather exaggerates his emotional side into hysterical melodrama. Often speaking directly to the audience in the manner of the television show, he captures precisely the thick, plummy voice, the carefully articulated speech, the asthmatic wheeze of the master in a performance that seems as much impersonation as acting.

As Hitch's neglected and longsuffering wife, Alma Reville, who wrote or consulted on many of her husband's pictures, Helen Mirren looks a good deal more attractive than the original, but conveys Alma's obvious intelligence and her perfectly understandable resentment at playing second fiddle to the great man. Her tentative, unconsummated relationship with a sycophantic screenwriter (Danny Huston) never seems convincing, except as an indication of her bitterness and unhappiness.

Aside from dramatizing material from the several biographies and the scores of critical studies, much of the success of "Hitchcock" grows out of the careful casting of a variety of actors as the crew of accomplished people who helped bring Hitchcock's vision to the screen. Scarlett Johansson makes a quite acceptable Janet Leigh and Jessica Biel in a blonde wig very closely resembles Vera Miles, the actress Hitchcock believed "betrayed" him by resisting his efforts to control her career. As Anthony Perkins, the immortal Norman Bates of "Psycho," James D'Arcy delivers the most convincing impersonation of them all — he looks uncannily like the actor and speaks with the same nervous hesitancy, the same winning sincerity, the same quirky speech rhythms and twitches. If "Hitchcock" affects his career as "Psycho" did Perkins's, D'Arcy may be doomed to playing an assortment of neurotics and crazed killers.