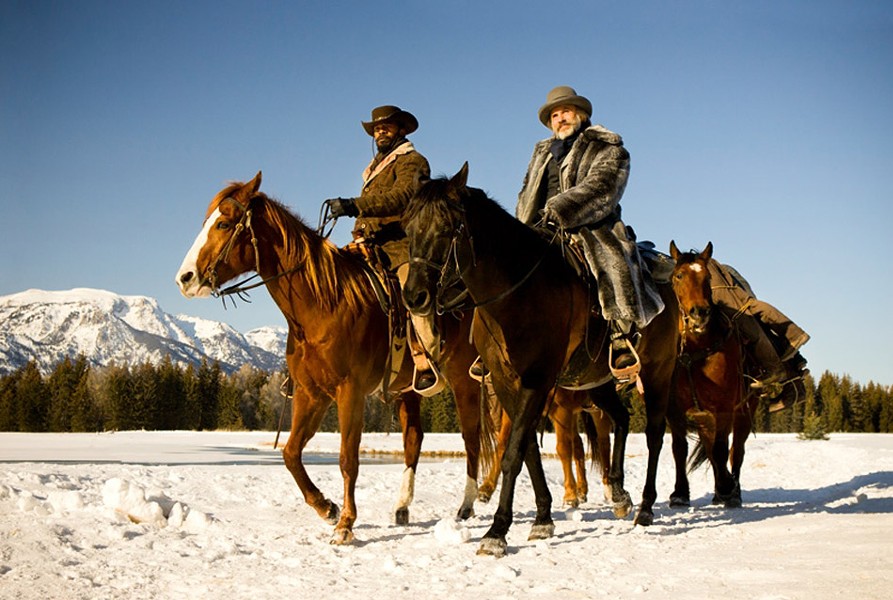 For reasons I have never fully comprehended, most of the critics, at least judging by the exclamation points in the advertisements, treat Quentin Tarantino like the second coming of Orson Welles, showering him with praise and adorning his films with all the usual awards. Although I have seen just about all of his movies, none of them lives up to the extravagant hype that always precedes them.

As director and/or screenwriter, his work, from "Reservoir Dogs" to "Grindhouse," from "Pulp Fiction" to "Kill Bill," from "True Romance" to "Natural Born Killers," displays numerous self-conscious allusions to other movies, a juvenile fascination with shock and violence, a self-protective tendency to parody, a grotesque brand of humor, and a weird combination of narcissism and nihilism. In short, he likes to splash the screen with fountains of blood, and then invite the audience to laugh at it.

Though smoother and slicker than much of his previous work, his newest film, "Django Unchained," exhibits many of the familiar Tarantino elements. A kind of homage to the spaghetti Westerns of some decades ago, whether intentionally or not, the film includes numerous anachronisms and inaccuracies that suggest a foreigner's shaky knowledge of the American past. It also depends upon the crude, exaggerated, and insensitive approach to brutality that so delights the director.

The film's essentially simple plot begins in Texas in 1858, when a somewhat comical, eloquent dentist-turned-bounty hunter, Dr. King Schultz (Christoph Waltz), accosts a couple of slave traders with an offer to buy one of their charges, Django (Jamie Foxx), whom he needs to identify a particular quarry. After a couple of shootings, accompanied by the smooth talking Schultz's justifications — he calmly kills a sheriff, for example, then explains to the vengeful townspeople that the man was actually wanted for murder — he trains Django in his profession. In the face of hatred and bigotry — the populace cannot accept a black man on horseback — he and Django become friends as well as partners and together proceed to conduct a profitable business in legalized murder.

Django's quest for his wife, Broomhilda (Kerry Washington), separated from him by slave owners, leads the pair to Mississippi and Candieland, the splendid mansion of the wealthy slave owner Calvin Candie (Leonardo DiCaprio), where the script reaches a grand climax that mixes the violent with the mawkish. Typically, the director paints himself into a corner and seems not to know how to end his movie, so he simply keeps piling on incidents and repeating himself, very like his methods in "Inglourious Basterds," which means the picture runs for nearly three hours.

The strange notion of a Western set in antebellum Mississippi creates a number of odd problems, like showing all the white Southern workers dressed like cowboys and sporting the six-guns of a later era and a different place. At the same time, it allows the director to show both the extravagance of the wealthy plantation owners and the inhumanity of slavery. He exploits his love of sadistic violence in the brutal treatment of various slaves, including a particularly horrible sequence of two muscular black men fighting viciously until one finishes off his opponent with a hammer: echt Tarantino.

Although he occupies the title role, Jamie Foxx barely changes expression throughout the movie, maintaining a grim passivity; he sits on his horse like a real cowboy, recalling that great Hollywood era when every actor learned to ride in order to play in Westerns. His underacting at least counters the baroque exaggeration of Leonardo DiCaprio, who employs a repeated series of gestures, accompanied by a smug grin, to establish the slick wickedness of Calvin Candie.

As in "Inglourious Basterds," Christoph Waltz holds the movie together, practically with his bare hands. His precise and ironic diction, flavored with a slight German accent, his droll character — he travels in a small coach with a gigantic molar on the roof — contrast nicely with the surprising abruptness of his quick draw and efficient dispatching of his quarry; he also demonstrates a certain necessary cold-bloodedness, perhaps left over from his Nazi officer in the previous film. Unfortunately, after three hours, the character and the performance grow almost as tiresome as the rest of the movie.