Mourning and hoping for my Rochester at looted Kicks & Caps

May 31, 2020
I woke up at 7 a.m. Sunday with a chemical sting from burst pepper balls still fresh in my throat and a throbbing in my back from a tumble I took running from an incoming tear gas canister.

City officials had called on community members to convene at Frontier Field at 10 a.m. if they wanted to help clean up from a long night of unrest and looting. Officials, including Mayor Lovely Warren and County Executive Adam Bello, had also called an 11 a.m. news conference to provide an update on the previous night’s chaos.

I couldn’t be in two places at once, so that meant a choice: picking up a pen or a broom. I opted for the broom.

Hundreds of Rochesterians chose the same.

After picking up some supplies at Frontier Field, I headed to Kicks & Caps on West Main Street. I’d driven past the apparel store countless times over the years, but its offerings of Air Jordans and fitted caps didn’t quite gel with my wardrobe of worn paisley shirts and Doc Martens.

The store was ransacked Saturday night — windows smashed and virtually every scrap of merchandise pilfered. But Sunday morning, dozens of volunteers gathered there to clean up the scene, starting by piling shattered glass into orange garbage bags. The people were white and they were black. They wore Black Lives Matters T-shirts, as well as Rochester Police Department uniforms.

I couldn’t help but feel a tinge of hope that better days were coming. The peaceful protest the day before gave me similar feelings until it devolved into mayhem at the Public Safety Building, when a group of largely white protesters — officials referred to them as “outside anarchists” who hijacked the demonstration — began destroying police vehicles. That behavior spurred aggressive crowd control measures from police officers wearing riot gear.
I have no desire to add to the unneeded white male calls for unity. I simply will never feel the pain of having my very existence be a controversial political issue, nor can I understand what it’s like to see people who look like me brutalized by police time and time again.

Every day I fear for the lives of many people I love dearly, and for the world their children will grow up in. People who are incessantly marginalized according to the melanin content of their skin. But I will never feel that pain, or the rage it ultimately spawned Saturday evening.

The killing of George Floyd by Minneapolis Police Officer Derek Chauvin was the catalyst for Saturday’s events, but Rochester has long had its own tensions around policing. Signs at the protest referenced Silvon Simmons, who survived being shot three times in the back by a Rochester police officer in 2016; Benny Warr, who was pulled from his wheelchair and beaten by RPD officers in 2013 after refusing to leave a sidewalk; and a recent incident where an RPD officer handcuffed a 10 year old during a traffic stop.

Underneath those tensions lie Rochester’s pronounced economic disparities, which can’t be ignored. According to ACT Rochester, the median incomes of black households are half that of white households across the greater Rochester region. In the city, nearly 40 percent of black residents live below the poverty line compared to just 25 percent of white residents.

As a white journalist, the pursuit of objectivity and impartiality, including race, can be a real challenge, especially in events as nuanced as those that unfolded Saturday.

Meanwhile, as a fourth generation Rochesterian, I mourn for my city. I mourn for the people whose peaceful demonstration was hijacked by bad actors. I mourn for the small business owners who were kicked while they were already down due to the COVID-19 pandemic. I mourn for the decent police who carry the burden of the rotten apples. And I mourn for our youth, who will likely see things get much worse before they ever get better. 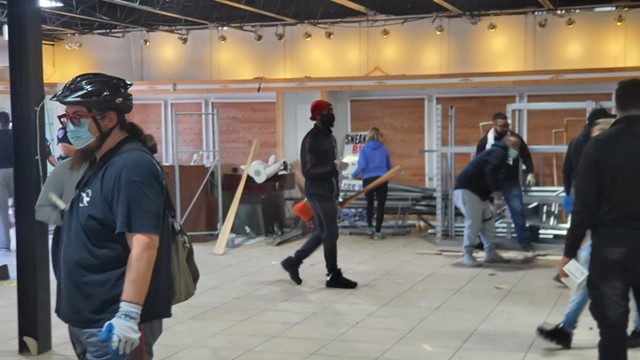 I spent much of Saturday night mulling where I fit into this puzzle. I believe good journalism is a public service, the same as cleaning up a looted shop, whose ultimate goal is to provide information that betters the public’s collective knowledge and inspires change. If a story serves no public good, or simply fills space, my time is better spent elsewhere. These are not always easy things to determine, especially in times like these.

Officials have once again put a 9 p.m. curfew in place for Sunday and they are bracing for unrest to continue. If and when it does, I will be there to do my damnedest to provide the public with information they need.

But I’m also happy to pick up a broom.