This year's iteration of Rochester Contemporary Art Center's "Members Exhibition" opened last week, packing the walls and pedestals with hundreds of artworks by the center's supporters. It's an excellent opportunity to get acquainted with the work of many new-to-you artists, including those who may not consider themselves such, displayed alongside works by more established creatives. And just like "6x6," RoCo's other annual exhibit of work by the masses, it's visually overwhelming and isn't made for a quick visit. So after about an hour of absorbing that show, I was happy to dip into the center's darkened and quiet mini-theater that's dedicated to video art exhibitions. 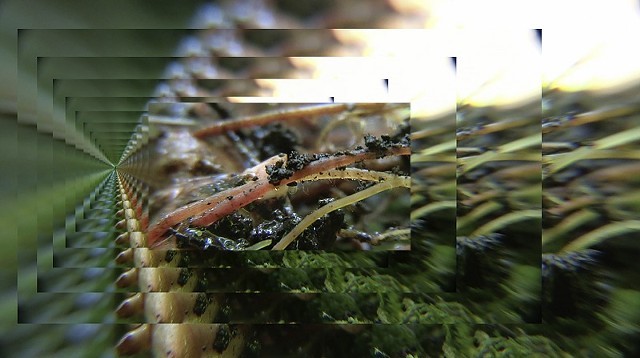 Currently presented at that space is "Earthen," a set of three short works that are gorgeous little meditations on our experiences with nature and time. Curated by Hornell-based artist and media arts writer Rebekkah Palov, the exhibition features artists who have all participated in the Electronic Media & Film Experimental Projects Residency at Alfred University's Institute for Electronic Art.

Britt Moseley's "Sunset" is a quietly mind-bending illusion. The camera seems to be focusing on a bank of towering, downy clouds as the warm globe of the sun rises from behind them, but as the light shifts over the clouds' surface, the fluffy substance takes on a grainier quality and morphs into a landscape that resembles a ridge of sand or a mountain range in shifting pastels.

Then the orb suddenly reverses direction and begins setting, its gliding course interrupted by a nearly undetectable wobble that tipped me off to the fact that it's a diorama, not a real vista. Moseley filmed clay slip and sediment in a tank of water, then puppeteered a desk lamp over the tank, transforming incredibly mundane materials into an incredibly ethereal scene.

I thought that one was trippy, until the next projection danced onto the wall: Anna Scime's "Understory" is a study of the minute details of flora and fauna beneath the forest canopy but each layered frame wheels away from the viewer into a kaleidoscoping retreat to the vanishing point. When the frame paused long enough to focus on a slug slooooowly extending its eye stalk, I joked to my friend, "Oops, we forgot to get high first." Droning and chiming sounds compliment what already feels like a meditation on the almost alien nature of nature, then a hand appears amid the fronds and detritus to dig up a bright fruit or root that looks a lot like blood and tissue. Which brought to mind a recent article about scientists who claim that plants emit an ultrasonic "scream" when distressed, which made my vegetable-loving heart hurt.

Finally, there's Eiko Otake's "Dancing with Moths," my favorite of the three. The stark and breathtakingly lovely piece is both a work of art and a documentation of the artists' night performance in the Canacadea State Forest, one of many performance-for-camera artworks she made during her IEA residency. Recorded and produced by Palov, the work features Otake standing against a black sky, her ghostly-pale face lit by mercury vapor lights that are attracting swarms of chaotically-wheeling moths. She holds branches of white hydrangea in her arms, which are raised up at tense angles, elbows jutting out. Curiously, though a spotlight is detectable just off-screen, the moths are drawn to her face and the flowers, and they settle at the corner of an eye or crawl amid the blossoms as she moves in an excruciatingly slow-flowing motion.

Her expression is at times jarringly anguished, her mouth jaggedly hangs open in an exaggerated yawn for uncomfortable amounts of time. She's the moon, she's an inscrutable wraith, she could play the part of a banshee if there had been any wailing instead of just a steady drone and electric blips that sounded like the flapping of tiny wings. In the curator's notes, the work is accompanied by an excerpt of Mitsuharu Kaneko's poem, "Moth," which alludes to the frailty of living beings and the longing for the respite of oblivion.